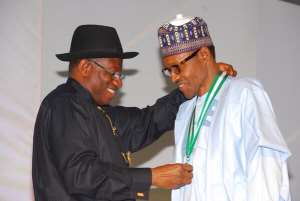 Once again, Africa has won. This is without doubt a milestone in African democracy as Nigeria the African most populous nation has come out successfully in her closely contested 28/03/15 general elections. This was once again to the great surprise and admiration of many western countries especially those that have still refused to liberate themselves of the negative mentality they have about Africa.

That was really historical. Nigeria for the past 16 years was ruled by the People's Democratic Party (PDP). This actually kept some of us wondering if the country indirectly was running a one party system. The outcome of the 28/03/15 elections was all round historical. Had the incumbent PDP under Goodluck Ebele Jonathan won, that would have been the first time a democratically elected president is ruling Nigeria for than 8 years. That is because President Goodluck Jonathan had to serve the remaining term of his predecessor 'president Omari Yar'adua' due to his demise on May 5th 2010.

On the other hand, the victory of Gen. Muhammadu Buhari also means for Nigeria the first time an incumbent president has lost his second contest since their return to democratic rule in 1999. But it is worthy to mention that, this is the 4th time Gen. Muhammadu Buhari the president elect of the federal republic of Nigeria has contested for the presidency (2003, 2007, 2011 and 2015 elections). He had also risen to power through a military junta and ruled the country from 1983 until 1985 when he was overthrown through the same means.

Not withstanding complains about the 'card readers' used to conduct the elections and many other issues, the Independent National Electoral Commission of Nigeria (INEC) under the chairmanship of prof. Attahiru Jega is held in high esteem for conducting the elections in a remarkably transparent free and fair manner.

As far as i am concerned, besides giving thanks and praises to God the almighty for His protection of Nigeria against conflict before, during and after the elections, the next person who deserves applauding is the defeated incumbent President Goodluck Ebele Jonathan. The man in my opinion is nothing short of a statesman. He even before the INEC collated 100% of the results had already called his contender Gen. Muhamadu Buhari to concede defeat and to congratulate him on the 31/03/15. He, couldn't have been more patriotic to Nigeria. Why do i say so? because his response to the election results meant a lot for Nigeria peace or otherwise. This is an incumbent i am talking about and you should know what that means. But will this have a relationship with the Ghana 2016 polls? Only time will tell. Ghana is very much matured in democracy but we still lack a perfect transparency in our electoral system. This suggests why the 2012 general elections almost turned chaos. I believe we still need to inject more transparency into the system to save us the electoral woes that we experienced in the 2012 polls. Only God knows how much the Nation's stand-still during the election petition retarded growth and development.

In that case, our state authorities should be very mindful who they give the chairmanship of the Ghana electoral commission to. I do not need to remind them to get a highly impartial, competent and patriotic person of foresight mindful of the financial loss Afari Gyan has recently caused the Nation on the District Assembly elections due to his sheer negligence and lack of foresight. The appointment should completely be devoid of partisan politics. We have to be fair to ourselves and future generations. I just hope the to-be commissioner carefully observed the courage, bravery, impartiality and the high intellectual display of Attahiru Jega of Nigerian INEC during the Nigeria polls.