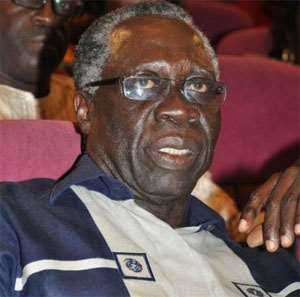 The NDC Government, drowning in a pool of corruption, incompetence and insensitivity to the plight of Ghanaians, in a desperate survival method characteristic of every drowning person has cluthched unto a weak straw.

In a display of a unique quality they possess, propaganda, they have sought to mitigate the awakening process that is currently sweeping across Ghana due to their ineptitude. They seek to score cheap political points as well as deepen the ethnic divisions in this country by way of the 'doctored' Osafo Marfo tape, a crime which they are the worst culprits.

They have also sought to get some breathing air since the persistent expression of disappointment by Ghainains is becoming a daily affair. So today, discussions about the hardships Ghanaians are going through is on halt whereas airtime and columns are dedicated to the issue of the tape.

Ethnocentric comments are without doubt condemnable and Osafo Marfo has indicated the tape was tempered. Indeed, he has explained at lengh what he said and actually intended.

In any case what is the fuss about? Is it to cover up the failure of this Government in alsmost every sector of the Economy? Is it the first time we are having issues with 'ethnic sensitive comments'? How about the worst comments made by His Execllency John Mahama, the father of the Nation? What about the negative comments about Muslims made by Fifi Kwettey? Did it affect the NDC's chance of winning in 2012?

The N.P.P. as a party has shown from its inception that it is a party for all Ghanaians with founding fathers from the North and South. The outcome of the Party's last Congress where Paul Afoko was elected ahead of some candidates from the supposed regions with resources is enough testimony to dissociate the party from any tag of ethnocentrism.

Also, Nana Addo has consistently placed Dr. Mahamudu Bawumia ahead of contenders from the supposed 'regions of resources'. He has consistently chosen the likes of Mr. Mustapha Hamid as his spokesperson and several other aides from across the country.

Furthermore the erstwhile Kufuor administration had numerous Ministers from across the country who managed the various sectors of the economy.

So it is an exercise in futility and pathetic when political oppurtunists and progandists in a desperate move to breath some fresh air from the heat of their own incompetence try to link the N.P.P. or Nana Addo to these comments.

They should know Ghanaians are fed up and are very much aware of their lies and deception. Their lies and spinning about the Free S.H.S policy is still fresh in our memories not to talk about their failures.

Ghanaians look up to Nana Addo and the N.P.P to salvage this Nation from sinking and no amount of spinning or propaganda can stop the wind of change and awakening.