Kufuor has brought dignity to the presidency -Envoy 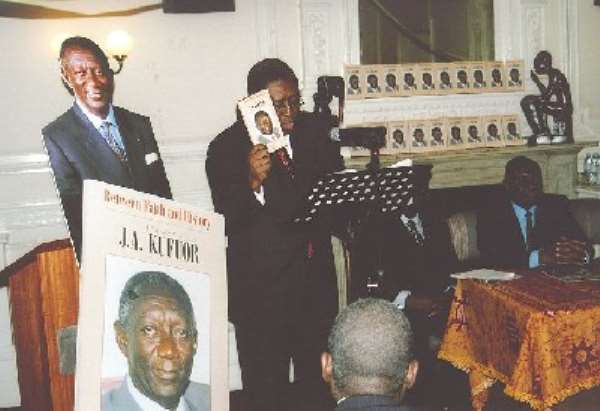 H.E. Mr. Isaac Osei, Ghana's High Commissioner to the UK has stated that President Kufuor's 'gentleness, style and demeanour' had brought dignity to the Presidency, notable characteristics which, he said, had made 'Ghanaians feel good and proud about their dear country'.

He said the President's inner strength, intelligence, capacity and steely determination' were factors which had made him to earn broad mass appeal and added that 'Ghana is fortunate to have a man with impeccable democratic credentials who firmly believes in the freedom of the individual'.

The High Commissioner added that the success of the President was an instructive lesson that those who aspired to high office should first acquire skills through appropriate education and general experience by serving in various capacities.

He declared: 'His story is that the highest office of the land is not attained by a sudden quirk of fancy or by other devious means but by hard work, assiduity and sheer persistence'.

These remarks were contained in an address he delivered to launch the new biography of the President entitled 'Between Faith and History' – A Biography of J.A. Kufuor. The 124-page book was written by Mr. Ivor Agyeman Duah, Minister-Counsellor (Information) of the Ghana High Commission in Washington.

Welcoming invited guests to the launch, Mr. Kwabena Baah-Duodu, Deputy High Commissioner of Ghana described the President as one of 'the greatest leaders Africa has produced' and added that the book had helped to answer questions on issues relating to the beliefs, experiences and vision of the President.

Nana Agyeman Badu stated that the President Kufuor's determination to succeed in all his undertakings was a cardinal principle of his philosophy.

He said the 'Man Kufuor is an embodiment of nationalism, a man who genuinely believes that nation-building is not only the preserve of the elected but the entire society working together to realise the aspirations of Ghanaians'.

Nana Agyeman Badu noted that the President's three and half years in office had broadly brought to the fore his conviction to work hard for the betterment of the people and the creation of a just democratic society for all Ghanaians based on freedom of the individual and the rule of law.

The author, Mr. Ivor Agyeman Duah explained the rationale for writing the biography and stressed the importance of publishing biographies to assist the people to know more about their leaders.

After his presentation, invitees had the opportunity to question him on various aspects of the book at the well-attended event partly sponsored by Nana Otuo Acheampong, Publisher of the Ghana Review International Magazine and Ghana Expo 2004, Atlanta.

Twenty copies of the book, autographed by the author, were auctioned at the event with the first copy being purchased for £500.00 by Mr. K. Ampratwum Sarpong, Chairman of the UK and Ireland branch of the New Patriotic Party (NPP). The second copy was purchased by Ms. Margaret C. Berko, a nurse midwife for £350.00 while Mr. Ofosu-Koree of Ghana Cocoa Marketing Company paid £200.00 for the third copy. The remaining 17 copies went for £50.00 per issue.

Nana Otuo Acheampong, Publisher of the Ghana Review International who conducted the auction said biographies were good sources of knowledge and inspiration. He added that through biographies people in search of information were given the opportunity to know how men and women had made it in their lives.