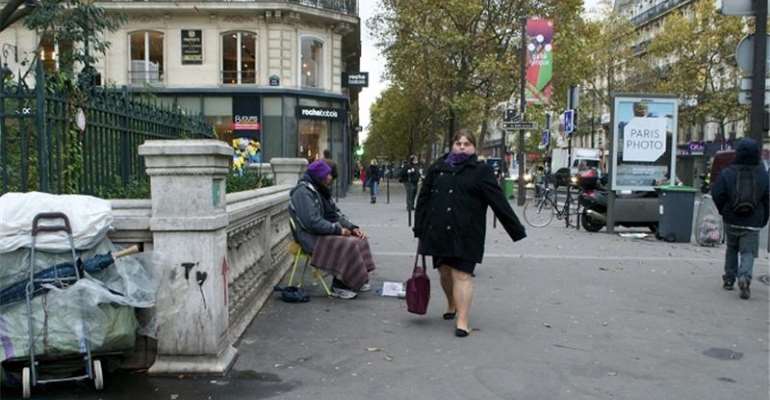 Paris, France - As the world's elite gather at the World Economic Forum in Davos, Switzerland, Oxfam has released a report detailing the widening global economic inequality: the wealthiest 1 percent now possess 48 percent of the world's wealth.

Inequality tends to evoke images of poverty-stricken countries, but this issue continues to afflict societies in wealthy nations, including Europe. Amid the backdrop of economic frailty, Europe is now home to the most billionaires in the world.

France, a country who prides itself on its equality, also struggles to close the gaps between its poorest and richest citizens. Paris, the emblematic City of Lights, is one of the most expensive cities in the world, yet is also home to 28,000 homeless people.

"Paris is a concentration of wealth. It is a place with an enormous divide between rich and poor," said Louis Maurin, director of the Observatory of Inequalities. "There is great fortune and great misery at the same time."

Many who struggle in Paris find themselves forced to beg in order to survive.

"Life in Paris is expensive," said Tsura, who declined to give her last name. "I have to stay in the street to earn money for my family."

'Segregation more visible'
Robert Nicolas has lived in Paris for 40 years. "Some say it is easy to ask for money in the streets, but it is extremely degrading," he said. "I never would have thought that I could ask someone for money like this."

Maurin said many areas of the city are poverty stricken.

"Paris is not only a bourgeois city," he said. "There are neighbourhoods in Paris with extremely high levels of poverty. The more divided the poor are from the rich, the more inequality we create."

Geography plays a pivotal role in the separation between social classes in Paris. As a whole, the city has a poverty rate of 14 percent, roughly the national average. However, another story of poverty emerges when the data is organised by neighbourhood, where the most underprivileged have a poverty rate of more than 40 percent, and the wealthiest sit at less than 9 percent.

"In the street, you really feel that the rich and the poor don't live in the same place or in the same manner. There are neighbourhoods where the people look down at you, disgusted," explained Nicolas. "For them, you are nothing. If they have a dog, the dog is better than you."

The northern and eastern parts of Paris were once the strongholds of the working class. Today, gentrification is inching towards these dwindling working class neighbourhoods. This change is led by the Parisian bobos (slang for bourgeois-bohemians), many of whom see these areas as trendy and more affordable.

This gentrification pushes the marginalised into the suburbs beyond the city limits. This ongoing displacement of the poor is one of the defining characteristics of rich-poor relations in Paris.

"Segregation is becoming even more visible in Paris," said sociologist Michel Pinçon, a specialist on France's elite. "The wealthy are in their arrondissements, shielded from poverty and far away from social problems. The well-to-do want this segregation."

In the heart of Paris, grandiose buildings dominate the skyline. The most striking feature of many of these buildings is their emptiness, evidence of the acute housing crisis, which is fuelled by secondary residences and empty office space.

The mayor's office under Anne Hidalgo has taken notice: It plans to turn 200,000 square metres into social housing over the next five years; and if owners refuse to rent, they will be fined by the city. The city didn't respond to repeated attempts for comment.

Because of this lack of housing and the rising costs of living, the homeless population has risen by 84 percent in 10 years.

"I stay in Paris because I grew up here, but the more time passes, the more impossible it is to live here. There are more and more homeless people in the street. Even people who live in apartments are begging. There we see that there is a real issue."

While emergency shelters are readily available, those without stable housing are required to call 115, the agency responsible for attributing beds, every day. "I had to spend 30 or 45 minutes on the phone. You call between 7am and 10am, but you have to constantly redial. When you finally get ahold of them, seven or eight times out of 10, you have a place, but two or three times you don't."

Sleeping on benches and heating vents are commonplace. "Sometimes we sleep in the streets on mattresses because we have no place to go," said Tsura. "If [my children and I] don't all have a space, we prefer to stay together."

After struggling daily for a bed for several months, Nicolas became tired of the system and decided to fend for himself.

"I sleep in a laundromat not far from here," said Nicolas. "I found it accidentally when I was looking for a place to stay. I have been sleeping there for the past one and a half months."

The Restos du Coeur is one of the largest organisations working in poverty alleviation in France. In Paris, volunteers distribute 2,200 hot meals in the streets of Paris every day, for a total of 600,000 meals per year. According to Michel Gueguen, the director of the Restos du Coeur in Paris, about 32 percent of those who use the services of Restos du Coeur are single mothers with children.

The number of beneficiaries has increased in the past six years. "Since the crisis, there has been an increase of 3 to 4 percent per year of the number of those helped. Before, people didn't want to get help, but now it has become less stigmatised," said Gueguen.

Other associations provide public showers and basic services, including breakfast, for those in need. "I like to stay clean and [110, the organisation] is well structured," said Nicolas. "You can take your shower, clean your clothes, and it allows you to keep a certain amount of dignity."

"I hoped my children would have a better life in Paris than in my village in Romania," said Tsura. "But, so far, life hasn't improved. We have no money."

Despite widespread rags-to-riches success stories, family origins are one of the most important factors in determining social status and wealth, especially for the upper and lower classes.

"Economists have observed is that there is still a significant amount of social mobility in the middle class, but at the two ends of the spectrum, the very poor and the very wealthy, there's less mobility," explained Professor Dalton Conley, an expert on wealth and future generations at New York University. "If you are very disadvantaged, homeless or in extreme poverty, it's next to impossible for your kids to escape."

Despite the unlikelihood of escaping poverty entirely, Nicolas remains hopeful that his time on the street will be limited. "I made myself two New Year's resolutions: I need to have a better life than in 2014 and I have to get out of here. That's all that I asked for."

When asked if he has kept his resolutions, Nicolas replied: "Frankly, January is finishing, and I haven't advanced. I wouldn't say I have gone backwards, but it has stayed the same. Nothing in my life has changed positively, and I am still asking people for money."