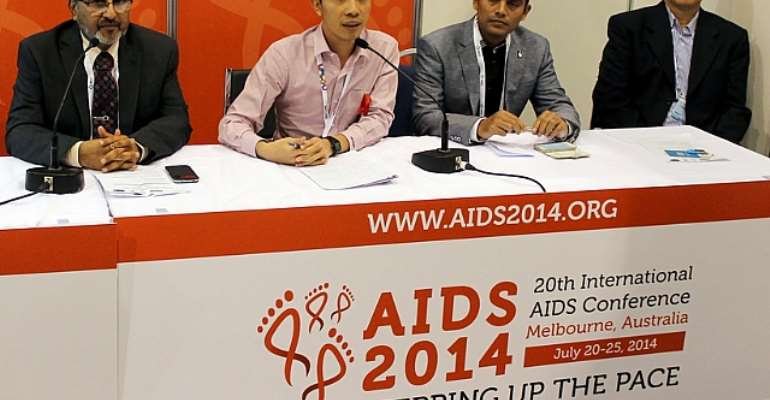 Despite overall progress in HIV prevention, rates of HIV infection among key affected populations such as men who have sex with men (MSM) and transgender people remain alarmingly high. For example, recent data indicates that MSM are up to 19 times more likely to have HIV than the general population - transgender women are almost 50 times more likely. Overall new HIV infection rates have dipped by 26% in Asia and the Pacific region since 2001,but not for MSM and transgender.

According to a 2013 UNAIDS report, estimated population of MSM in the region is between 10.5 million to 27 million. HIV incidence continues to remain very high among MSM in cities such as Bangkok, Ho Chi Minh City, Jakarta among others.

Midnight said: "Key affected communities should be in the heart of the delivery of services by the government, then only perhaps the impact will be maximal. Commission on AIDS in Asia (2008) had predicted that if no action was taken to increase the investment to MSM programming then they will account for nearly 50% of new HIV infections by 2020. That is a cause of serious concern. Punitive laws and practices that criminalize same-sex behaviour are still prevalent in many Asia Pacific countries. Such laws deter MSM and transgender people to have access to existing health services they need. We need to work on destigmatisation of healthcare services, and working with the law enforcers for supportive health policies. At policy level we need to advocate with the government, we need to ensure that policy barriers get removed so that MSM can actually access those services."

Investment continues to remain very low in MSM programming. "Less than 7% of the money is going for HIV prevention among MSM. To be strategic we need to increase investment for MSM programming especially younger MSM in cities" said Midnight.

Dr Ishwar Gilada, President of AIDS Society of India, and a noted HIV physician who was among the first few medical professionals who responded to HIV care when first case was diagnosed in India, was moderating this panel discussion at AIDS 2014. "Unsafe sexual practices among transgender women were rare at that time when I did my study with Hijra community in 1983-1984. We could never have imagined then that Hijra community will come to International conferences. People used to laugh at them when transgender people used to come to JJ Hospital for care. I started a special clinic in OPD from 2pm-4pm in 1983 at JJ Hospital for transgender people. Back then we used to write male or female H (Hijra) as sex, but it took decades for government to finally recognize the third gender."

Dr Badri N Saxena, Chair of Microbicides Expert Group of Indian Council of Medical Research (ICMR) said (via web link) that there is hardly any choice under national HIV or STI prevention programmes except barrier method such as male condoms (female condoms are limited to very few targeted interventions or other social marketing initiatives). Few more options are available in private healthcare sector such as vaginal creams. Dr Saxena pointed out that there are 30 million episodes of STIs annually. Dr Saxena also advocated for a need-based phased introduction of Pre-Exposure Prophylaxis (PrEP) to provide another option to MSM people who might benefit from expanded range of HIV and non-HIV STI prevention options.

'Invisible' key population
Dr RR Gangakhedkar, Deputy Director, National AIDS Research Institute, ICMR said (via web link) that according to the mapping estimates there are 0.412 million MSM in India. Overall HIV prevalence rate among MSM is 4.4% and TGs is 8.8% (2011). There are targetted interventions (TIs) for both key populations in India offering STI services, linkage with HIV testing and care services, condom promotion, peer education, outreach, among others. There are over 201 MSM TIs that include over 37 community-based organizations-led TIs. Coverage as per the MSM population estimates is over 70%. Additionally, a program named "Pehchan" is also being implemented. 20 TIs are exclusively for transgender people.

Dr Gangakhedkar added: Though the overall coverage is high among MSM TIs, very little is known about the coverage in 'invisible' part of MSM population. With re-criminalization of same sex behaviour perhaps more MSM may opt to be 'invisible'.

Stigma lurks
Although situation has changed some shades for the better, but still stigma in healthcare settings rages high and often blocks access to existing services for MSM and transgender people even today. Dr Venkatesh Chakrapani, Director, Centre for Sexuality, Health Research and Policy, said: "Knowledge about HIV and STIs is perhaps not that big a challenge because despite knowledge, condom use among MSM and transgender people is low. For example they may not like to use condoms with their regular partners. If I need treatment for anal STIs I need to disclose to the doctor that I am MSM. Likewise talking about partner notification and simultaneous treatment of STIs in both partners becomes a huge challenge if stigma lurks in healthcare settings in India. Another issue is that condoms are free but lubes are not. Including lubes will help with dealing with issues such as condom breakage and augmenting HIV prevention among MSM and transgender."

Simran too echoed concerns that current STI and HIV prevention options are not working well enough and uptake remains low. Condom negotiation is very difficult for a transgender person to do with a client or regular partner, said Simran. She identified high consumption of alcohol and substance abuse among transgender people in India as another key challenge that ups their vulnerability to HIV and abuse.

Dr Suwat shared that the first-ever phase-II extended-safety study (formally called MTN017) of a rectal microbicide in the Asia-Pacific region has begun in Chiang Mai, Thailand since February 2014. In total, there are 8 study sites including Chiang Mai, such as: CDC Bangkok (where study will commence very soon), South Africa, Peru and in US. The objective of this rectal microbicide study is to study the safety and acceptability of a rectal microbicide gel for now. This study will perhaps also give information on issues such as adherence of study participants to the study product. Depending upon the outcome of this study (if study product is found safe and acceptable) efficacy studies will be conducted later. In this study, every MSM and female transgender study participant will have the same duration of exposure (eight weeks) to three different regimens (with a one week gap between each regimen): oral Truvada/PrEP daily for eight weeks, rectal gel (reduced glycerin and tenofovir gel) daily for eight weeks, and sex dependent rectal gel for eight weeks (applied anytime during the window period of 12 hours before and 12 hours after having anal sex).

Brian Kanyemba, Desmond Tutu HIV Centre, Cape Town, South Africa said that phase II study of rectal microbicide (MTN017) has also started at their site which is the only site in Africa. 7 out of 24 study participants have been enrolled so far.

Jim briefed about "Global Lube Access Mobilization - GLAM". He said "Having safer lubes will not be enough unless policies and programmes start addressing access to lubes. This is how GLAM came into being. If we provide condoms to people and not provide lubes then it is a big problem because then people use whatever they can find and at times they use lubricants or products that are not condom compatible. Lack of condom compatible lubricants in Africa was acute. With no lubes people often resort to body lotions, cooking oil, pre-cum, creams or other things that are not necessarily condom compatible."

IRMA grants announced
Jim Pickett announced in this press conference that few grants have been awarded to some projects to advocate for national and local-level access to safe, affordable, condom-compatible lubricant in Africa to improve the impact of HIV prevention services. These projects are based in African countries such as Cameroon, Ghana, Kenya, Nigeria, Tanzania among others. This is the second year for IRMA to support projects in Africa. This year the grants are supported by amfAR, AVAC - Global Advocacy for HIV Prevention, COC Netherlands, and IRMA.

PrEP is recommended as an additional HIV prevention choice within comprehensive HIV prevention package for MSM in these guidelines. On use of PrEP by transgender people, Deirdre said that there needs to be more evidence before strong recommendation can be made for its use among this key population. Deirdre called for heightened advocacy around PrEP and noted that WHO guidance helps with agencies and funders but does not directly help people who want to access services. Lots of other issues such as barriers, investment needs, dearth of smart programming, lack of implementation science, etc must be addressed alongside rolling out the guidance.

Dr Seema Sahay, Deputy Director, National AIDS Research Institute (NARI), Indian Council of Medical Research (ICMR), who is a noted social scientist said: "We are focussing on how to reach 'hidden' MSM especially adolescent MSM as this population is also surfacing right now. This is one problem we will like to have some advocacy and challenge we face. We conducted a small qualitative study and realized that knowledge about PrEP is very low. 2/39 MSM had heard of that. There should be some education programme and advocacy for PrEP as message about PrEP has not reached majority of MSM."

Vijay Nair, who demonstrated leadership years ago in India to organize HIV positive MSM as a network called NIPASHA+. Currently he is involved with India HIV/AIDS Alliance. Vijay expressed concerns if new HIV prevention technologies will ever reach those MSM who are in need.

Discussions about these new HIV prevention technologies are often limited to global conferences or meetings with little ground work taking place in our countries. He expressed concern why it has taken over two decades to do female condom programming after US FDA approved it in 1993? PrEP was approved by US FDA in July 2012 but still there is no clear sense how PrEP will reach MSM in need. He agreed with Dr Seema Sahay's observation that there are 'hidden' MSM in India who are not part of (or perhaps do not want to be part of) targetted interventions for MSM, and PrEP could be an option for them.