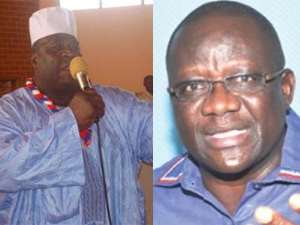 Mr. Bugri Naabu also accused the two party leaders of orchestrating the legal action instituted against the NPP by one David Hoezame, a former constituency chairman of the party in Central Tongu in the Volta Region, asking an Accra High Court to declare the National Council of the party not properly constituted.

Speaking on Okay FM's 'Adeakyi ebia' morning show Saturday morning, the 'no-nonsense' Northern regional chairman disclosed that the move was in line with attempts by Afoko and Agyapong to frustrate the party's efforts at winning the 2016 elections, with one of their objectives being to delay the holding of the party's presidential primary.

He fumed: 'It is a deliberate attempt to disorganise the NPP, a party we have toiled and suffered for; and we are not going to accept that. This court case is not to seek any good or justice; it is Paul Afoko himself who is taking the party to court. I will say it and say it again.'

That, Mr. Bugri Naabu said, was because 'I received the text on Wednesday evening. The text was from the national chairman. You can imagine, by Wednesday evening a lot of regional chairmen were already in town for the Thursday meeting. We were coming to fix a date for the flagbearership congress. It is a deliberate attempt because the national chairman has a stance that the National Council is not properly constituted.'

He stressed the belief that Afoko was being remotely controlled by certain unseen hands from afar.

'Can you believe that Paul Afoko can sit in Accra and call regional chairmen and try to dictate to them to change the representatives for National Council and put in his favourites?' he asked rhetorically.

'He called me again to change one lady we had agreed on for the National Council, Stella. This woman has been a member of the Council before I was even elected. We want people who are experienced and you tell me because she is not your favourite, I should change her; all because you want to among others change the leadership of the Minority in Parliament and want to use the National Council to do that. You can see that all they are doing and the people they want to bring in are for an 'Alan Agenda.' But this Alan is someone who immediately he loses always abandons the party.

'While the party was even battling, he was lobbying John Mahama so he gets a job at the World Trade Organization or whatever the name is, another time he loses and says he's resigned, so who should work for him to come and chop?' Bugri Naabu queried.

He maintained, 'No delegate would mind them. All the delegates are awake and wise.'

This, he said, does not augur well for the party since 'Ghanaians will not forgive us if we don't work hard to take over the reins of government from the NDC. Ghanaians will even curse us.'

Agenda 2020
The tough-talking Northern regional chairman told his host, Kwame Nkrumah Tikesie, in the 30-minute interview that there were indications that all that was being done by the chairman and the general secretary was influenced by the much-rumoured 'Agenda 2020' which is said to be a scheme by some top guns of the NPP to work to deny the party victory in the 2016 general election so they could take over the party in 2020.

'Well, we are hearing rumours that they have an agenda 2020. This agenda as I have heard is a plan to prevent the NPP from winning power in 2016 and for the NPP to only come to power in 2020. As to the reason why they will do this, it is best known to them. They are finding ways and means to kill the party,' he alleged.

But he vowed he and his colleagues would not allow certain elements within the party to send the party into a ditch. According to him, the anti-Nana Akufo-Addo machinations which were hinged on the objective of denying him the presidency, was inspired by the fear that the 2012 vice presidential candidate of the NPP, Dr. Mahamudu Bawumia, would eventually become leader of the party once Nana Akufo-Addo successfully serves his term as president.

'It is this hatred for Bawumia and the idea of a Northern flagbearer and NPP president that is driving leading members of the party to scheme and openly claim that they would do all within their remit to prevent Nana Akufo-Addo from becoming president.

Resolve
An obviously angry Bugri Naabu warned that if Paul Afoko and his other conspirators pushed the court case challenging the current composition of the National Council, then others would have no other choice than to seek a declaration from the courts that the election of Paul Afoko and the other executives was invalid since the same National Council members whose eligibility was being challenged for parochial interests, were the people who together with other delegates, elected Paul Afoko at the Tamale Conference of the party.

'If Paul Afoko is telling us that the vote in Tamale is null and void, then we agree. How can you have your cake and eat it again?' he wondered.

'I am even ashamed. When for once I thought that we had a Northern brother as national chairman for the first time so that this perception about the NPP being a Southern or Akan party will be killed; but rather all he has become is a trotro who moves in any direction the driver turns it. I am not the first person saying this, even at the last meeting at the hotel, the chairman of the Council of Elders made the same point. Paul Afoko is like a trotro; if the driver wants it to go to Ho, that's where it goes; if the driver wants it to head to Takoradi, that's where he goes,' he said with a warning; 'He should change his attitude because we won't tolerate it.'

That notwithstanding, he said, 'Apart from Tedem and apart from Alhaji Bin Salih, I don't think there is any other living member of the party up North who is more senior than I and so I will not sit down for the party to go into a ditch.  And above all, all they are doing is against Northerners.'

Worry
Bugri Naabu wondered why a national chairman who had been duly elected would act in a way that was clearly inimical to the party's chances and progress.

'Afoko was elected chairman and not as leader but even if Afoko is the leader and all he is interested in is sending the party to the cemetery, is it the best? If you are a leader and you are not interested in strategising for the party to win to redeem the suffering masses, and all you do is to hide behind your campaign team members to institute legal action against the party in court and you pretend you know nothing about it, is it ok?' he wondered.

'Afoko is really disgracing us Northerners. The last time, Tedem was so sad he even shed tears at a meeting due to Afoko's behaviour. The Upper East and Upper West chairmen and I, were all very sad and also close to tears – all because of Afoko's actions and bad intentions,' he said.

He further disclosed that the chairmen of the party in the three regions in the North (Northern, Upper East and Upper West) had earlier suggested a meeting with the national chairman so they could all work out a plan for the collective good of the party and work at it, but Afoko rejected that suggestion because it was not in line with the thoughts of his supposed masters who control his moves.

Issues
He could equally not fathom why and how the chairman and his general secretary had arrogated to themselves certain powers they do not have, with specific reference to the dismissal of Opare-Hammond as director of finance and replacing him with one Edwin Tetteh, a man known to be the campaign manager for Kwabena Agyapong when he was seeking election to the position.

'It is the NEC and the National Council that can decide who becomes director or who is dismissed as director, yet Afoko recently even went to the extent of locking the office of Opare- Hammond. He wants to sack this or that because they don't support Alan. The last time I told him that it was not a revolution but a democracy that brought him into his office and so he should stop behaving like when Rawlings staged the coup,' he emphasised.

'Afoko even wants to hijack the role of the Treasurer who was elected by all delegates at the conference, as he has banned the treasurer from receiving monies and appointed another man to do that,' he noted.

No Way!
Bugri Naabu charged: 'All Northerners should rise and stop him from running our name and image down. This is someone who doesn't even like Northerners. You remember what he did to Aliu? And he wants to do the same thing to Bawumia now, but it will be over our dead bodies.'