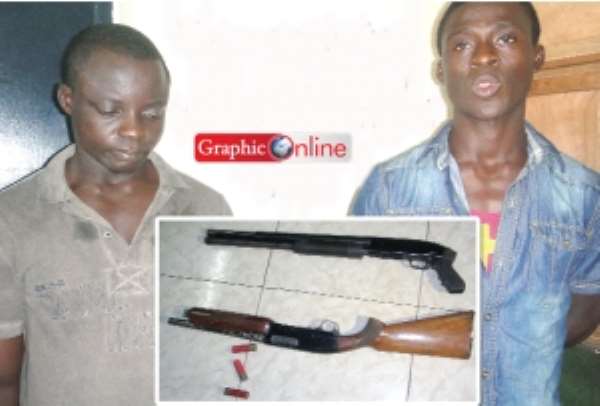 A man alleged to have been recruiting people for robbery operations at the National Theatre has been arrested in Accra.

Mayie and another suspect were Wednesday paraded at a press conference organised by the Accra Regional Police Command for allegedly possessing firearms without authorisation.

The police, after arresting the alleged kingpin, conducted a search at the venue of the recruitment and retrieved two pistols from a bag belonging to the suspect.

Upon interrogation, Mr Yohuno said, the suspect told the police that he had bought the weapons from one Allakwa at the Kokomba Market in Accra.

“Investigations are ongoing to ensure that all other accomplices who are connected to the offence are brought to book,” he said. Consequences of frustration

On Wednesday, the Director of the Faculty of Academic Affairs and Research at the Kofi Annan International Peacekeeping Training Centre, Dr Kwesi Aning,  expressed worry over the high unemployment rate in the country and said the situation was a recipe for the youth to be recruited into such operations.

He was reported to have said that when the youth felt excluded from the growing wealth and opportunities, it led to frustration and anger, making it easy to recruit them for all sorts of criminal acts. Gun Seller

Another suspect, Kweku Denkyi, 28, was paraded along with the suspect alleged to have been recruiting the robbers.

According to the Regional Police Commander, Denkyi was arrested on March 29, 2014 when he tried to sell a pump action gun concealed in a blue bag at Abossey Okai in Accra.

Denkyi is said to have confessed to the police that he had stolen the gun from an aunt with whom he had been living for 10 years and that he had wanted to buy a piece of land from the proceed from the sale of the gun. Robbers abandon weapons

In another development, the Accra Regional Police Commander said three men who were spotted by policemen on patrols about 3:30 a.m. on March 29, 2014 abandoned a plastic bag which contained a pump action gun and other implements suspected to have been used for a robbery operation.

He said the police suspected the men on the motorbike after they had sped off on seeing the police.

“The police chased them until they abandoned the motorbike and the plastic bag which one of them was holding,” he said.

The bag was found to contain a pump action gun, three cartridges, a plier, a pair of scissors, a black hat and a screw driver.