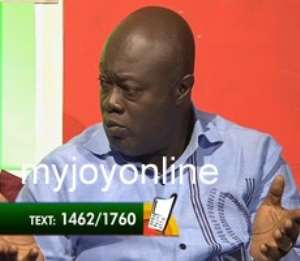 Former Member of Parliament (MP) for Asokwa constituency, Maxwell Kofi Jumah, has revealed that MPs are influenced to champion the cause of institutions on the floor of Parliament.

He alleged that about 98 percent of such institutions, which lobby MPs for support, are government agencies.

Kofi Jumah's confession comes on the back of similar allegations made by former Majority leader, Alban Sumana Bagbin.

The MP for Nadowli-Kaleo alleged at a workshop last week that some of his colleagues take bribes and come to the floor  of Parliament and articulate the views of their sponsors.

This has angered the MPs with many calling on him [Bagbin] to substantiate the claims or withdraw to prevent being hauled to the Privileges Committee.

But Alban Bagbin still stands by his claim accusing his colleague MPs of behaving like ostriches.

Speaking on Asempa FM's Ekosii Sen programme Thursday, Kofi Jumah said the former Majority leader  should not be 'hanged' for stating the fact because “lobbying is legalized bribery”.

“Alban Bagbin as a former Minority and Majority leader, has raised very important issues. He knows what he is talking about. Parliament must deal with it”, he exclaimed.

He said though some of the lobbyists don't directly give money to individual MPs, providing them support in return for favours is bribery.

“I agree with Bagbin. Saying that lobbying is not bribery is like saying death sentence is not murder”, Mr. Jumah pointed out.

The former Asokwa MP further stated unequivocally that Parliament will grind to a halt if such groups stop providing support.

Kofi Jumah said the bribery allegation should serve as a catalyst for Parliament to re-examine itself and  fund its own workshops as an autonomous body.