JJ Rawlings: In Ghana “I WILL BE REMEMBERED AS MANDELA” 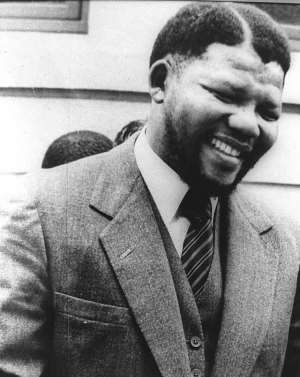 Many have called for African Leaders to emulate Mandela, and move quickly to free their people from poverty and other social menace. But unfortunately, those making this call are drawing comparison for oranges and apples. I respectfully disagree with their call, and here is why?

Mandela was a great leader, and one of a kind. For example, despite being the voice of many people, and sentenced to life imprisonment, he has refused to take the credit alone (rare for an African that take credits of others). He has consistently asked posterity to remember his works as a collective effort. What Mandela did for South Africans, and BLACKS in particular, cannot be emulated or be repeated. Freedom comes once, and anyone who tries to re-gain freedom for the same people that have been freed is a joker. Indeed we ought to give him credit for what he has achieved as an individual, and most importantly, how altruistically he controlled himself after becoming the first Black African President in South Africa. He never tried to repay any of his perpetrators with any evil, instead he demonstrated that forgiveness is greater than anger, and compassion much more valuable than vengeance. These are qualities that few leaders can demonstrate whenever they get the chance. As history tells us, former President JJ Rawlings could not allow these virtues to take root in him when he got the chance to deal with his “enemies”; he killed them all. Mandela's demonstrated values are what make him so great a leader and of course a unique one in history. Arguably, he is the greatest leader the world has known in our life time! I share this opinion.

Mandela's popularity made him a perfect candidate for politics. He became the leader of African National Congress, ANC, and eventually won the presidency in May 1994. Although he was advanced in age at the time, nobody could have made a case that his age disqualified him; in fact, it helped him. Accordingly, he must be held with every standard required of every President. And by these standards, President Mandela failed to curtail the rising issues during his tenure. HIV AIDS pandemic was out-of-control, affordable housing projects he promised his people was but a dream, common clean water was a luxury amenity for his people, blacks could not be contained (they killed each other without cause), and many other issues that BBC news reports were his failed legacy (www.bbc.co.uk). I know Mandela's sympathizers will be quick to point to his age or illness and one-term presidency as reasons for his apparent failures, but if that yardstick is a good measure of excuse then give President Mahama a 2nd term, let's forgive [late] President Mills for his failures, and let us accept that our youthful President Mahama's inexperience as legitimate excuse for his non-performing government and vote massively for him come 2016 with the hope that things will change. I can see you yelling at me, especially the NPP fanatics. If those excuses are not good enough then that is how I feel about Mandela too. Therefore, I ask that his Presidency should not be dragged into his leadership achievements. Presidency requires and needs great managerial skills; someone to manage our resources skillfully and maneuver us through the poverty of our mind, soul, and body as a friend put it. Mandela's record in that sense was a total train wreck; history confirms that, and legitimate source like www.bb.co.uk agrees.

So my point is, African Presidents don't need to emulate Nelson Mandela, aka, Madiba. Instead, what African leaders can do to take us to the ultimate destination (middle class status) is to study the ANC leadership (or Mandela as an entity) and incorporate some of their virtues while maintaining the status quo spelled out in our constitutions (which appears ineffective because we don't maintain them), improve upon their performance, and be listeners. For example, if African Leaders were to study Madiba, they will find out that these were not part of his ideologies as a public figure:

His ideologies and beliefs were:
Hope, Persistence, Justice, Equality, Freedom, Equal Opportunity, and Respect for all people. These beliefs/virtues/ideologies are fundamental to success in what you can do best as a public figure.

What we DON'T need in Africa is another Mandela “copycat” leader or set of leaders or a dictator. What we need are GOOD MANAGERS. For your information, the difference between a leader and a manager is that a leader challenges the status quo and forces a change for the people, AND a manager maintains the status quo, and has no power to change any thereof. In our modern democracy, power to force a change is invested in the people or the legislative branch (not the Presidency). As we know, prior to his Presidency, Mandela challenged the status quo, forced changes, and the changes remain as the foundation to our success [changes include FREEDOM, JUSTICE, EQUALITY, etc.]. The next generation must maintain and improve upon them. With this knowledge, I hope you now understand why I disagree with those calling for emulation of Mandela to lead African people out of poverty [of mind, soul & body]. He has already done the job, and no need for emulation but vital studies on his vision and goals for all people. Likewise, we can learn from his courage, persistence, and other traits that made him the greatest leader.

As you have read, I have not condemned or discredited Mandela's leadership achievements. I have argued that he is one of the greatest [if not the greatest] leaders in our century. I also want all his fans, including me, to distinguish his works as a leader that he was from the CEO (Manager/President) of South Africa that he became. In my humble opinion, his leadership skills did not translate successfully into his managerial skills. For that reason, it will be just to draw the line for posterity to know him as one of the greatest leaders the world has known rather than one of the greatest Presidents. He remains somebody I will want to emulate to force changes in the status quo but certainly not to emulate him to lead Africans from poverty. For that, I will have to study a westerner or an European. Africans still are in search for great managers (Presidents) who will manage our resources wisely, equitably, and productively. My case has been made. For your information, a friend once said he heard former President Rawlings say

“I WILL BE REMEMBERED AS MANDELA,” and I thought it will be an interesting headline to draw attention to my article. I have no way of confirming or denying this quote, especially when he alleged that the statement was made in the early 90's.

I always write knowing that someone out there may not agree with my views or may take the content of my expressions distasteful. Nonetheless, I ask that your counter-views be expressed with manners and courtesy. Insults and name calling bury your wisdom filled views. For the sake of healthy debate, please comment with clarity and profane-free tone.