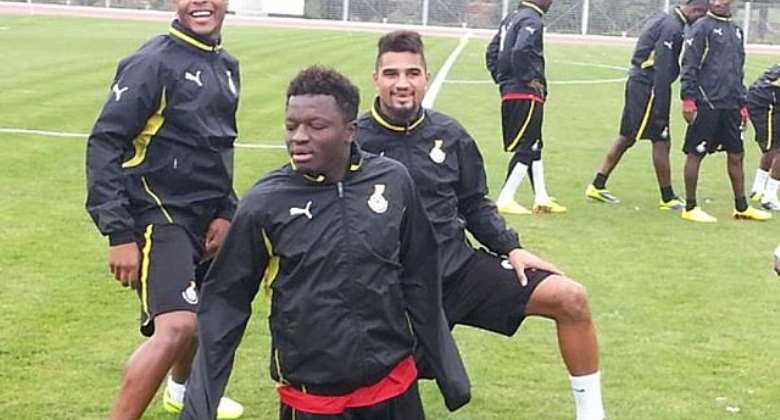 The question of 'can an African country win the Fifa world cup?' has shifted to the background and given way to 'when is an African country going to win the Fifa world cup?' South Africa 2010 presented Africans the best opportunity to coming close to kissing the gold platted cup. The storyline is all too familiar, and still fresh in our minds - by kind courtesies of Luis Suarez and Asamoah Gyan. Even so, we have yet another opportunity to make amends, to redeem our near glory, to establish our footprint and to silence our critics. It is TIME for Africa.

Although any of the 5 CAF's representatives - Algeria, Cameroon, Cote d'Ivoire, Ghana and Nigeria - is capable of taking Brazil by storm, I want to make a case for the Ghana's Black Stars. Pundits have predicted that if any African country will do better than the unfavorable prediction for CAF's representatives then it is Ghana, because of the precedents our boys have set. Albeit the elephants of Cote d'Ivoire, on paper, have the credential to exceed expectation, history has revealed that the Ivoirians cannot be gambled on. Still I wish all of them the best of luck!

THE Black Stars of Ghana - So far, the 25 million coaches we have seem to agree that the quality of selection we have in camp, the fitness level, the unity of the players and management in camp and mentality of all are good indication of good things to come. First of all, let me give credence to the Ghana Football Association -led by Lawyer Kwesi Nyantakyi - for their massive support for the team. Secondly, let me mention in exclusivity the man at the moment, who orchestrated our qualification to Brazil, and built excellent rapport between the Coaching Staff and the Black Stars players and the GFA and the Ghanaian populace. I am referring to his nobleness, Coach James Kwesi Appiah. Finally, I say kudos to all Ghanaians that stood up and called for an African Coach after the abrupt departure of Milovan Rajevac. Your unreserved support and ONE voice has vindicated the saying that 'the black man is capable of managing his own affairs,' {Dr. Kwame Nkrumah}.

So what is next? The cup is next; going past quarter finals is the minimum goal for the Black Stars. I have no doubt in my mind that we have the talents to stand our grounds against our group opponents - Germany, Portugal and United States. Speaking about talents, I want to isolate some of the players and talk about their envious skill sets and how they can use them to our advantage. Although strategic discipline will be the brain behind our victory, it is equally important that skills and teamwork are mentioned or encouraged in all of our discussions of tactical impudence. Coach Appiah has demonstrated above and beyond what he is capable of perpetrating but what we don't see often is the individual player confidence and skills display which used to be our style of play - similar to South Americans. The original Pele, Diego Armando Maradona, Messi, and this rising mega style - Neymar - are touted not because of their teamwork but because of how they are able to single handedly take the ball anywhere, maneuver through their opponents' defenses and score. They are also able to control the destiny of the game. These are what I want to bring to the attention of our young talents in the team - Andre Ayew and Christian Atsu.

First, ANDRE AYEW - like father like son - he has shown to possess, arguably, the same skill sets as his father, Maestro Abedi Pele Ayew. We have seen him occasionally displaying rare talents of his envious ability to hold onto the ball and dribbling his opponents to our admiration. Unfortunately, he hasn't been consistent in this area of his abilities in recent times. I can't tell if the Coach frowns on his ability to inject this skill set or simply an erosion of his abilities. This young talent must be urged and given pace to hold onto the ball to draw more opponents before releasing the ball to Gyan or Waris or if possible attempt a goal. This idea is no different from the likes of Neymar and Messi who are permitted to do likewise. People may see this comparison extreme but it depends on who you talk to. I personally believe the only difference between Andre Ayew and these mega stars is the fact that Ayew hasn't utilized his potentials or being urged to do so in the Coach style of play. Again, IF Andre Ayew is allowed free-will then we could maximize his tenacity and agility to add tactical option to our attacking tactics. No one disagrees that he is a real talent so why won't we use him to the max? Our success, in my humble opinion, partly depends on these young talents to do more beyond just being integral part of the team effort.

Second, CHRISTIAN ATSU - another Messi in the making - One of my fondest memories of him was when Ghana trashed Egypt 6-1 at the Kumasi Sports Stadium. Look at his goal - from a distance - after negotiating past a couple of Egyptian defenders to the left, he powered one to give Ghana an emphatic victory! Atsu is one of the young talents I would wish the Coach will psychologically uplift his confidence and urge to do more to give Ghana options. He has the skills like these other stars except that he lacks confidence to take charge of situation - at least in my opinion. Honestly, I don't blame him for his lack of zeal because he doesn't want to be another Asamoah Gyan - where Ghanaians turned against him when he disappointed. But that nonsense got to stop so these players can feel at home to have fun on the field. We have to loosen our strict expectation and seriousness when it comes to field activities. Let us remember it is a game of fun for majority of us, and of course money making for the select few. Atsu can be used interchangeably with Andre Ayew or in combination to give youthfulness to our team. It is not secret that Ghana has aging players {these are even paper ages!}. For example, our main stars: Gyan, Muntari and Essien have a combine age of 88yrs whereas Brazil's main stars: Neymar, Oscar and David Luis have a combine age of 71yrs - a whopping 17yrs difference.

In summary, Ghana has what it takes to cause a stir and silence those who frown on any chance for an African lifting the ultimate prize. I suggest a tactical approach that is made up of the young talents leading the team with a core midfield of experience players sustaining our opponents. In addition, let us forgive their possible failures in their exploration, in taking charge individually to do harm to our opponents. Let us minimize the expectation of victory at all times and watch from afar with open minded. Barring the publicity of witchdoctors and pastors stealing the spotlight for their alleged roles to play, I expect nothing but an improved performance over our previous 2 appearances. Enjoy yourselves. May God Bless the BLACK STARS of Ghana, May God Bless the Nation GHANA.

I write for fun, and nothing in this article is worthy of being cited elsewhere because all statements are purely based on personal views and observation. I will be glad to know few agree in principle what I put together for sports fans. Feel free to dispute in part or in totality the views experessed too. Thank you for reading.