Folks Like Hammah Make My Heart Bleed For Ghana 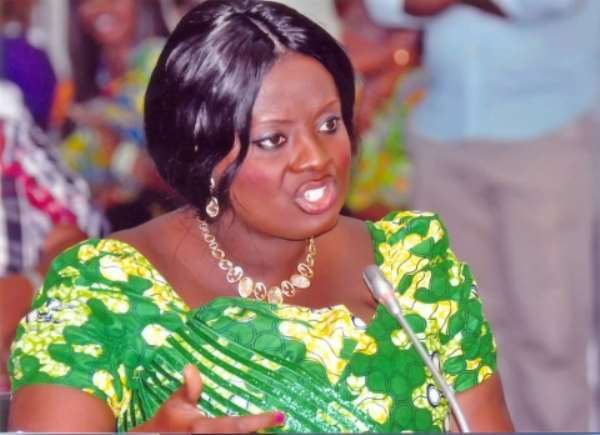 I have been significantly inactive on this forum for quite some time now; and the plan was to remain in hibernation till the end of the year. But how can I continue to hibernate and keep my enormously big mouth shut when the nation built and 'won for us through the blood and toil of our' parents and fore-parents continues to be ruled by empty-headed demagogues like Victoria Hammah, Nunoo Mensah and a host of others.

Just last week alone I received as many as 27 phone calls from friends and relatives in the beloved nation, expressing resentment and bitterness over the current almost unbearable economic situation in the country. They all used the imagery of a scorching sun to describe the present economic state of the motherland, and blamed their predicaments on the political elites. I rubbished their claim, sarcastically emphasizing that Ghana has been considerably hot since time immemorial, as I thought they were only exaggerating the situation so as to get a few quid off me as they usually do.

My friends and family were however vindicated when I woke up this morning only to be greeted by the damning news that Ms Victoria Hammah, one of the politicians fronting affairs from the top to the bottom (no sarcasm intended), has been fired apparently over an alleged leaked tape on which she is heard vowing never to quit politics until she has deflated the nation's coffers and the purses and wallets of hardworking taxpayers by one million dollars ($1,000,000).

Little did I know that the content of the leaked tape was in fact far more damning than I had anticipated. After listening to the recording which appears to be absolutely genuine, the only conclusion I am compelled to make is: if these are the kind of people leading a country that has produced some of the most prominent leaders the world has ever had (i.e. Dr Kwame Nkrumah and Mr Kofi Annan), then the nation is swiftly gliding like a stranded aircraft into a bottomless abyss, and the future of the younger generation is in limbo.

The way people express themselves or the kind of diction and vocabulary they use in a conversation can reveal a great deal of information (including the level of maturity and intelligence) about them. The impression I get of Ms Hammah from the leaked conversation, I'm afraid, is very unpleasant and unbecoming of a minister.

The content of the leaked tape compels me to liken the ex-Deputy Minister to, excuse me to say, an illiterate market seller who has all the time to gossip about insignificant issues; an immature Senior High School girl who boasts about her privileged position as a class prefect, her flirtatious relationship with her class teacher, and how much her class teacher loves her ahead of other girls; an incompetent new recruit who has no contract of employment and has absolutely no knowledge of her job specification; a swindler whose understanding of politics is unprecedentedly jaundiced and whose only aim is to hide behind the façade of politics to mercilessly loot institutions and innocent people; and an unintelligent young adult with almost zero leadership qualities and a seriously deformed notion of governance.

So how did an entity as inexperienced, childish and visionless as Victoria Hammah get a ministerial appointment? Well, her own leaked conversation seems to provide the answer: Like many other politicians, she was given the position not on merit but as a reward or an appreciation for some services rendered and/or still being rendered to the ruling party or some high party echelons.

Contemporary societies obviously love to see young people in high and responsible political positions. However, it shouldn't just be any young person, but a decent, mature, intelligent and visionary young adult. It is painful when society is let down by a politician, but infinitely agonizing when the politician in question is a young person who is expected to display a beaming lamp of hope.

To use Shakespeare's words, Victoria Hammah is 'a most notable coward, an infinite and endless liar, an hourly promise-breaker, the owner of no one good quality worthy' a ministerial appointment.

It could be argued that the recording of Ms Hammah's 'private' conversation with a colleague was a breach or an illegal intrusion of her privacy. I am not quite sure if any such laws exist in the country. But in a situation where public interest in the leaked tape tremendously override the notion of intrusion of privacy, I doubt if whoever recorded it, if identified, could be chastised by any court of law without provoking the anger of the general public and dragging the nation into a state of pandemonium.

If any Ghanaian thinks these politicians are concerned about their wellbeing, then they should think twice. I am glad Victoria Hammah is fired; but there are, without a single doubt, many more empty-headed and useless people like her in Mr Mahama's government. But is he prepared to flush these insensitive and visionless elements down the political water closet?

It is about time our president woke up to the fact that in the contemporary society, political positions are not distributed like toffees to inept die-hard party supporters, but competent and intelligent citizens.