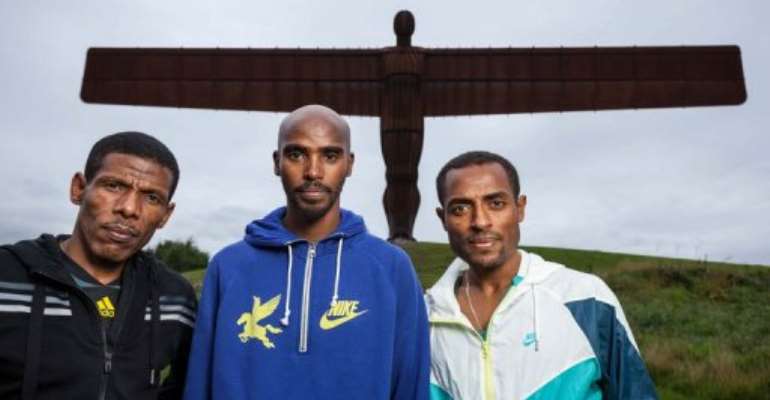 NEWCASTLE, United Kingdom (AFP) - Ethiopia's Haile Gebrselassie admits he was wrong to cast doubt on Mo Farah's credentials as a potential world-beater as the pair prepare to join Kenenisa Bekele in a fascinating battle in Sunday's Great North Run.

The trio meet in a competitive environment for the first time in the 13.1 mile race from Newcastle to South Shields in the north-east of England, and Gebrselassie confesses that Farah's rise to global pre-eminence as the back to back Olympic and world champion at 5,000m and 10,000m has taken him by surprise.

Asked whether the 30-year-old Briton should now be regarded as one of the all-time greats of distance running, Gebrselassie, the two-time Olympic 10,000m champion and multi world record-breaker, replied: "Of course. There's no question about that."

"Nobody expected it," the 40-year-old added. "You will remember a few years ago I said, 'Mo, I know you are fantastic but the Ethiopians and Kenyans are too good'.

"But he did it. In sport, it's like that. This is the good thing about sport."

Such has been Farah's dominance since he was outsprinted by another Ethiopian, Ibrahim Jeilan, for the World Championship 10,000m crown in South Korea in 2011, it would be a major surprise if he were to lose on home ground.

Including the 5,000m final that followed in Daegu, Farah has won five successive global championship (Olympic and world) titles on the track.

The Londoner eased back on his training for a week in the wake of his 5,000m-10,000m double at the World Championships in Moscow in August but has since been preparing for the world's biggest half-marathon, which has attracted a 56,000 field, at high altitude at Font Romeu in the French Pyrenees.

He has won both of the half marathons he has contested to date, prevailing in 60min 23sec in New York in 2011 and in 60:59 in New Orleans in February this year, and the Great North Run is a stepping stone towards his debut at the full marathon in London in April.

"I had a great track season and this race is one I always wanted to take part in," Farah said. "It will be nice to end my season at home with the crowd behind me. It should be a great race.

"It's an honour to line up against such great guys in terms of what Haile and Kenenisa have achieved in athletics.

"Take me out and those two guys head to head is a great race. But to have three athletes from a different era - Haile, Kenenisa and then me - it's really exciting."

While home hopes are high of a first British men's winner since Steve Kenyon triumphed in 1985, the women's race is likely to be a head-to-head between the Ethiopian arch-rivals Meseret Defar and Tirunesh Dibaba, respective winners of the 5,000m and 10,000m world titles in Moscow.

Latest Photo Reports
Catch up with all the political quotes from our politicians.
Advertise here
More Africa
ModernGhana Links
African players in Europe: Salah scores to share Golden Boot lead
Fired-up All Blacks chase Rugby Championship whitewash
Bekele reveals plan to run marathon in under two hours
Working session of the Technical Committee for the selection of beneficiaries of the Young Graduates Internship Programme in ECOWAS institutions, 2021 edition
Niger speeds up efforts to build first hydroelectric dam
Soul-searching for Boks ahead of 'special' 100th All Blacks clash
Mandela to 'House of Pain': Five epic Springboks v All Blacks matches
'God Has a Dream': top seller for Tutu's 90th-birthday auction
The race to vaccinate: why Africa is struggling to get Covid jabs
TOP STORIES