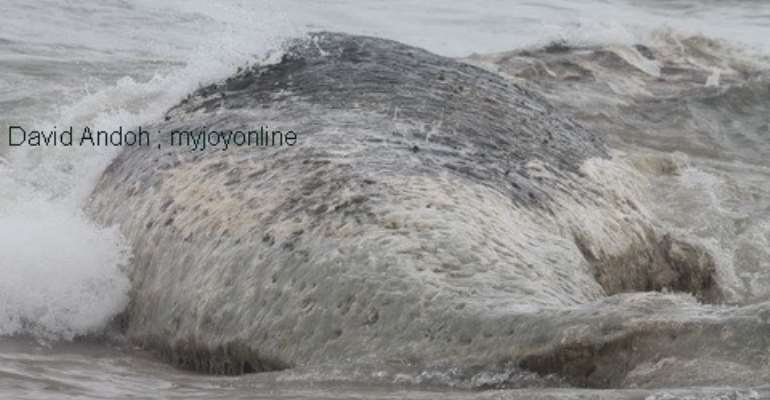 Fifteen dead whales have been washed ashore between 2008 and 2013 in the Western Region since drilling of crude oil started in 2010, Emmanuel Ohene Marfo, a deputy Western Regional Fisheries Officer of the Fisheries Commission, said .

According to him, dead whales being washed ashore was becoming rampant and called for proactive measures to check it.

He said a dead baby whale was found along the beach of Asemnda in the Ellembelle District last week and another one was washed ashore on September 2 at Essiama, both in the same district.

Mr. Marfo said most of the whales and marine life that were discovered dead were found close to the oil rigs which gives credence to the suspicion that oil drilling could be a possible cause of death of the mammals.

He said the oil companies did not perform any fisheries impact assessment before drilling started as the law required and criticized the Environmental Protection Agency (EPA) for failing to perform their duty.

Mr Marfo mentioned some possible causes of death of marine life in the area as colliding with vessels, excessive noise in the sea, parasite infestation and normal death.

He appealed to EPA to live up to its responsibility by compelling the oil companies to conduct the fisheries impact assessment in order to protect the country's marine resources.

Kwadwo Kyei Yamaoh, Programmes Officer of the Friends of the Nation, a non-governmental organization based in Takoradi, said the frequent death of whales and other marine resources required scientific research to ascertain the cause.

He said such endangered species needed protection from the state and appealed to the government to take stringent measures to protect them.

Some inhabitants in the Region expressed worry over the trend and appealed to all the stakeholders in the fisheries sector to dialogue in order to find a lasting solution to the problem.