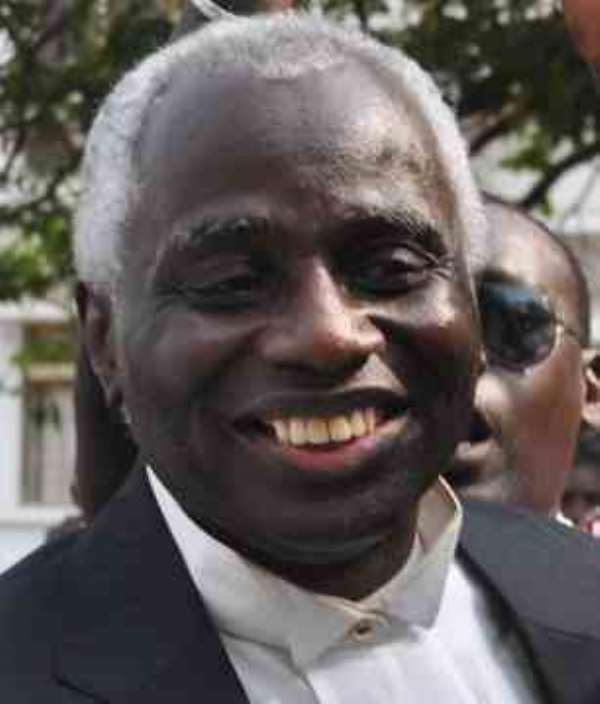 I have, on numerous occasions, heard people refer to Mr Tsikata as a legal and academic luminary. Some have even gone to the extent of arguing that he is the greatest legal scholar Ghana has ever had. I have always admired people who aspire to and/or achieve academic greatness; and so learning that Mr Tsikata was an academic giant automatically made him one of my most admired people in Ghana even though I have never met him before.

However, if the ability to make sound or logical propositions or comments is a sufficient criterion to employ in measuring people's (particularly lawyers) level of intelligence and wisdom, then Tsatsu has failed to make the grade; and he has failed badly. As a matter of fact, his recent comments are compellingly and rapidly sinking into oblivion the huge admiration that I have for him.

He refers to Justice Anim Yeboah as a 'consistently' dishonest judge who did not take up what he (Tsatsu) would 'call a truly balanced judicial posture in relation to the matters that were before him'. This conclusion is drawn from his so-called observation that the judge was persistently against the NDC's application to join the suit against President Mahama as a party, and also took 'positions against everything that was put forward from' the side of the NDC. The most bizarre aspect of the premises from which his conclusion is drawn is the fact that the justice in question also voted against the Respondents in three of the six pleadings of the Petitioners when the judges sat to deliver the final verdict of the case.

What planet is Mr Tsikata living on? He claims that Justice Anim Yeboah persistently took positions against the Respondents; and yet admits that the justice in fact voted in favour of the Respondents in three of the six pleadings of the Petitioners during the final verdict. Doesn't the second point defeat the first? Does Tsatsu really understand the authentic meanings of the terms 'consistent' and 'persistent'?

We now know that Justices Atuguba, Gbadegbe, Adinyira, and Akoto- Bamfo voted against all the six reliefs sought by the Petitioners; and Justice Baffoe- Bonnie ruled against five. So if the premises from which Tsatsu's inference (that Justice Anim Yeboah is bias) is drawn are anything to go by, then Justices Atuguba, Gbadegbe, Adinyira, and Akoto- Bamfo are among the most bias and untrustworthy judges Ghana has ever produced, as they were the most persistent and consistent in voting/ruling one-sidedly or against one particular party.

If Mr Tsikata, an obvious exponent of the 'naming and shaming' philosophy, is as truthful as he wants the world to believe, and honestly believe that voting or ruling persistently against one party in a court of law is tantamount to bias or dishonesty (which I disagree), then why didn't he name and shame these four individual judges? Is it because their 'dishonesty' was in his and his political party's favour?

Mr Tsikata is clearly guilty of the very accusation that he is levelling against Justice Anim Yeboah. If a veteran lawyer (a potential judge) who claims to be championing the cause of unbiased and reputable judicial system in his country is this bias or dishonest himself, then there is a massive question mark somewhere.

Mr Tsatsu again childishly claims that Justice Anim Yeboah's supposed persistent bias against the Respondents (particularly the NDC) is inspired by the fact that he was appointed by President Kuffour, former leader of the NPP.

I have no doubt in my mind that the decisions of many of the judges were influenced by political affiliations; and it is probable that the decisions of Justice Yeboah, just like many others, were politically motivated. However, that which respectable and decent academics wouldn't do in public is to illogically, unjustifiably and baselessly accuse and vilify a judge, as Tsatsu has just done.

I gather that at least five of the nine judges who handled the presidential election petition, including Justices Atuguba, Gbadegbe, and Akoto- Bamfo were appointed under the NDC government headed by Mr Rawllings and the late Prof Mills. If this is true and Tsatsu's reasoning is again anything to go by, then these three judges' persistent positions against the Petitioners were influenced by their sense of allegiance towards the NDC. So why did Mr Tsikata fail to mention this? I understand Justice Adinyira was appointed a Supreme Court Judge under the NPP government; how does Tsatsu explain the fact that she voted against the NPP in all the 6 requests.

Tsatsu has not only betrayed his intellectual deficiency, but has also exhibited a considerable degree of hypocrisy and/or cowardice. He claims he had evidence and knew from the very beginning that Justice Anim Yeboah was going to favour the Petitioners. Why didn't he voice it out and challenge Justice Yeboah's inclusion on the panel as the Petitioners did with Justice Atuguba? Why is he bringing this out only after the judges' verdict? Your guess is as good as mine.

He is publicly accusing Justice Anim of letting 'political partisanship be the determinant of positions' he takes, when he (Tsatsu) knows full well that at least two of the four judges who voted in favour of the Respondents in all the six pleadings were politically influenced; and that his own verdicts would be heavily politically motivated if he ever becomes a judge.

Tsatsu Tsikata certainly holds a personal grudge against Justice Yeboah; and he probably thinks the only revenge is to use every opportunity, even the slightest, to belittle his legal integrity. But in so doing, he slips into the pit of intellectual blunders unbecoming of an academic and a lawyer of his calibre.

Even though I never expected the Supreme Court to rule against the Respondents, I was hugely disappointed in the judges for the poor way and manner in which they concluded the case. I expected the panel, in their concluding statement, to acknowledge and compliment the efforts of the Petitioners' legal representatives, and to come up with specific points and observations that would kick-start immediate massive electoral reforms in Ghana; but this, as we all know, never happened. All we heard was ' the Petitioners' case is dismissed'; just like that.

It is apparent that the NDC, represented by Mr Tsatsu Tsikata and the Vice President; the NPP, represented by Sir John and the flag-bearer; and in fact a number of other Ghanaians do not trust the verdicts or judgements of Ghanaian judges whose objectivity has been disabled by their massive involvement in partisan politics. It is about time the constitution was amended so that future presidential election petitions are heard by a non-Ghanaian or an international court.