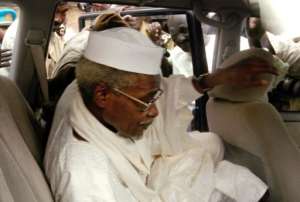 DAKAR (AFP) - Hissene Habre, detained by Senegal on Sunday in the first step towards a trial for war crimes, is known as "Africa's Pinochet" for his eight-year rule over Chad which began and ended in violence.

Typically dressed in combat fatigues, which earned him the nickname "desert fighter", Habre fled to Senegal after he was ousted in 1990 by Chad's current President Idriss Deby Itno.

Habre's reign was marked by fierce repression of his opponents, including alleged torture and executions, earning him the comparison with ruthless Chilean dictator.

An official truth commission report in 1992 accused his regime of committing some 40,000 political murders -- although only 4,000 victims have been officially named.

Habre was born the son of a farmer in 1942 in Faya-Largeau, northern Chad, and grew up among nomads in the Djourab desert. His natural intelligence led him to gain a local official post before leaving for France to study in 1963.

In France, he studied law in Paris as well as attending Sciences-Po, the city's prestigious political science school.

Returning to Chad in 1971, he joined the Chad National Liberation Front a year later and became its leader, before breaking away to form another rebel group, the Northern Armed Forces (FAN).

He made international headlines in 1974 when he kidnapped a French ethnologist for three years, forcing France to negotiate for the hostage.

A staunch nationalist, Habre then went on to serve as prime minister in the government of president Felix Malloum and as defence minister under his sometime ally and later president Goukouni Weddeye.

But his ties with Weddeye did not last: Habre broke from his old ally months after the formation of Weddeye's 1979 government, triggering a civil conflict in N'Djamena.

He was forced to flee the capital for eastern Chad in 1980 but returned to fight his way to power in 1982.

After more years of fighting, his reign ended as dramatically as it had begun when Deby -- a general formerly loyal to Habre -- led a force of rebels that drove Habre from power, forcing him to flee to Senegal.

Habre had lived freely for over 20 years in a Dakar suburb with his wife and children, where he is seen as a discreet, pious and generous neighbour.

The African Union had mandated Senegal to try Habre in July 2006, but the country delayed the process for years under former president Abdoulaye Wade despite an agreement to create a special court to try him.

Habre, 70, is also wanted for trial in Belgium on war crimes and crimes against humanity charges after three Belgian nationals of Chadian origin filed suit in 2000 for arbitrary arrest, mass murder and torture during his 1982-1990 regime.

Belgium issued an arrest warrant for him in September 2005, and he was arrested in Senegal shortly after, but the African country announced that its courts did not have competence to rule on a Belgian extradition request.

The AU decided the trial should take place in Africa, which will make Habre the first African leader accused of atrocities to face justice on home soil rather than in an international court.

Nkoranza youth clash with police over ‘suspicious’ murder of...
46 minutes ago