Christians are the Epitome of Hypocrisy, Research Shows 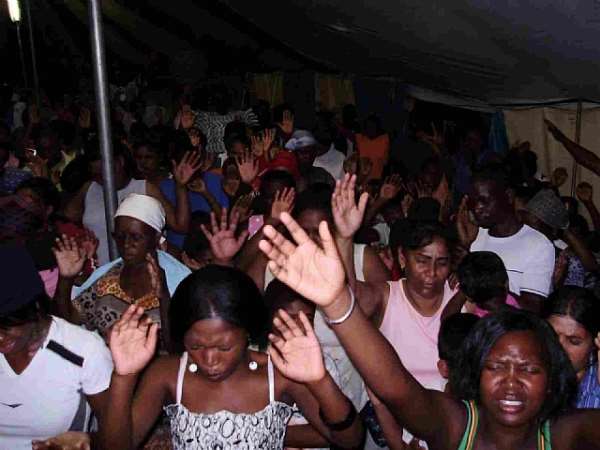 A quick survey recently carried out by a team of two Ghanaian researchers has revealed that most contemporary Ghanaians, Nigerians and possibly Africans, go to church primarily for immediate economic prosperity and the attainment of other earthly desires, and not future heavenly reward or eternal salvation, as society is made to believe.

The survey which was conducted between 22nd May and 19th June 2013 in Ghana and the UK, sought to establish the real factors responsible for the dramatic upsurge of Christian church attendees among modern-day Africans, using Ghanaians and Nigerians as a paradigm (case study). The research was driven by the recent incident at the Synagogue Church of All Nations' branch in Accra in which at least 4 people lost their lives following a stampede.

A total of 520 African Christians, aged between 18 and 79, took part in the survey. 320 of the interviewees were female and the remaining 200 were male. The gender imbalance (with regard to the research sample) was due to the reluctance of and the huge difficulty in convincing the men approached, to participate in the survey. It must be emphasized that the term 'church' or 'Christian church' is understood in this study as a place or house where Christians congregate for religious activities.

The research commenced on the assumption that the attainment of eternal life is the ultimate motive for the participation in church services. Thus, people of faith go to church primarily to know and/or deepen their knowledge and understanding of the word and will of God; to express appreciation for some favours enjoyed from God and to praise Him; and to solicit more favours including divine protection, as well as guidance and strength to be able to do the will of God so as to be allowed entry into paradise someday. This assumption was inspired by the researchers own experiences as members of certain Christian religious denominations, and the outcome of a diligent review of literature on the subject.

Respondents were encouraged to mention at least three key reasons why they go to church. They were constantly reminded to differentiate between what they do in church and why they, as individuals, go to church. But aware that a direct question like this may not motivate honest and credible responses, the researchers followed it up with several other simple and indirect but significant questions.

So in addition to the main question, the researchers sought to know how often each believer or church attendee (respondent) went to church; the number of Christian denominations each belonged to; the age range (18-24, 25-29, 30-39, 40-49, 50-59, 60-69, 70-79) and gender of church-goers (respondents); their marital and employment statuses; whether or not they had kids; their social rankings; and what their three key wishes would be if God were to guarantee instant fulfilment of those wishes.

The intention was to deduce a more credible conclusion from the responses to these indirect questions after a meticulous analysis. Even though highly sensitive questions such as those on immigration statuses (in the case of the diasporians) and health conditions were avoided, some of the respondents spontaneously made reference to them in response to the last question which sought to know their three key wishes.

Shockingly, only under 10% of the participants, in response to the first question, mentioned salvation (the desire to go to heaven) or the determination to avoid hell as a reason for going to church; and a critical analysis of the responses to the other questions paints an even more startling picture. The following is a summary of the statistics and findings unearthed.

As already mentioned, just less than 10% of the respondents, in reaction to the first question, gave responses that directly suggested that future heavenly reward was a primary reason for their decision to go to church. Fellowshipping (which majority of the respondents defined as seeking companionship based on shared interest and/or socializing), listening to or knowing God's word, worshiping (praising), and seeking encouragement, were identified by respondents as the key factors apparently drawing them into church buildings. Surprisingly, and quite hypocritically, no respondent named the yearning for economic prosperity or certain material things as a motive for going to church.

About 306 of the respondents said they belonged to more than one Christian denomination and/or attended church services more than once a week. It was also established that over 81% of these people were female aged between 25 and 39; and most of them fell within at least two of the following categories: unmarried, unemployed, part time workers, childless, working class, and irregular immigration status. Could this piece of data suggest that the craving for work or economic success, marriage, fertility (children), legal immigration status, and similar others are significant factors motivating people to go to church?

117 people said they usually attended church services once a week. Interestingly, about 77% of this category of respondents were married or in serious relationships; and a considerable percentage had kids and were in full-time remunerative work. It is quite reasonable to state that a good number of these people presumably attend church services weekly as part of their marital obligations.

About 97 people said they attended church services at most once every two weeks, once a month or once every year. 77% of these people were male, and were mostly employed and living alone (single). But since many of them were single, one would expect them to be regular church attendees as that would perhaps enhance their chances of getting partners. So could this be a confirmation that African men are less religious than women? Is it suggesting that a significant number of African Christians who are in full time employment have less interest in church services? This piece of data, like the others, is opened to various subjective interpretations.

In response to the last question which required respondents to mention what their three key wishes would be if God were to guarantee instant fulfilment of those wishes, economic prosperity or wealth (including decent employment) was the dominant wish (about 97%), followed by long life (63%), then marriage (42%), wisdom (34%), deliverance and protection from instruments of darkness (including witchcraft) (27%), and others.

Most shockingly, only 5 people named entrance into Paradise as one of their key wishes; and this was in fact quite consistent with the earlier data where only fewer than 10% of the respondents mentioned eternal life as a reason for going to church. Could this be a hint that 'Christians' themselves are not fully convinced of the existence of heaven and hell?

Were respondents thinking that the phrase 'instant fulfilment' meant asking for immediate death if they named attainment of heaven as a key wish? Could this consequently mean that Christians in fact want to go to heaven but not without first enjoying earthly pleasures for a considerable length of time? So does this portray Christians as people with massively contradictory desires: longing for heaven and not wanting to die?

'Seek first the kingdom of God and His righteousness, and all other things will be added to you' (Matthew 6:33); these are the words of the author of Christianity. However, the exact opposite of this divine instruction, seems to be the philosophy of contemporary African Christians as the survey demonstrates. It is apparent that future heavenly reward or eternal life is no more the foremost and proximate desire of the present-day African Christian, but economic prosperity and earthly gratification.

It is obvious that by placing considerable emphasis on earthly satisfactions such as financial and economic breakthrough, marital success, long life, protection from evil entities, child-bearing, legal immigration statuses (in the case of those living abroad), and the search for solutions to various other problems, Christians consciously or unconsciously (inadvertently) relegate the divine promise of paradise and threat of hell to the background.

Despite the small sample size (which the researchers admit is a marked limitation), what this quick survey suggests is that African Christian churches, particularly those that focus on the 'prosperity gospel' are highly likely to lose a considerable number of their congregation, and clerics run the 'risk' of preaching and ministering in almost empty buildings should the economic situations in African countries significantly improve and church members succeed in attaining the fleeting earthly prosperity and successes that they 'secretly' desire. If this is the future of Christianity in Africa, then African Christians are the perfect epitome of hypocrisy and deception.