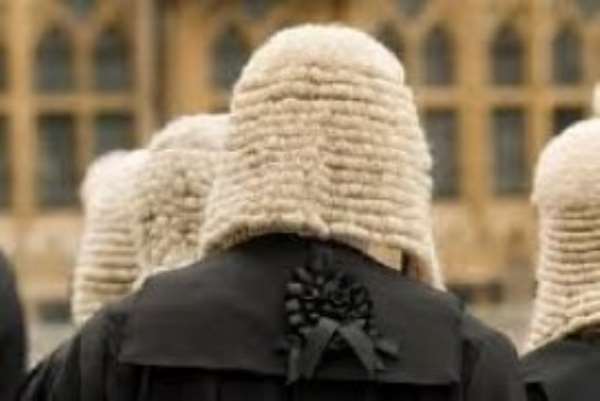 Now, so far into the case, they've accused the nine Justices of being too strong on Lawyer Addison but very soft on both Lawyers Tsikata and Lithur. They say even Justice Baffor Bonnie shouted on Lawyer Addison to keep quiet when he (Baffoe Bonnie) was talking. They attribute that to intimidation. They are therefore encouraging Lawyer Addison to be hard and tough on the Justices, thinking that, that might help them have a draw in their case. Little minds at work.

The NPP are now saying the Justices should not have allowed the pink sheets to be counted at all by KPMG. They said the pink sheets should have been counted even before the start of the case. They are also asking the court why they let KPMG use the pink sheet set in the office of Justice Atuguba as the control mechanism and not any of the other eight Justices. In other words, KPMG should have randomly picked which set they would use as the control mechanism. Again, little minds at work.

I know the list of accusations has not ended since Lawyer Addison is still cross-examining and the issue of the KPMG audit has not even come up yet. When the pink sheets are not exactly 11,842 as being told by the NPP, questions would have to be answered and the ignorant people would add to the list of accusations. Little minds would always be at work in the NPP.

Now, my question is, with all these accusations going on, would the NPP agree with the Supreme Court when the final verdict comes out and it is not in their favor? To the NPP, justice is only served when the case is in their favor and Nana Akufo-Addo is declared winner of the December 2012 elections. Anything short of that is NOT justice and they will plan series of demonstrations that would lead to the country being ungovernable. They now think elections are won by the number of demonstrations they go. Instead of the NPP planning for the 2016 or 2020 elections, they are rather planning how to make the country ungovernable. When they loose the 2016 elections, they would run to the Supreme Court and ask the Electoral Commission to tell the court which country they ordered their pink sheets from.

The NPP has already accused the other two arms of government of corruption. They've not found any against John Mahama's Presidency but because the Presidency of John Kuffour was that corrupt, they think every Presidency ought to be corrupt. The only arm of government left to be accused is the Judiciary (Supreme Court) and they should spare us that one. If the NPP don't trust and respect anybody and anything, they must know that Ghanaians do.