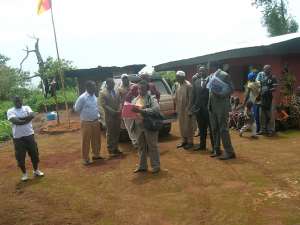 Magistrate Achu of the Court of First Instance Bamenda (CFIBA) moved his court to Mamada Estates, Wumse-Ndzah in a locus (visit to the scene of dispute) on 30 May 2013 to determine that Mbororo people were effectively occupying, farming and grazing cattle on the land. This trip is in line with the procedure in resolving the dispute between the Catholic University of Cameroon, CATUC represented by His Grace Cornelius Fontem Esua, Archbishop of the Bamenda Archdiocese, who had issued a quit notice on 2 January 2013 for the 300 Mbororo living there to leave.

The quit notice was to send away the Mbororo from where they had lived for over a century to make way for a proposed FCFA 55 billion (US 11 million) CATUC complex as from 15 January 2013. The Archbishop threatened that caterpillars will be brought in to destroy all buildings on the site.

Barrister Sama, representing Ardo Adamu Bi Mamada, in Suit No CFIBA/15CM/2013 prayed the CFIBA to restrain the CATUC represented by His Grace Cornelius Fontem Esua from destroying the buildings belonging to the Mbororo community.

The Catholic Archdiocese of Bamenda claims that it had been looking for land to build CATUC since 2007. By 2009, they determined that Mamada Hills, occupied and developed by the Mbororo since 1904 was suitable for CATUC. His Grace Cornelius Fontem Esua recounts that he approached the Chief of Ndzah who said the land was empty and the CATUC could have it after payment of the court costs for an earlier matter between Bambili and Bandzah won by Bandzah.

After paying money to Fon of Ndzah, the Archbishop claims he then approached the Senior Divisional Officer (SDO) of Mezam, Joseph Bertrand Mache Njounwet who said the Archbishop did not need the consent of the traditional chief that he should have come straight to him, as all land belongs to government.

On 12 September 2009, citing Prefectoral Order No 470/PD/E29/712/S.12 fixing dates for selection, demarcation and recommendation of Temporary Grants over parcels of National Land of the 2ndCategory by Lands Consultative Boards (LCB) of Bamenda III Sub Divisions, the D.O Bamenda III Sub Division invited the Ardo and his two notables to attend the LCB in Ndzah village on 22 November 2009.

The LCB set out to select and demarcate land in the 2nd Category. Land in the 2ndCategory, as defined by the Cameroon Land Tenure Law, means that the land is unoccupied and undeveloped.

The occupancy of Mamada Hills was recognized by Ordinance No 49 of 1933, as settled by D.C.E Tovey Esq, D.O. of Bamenda Division to settle the boundaries between Elachu (former name of Bandzah people also called Baforchu II); Mokwene (former name of Nkwen); Mbeli (Bambili) and Bamendankwe.

Cameroon Land Tenure provides that when land is in Category One, it cannot be leased to another private individual. The LCB set out to select and demarcate land in the 2nd Category and the prayer from Barrister Sama in Suit No CFIBA/15CM/2013 is to restrain the CATUC from destroying buildings belonging to the Mbororo on Mamada Hills.

The second legal argument that sustains the Mbororo determination not to leave Ardorate Mamada is that the Ardorate is a Third Class Chiefdom and by Cameroon Land Tenure Law is the Joint Public Property of the Mbororo community and cannot be alienated, attached, or expropriated for any reason, even by the State for a public utility.

As the Archbishop Cornelius Fontem Esua, representing CATUC claimed in his interview granted to L'Effort Camerounais of 17 April 2013, he insisted that the Temporal Land Concession granted to CATUC in Wumse-Ndzah was for an empty piece of land in Category 2. CFIBA had to go to the field to assess the situation for itself.

At the Mamada Hills, Magistrate Achu was able to ascertain that the land granted to CATUC in Arrete No 0009447/K.6.1/MINDAF/D1/D13 of 2 September 2011 was effectively occupied and developed by Ardo Adamu Bi Mamada and the Mbororo community.

When Magistrate Achu, turned to Barrister Nji Gideon, Counsel for CATUC and asked, 'Counsel for respondent, do you have anything to add to our findings?'

Barrister Nji Gideon, accompanied to the Locus by Cosmos Jobain in charge of construction and property at the Catholic Archdiocese of Bamenda said, 'We do not have the power of attorney so cannot say anything.'

As counsel for the CATUC and representing CATUC in Suit No CFIBA/15CM/2013, Barrister Nji Gideon has the locus standi to represent CATUC and speak during the Locus.

The CFIBA rose from its Locus slating 26 June 2013 for its judgment.

The Mbororo can start preparing their drums for celebration as the only judgment to come from an incorruptible CFIBA will be in their favour. The local administration of Bamenda headed by the Senior Divisional Officer, Joseph Bertrand Mache Njouwet, Ebune Confiance and the Land and Surveys Delegate showed criminal complicity to select and demarcate land in Category 1 instead of 2nd Category as the Prefectoral Order of 17 September 2009 stated.

The judgment from CFIBA on the 26 June 2013 will comfort the Minister of Land Tenure and State property to declare irregularities in the Temporal Land Grant by Arrete No 0009447/K.6.1/MINDAF/D1/D13 of 2 September 2011. This will result in a suspension of the CATUC activities in Wumse-Ndzah and a cancellation of the temporal Land grant.

Meanwhile, some 175 Bambili people whose houses and property was destroyed to make way for the resettlement of the Mbororo are still homeless and are calling on government to come to their rescue. The population is still at a loss to determine why the local administration of Bamenda went to Bambili to destroy property to resettle the Mbororo. No notice was given to the Bambili to quit, nor were they warned before the destruction of their property on 2 May 2013.