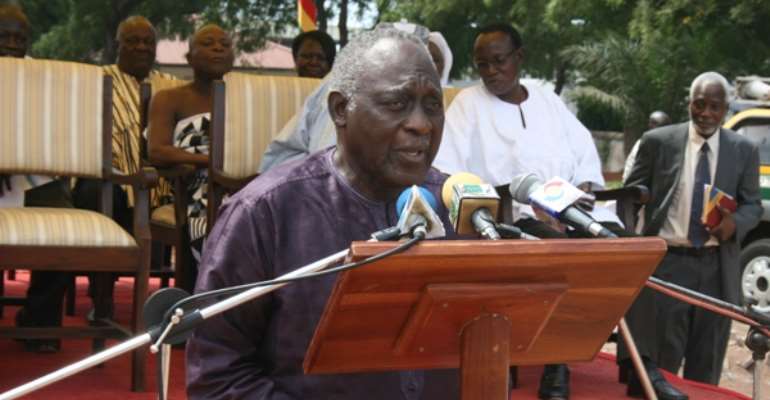 Kpandu (V/R), July 28, GNA - Professor Kofi Awoonor, Chairman of Council of State has called on students to uphold the virtues of humility, respect and love in all their endeavors.

He said intellectual achievements alone cannot make them agents of transformation in society if they lose focus on the necessary virtues to adopt.

Prof Awoonor, who was speaking at the 60th Anniversary celebration of Bishop Herman College at Kpandu, paid tribute to the late President John Evans Atta Mills for his love for God and man and urged the students to develop such attributes.

The anniversary was on the theme “BIHECO at 60-A great Catholic Institution.”

Prof Awoonor asked the students to make living a good moral live their paramount concern and not to hesitate in making sacrifices for others.

He commended the College for not recording any student disturbances or riot since the College's establishment and described such acts as foreign to the Ghanaian culture.

Mr Ford Kamel, Volta Regional Minister, in a speech read on his behalf urged management and staff of the College to continue to instill useful virtues in the students so that so that they would develop into useful adults.

He said the Region had benefitted from over 200 school infrastructure including six –unit classroom blocks, dormitories, dining halls, teachers' bungalows, and furniture.

Mr Mahama Ayariga, Deputy Minister of Education, commended the Catholic Church for its role in education and reiterated government's commitment to enhancing quality teaching and learning.

He announced that government has secured 75 million dollars for the sector and called for support from all.

He said the College was currently in a dire need of a new dining hall and a kitchen complex, staff bungalows and a sports complex.

Master Mensah Emmanuel Calvin, Senior Prefect of the College, appealed to government to provide a bus to the College in view of its high student's population.

Galamsey fight: Four Chinese nationals to be deported
39 minutes ago

Gov't must opt out of Sputnik-V vaccine procurement contract...
39 minutes ago