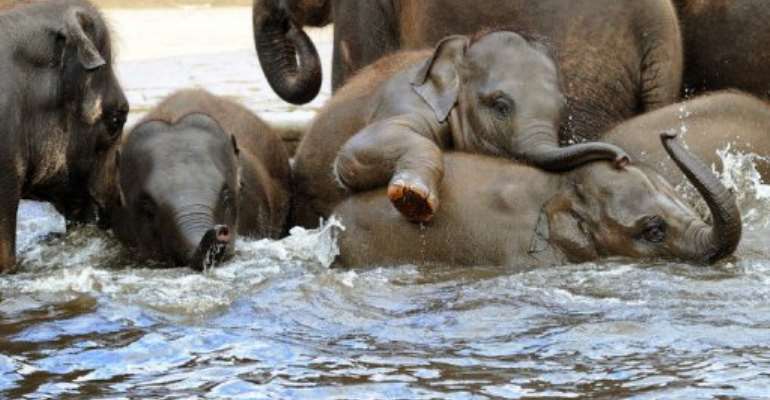 Asian elephants take a bath in a pool at the zoo in Germany. By Holger Hollemann (AFP/DPA/File)

WINDHOEK (AFP) - Namibia slammed reports Friday that it had exported nine orphaned elephants to Mexico, angrily denying the claims that sparked outrage in a nation proud of its conservation record.

Mexican businessman Frank Camacho said Tuesday his wildlife reserve had brought the young animals to Mexico after their parents were shot dead by hunters in Namibia.

"There have been inaccurate local and international media reports labelling the nine elephants exported to Mexico as orphans as a result of hunting and poaching," she told journalists in the capital Windhoek.

"In no way can this export be considered as a 'rescue' mission, nor were these elephants orphans ... and not at risk of being destroyed by this ministry."

Camacho said his Africam Safari -- which maintains a nature reserve in central Mexico with some 300 species -- was contacted by the owner of a reserve in Namibia who said he did not have space to raise the animals.

But Nandi-Ndaitwahthe refuted this with official records.

"These elephants come from the (private game) farm Eden in northeastern Namibia and the founding stock of these animals were bought by the previous farm owner from South Africa's Kruger National Park and from Namibia's Etosha National Park in the 1980s," she said.

"There has never been any report of elephant poaching on Farm Eden."

The farm had sold the animals to an intermediary and transported to a temporary holding facility until their export was authorised last month, she said.

No poaching incidents have been reported in Namibia for several years. The exact number of its thousands of elephants is uncertain because the animals roam freely in nature reserves that cross into neighbouring countries Botswana, Angola, and Zambia.

Modern Ghana Quote Reports
Catch up with all the political quotes from our politicians.
Sponsored
More Africa
Modern Ghana Links
UK bids farewell to lockdown hero as US backs huge rescue plan
US set to approve third vaccine, but fears grow for poorer nations
Hunger drives displaced Mozambicans to risk going home for food
RFI strongly condemns the burning of the home of its Niamey correspondent, Moussa Kaka
Mitigating the COVID-19 Impact: Six Media Organisations in West Africa Supported to Improve Online Presence, Revenue Generation
UN forum unveils the wonders of artificial intelligence and other STIs for Africa
ARFSD side event focuses on how Africa can manufacture to meet its own pharmaceutical needs
Niger opposition figure accused in unrest turns himself in
Experts call for stronger partnerships for the free movement of people in Africa
Quote Reports Dossiers
TOP STORIES

Manual on COVID-19 vaccination being developed for public se...
34 minutes ago