Is Herman Cain The Next Game Changing Political Force? 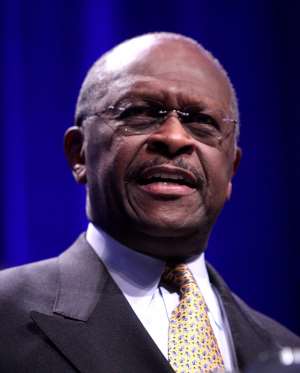 All of his former rivals now unite behind the GOP's presumptive nominee, Gov. Mitt Romney. Conservatives and most libertarians are joining together in opposition to the now softly (and, one hopes, temporarily) despotic Democratic Party. Herman Cain, in this process, may prove to be the one with the biggest impact on the presidential election, the contest to hold the House, gain the Senate majority, and the future direction of the GOP.

The other former presidential rivals will help unite the Republican base. Cain is positioned to unite and also to excite that base, and, of at least as great importance, to grow it. Yes, Cain is a unifying factor. He comes from the business class, appeals aggressively to Tea Party constitutional purists, presents a pure Supply Side job-creation message of lowering marginal tax rates plus a rule-based monetary policy, and he champions the most potent issues of social conservatives (whether Republican or Democratic): traditional marriage and pro-Life.

More importantly, Cain is exciting. Exciting and mobilizing the base is critical to a Romney victory. Cain mobilizes. In addition Cain is, perhaps uniquely, positioned to take the contest right to the Democratic voters in the nine crucial swing states. Rasmussen's polling shows that labor union members (including this columnist, a card-carrying member of the AFL-CIO) and blacks both are highly supportive of the gold standard, an issue which Cain now unequivocally champions. Cain reportedly draws enthusiastic receptions on college campuses. Cain's own polling reportedly shows that 62% of Latinos are enthusiastic about his 9-9-9 plan.

Cain was inspired to join the Republican Party by the last great Republican official to demonstrate true and consistent passion for the dignity of nonwhite Americans, Jack Kemp. Kemp mostly is remembered for his championship of marginal tax rate cuts. These, plus monetary integrity, jet-propelled the economic growth of the Reagan-Clinton era. Yet Kemp described himself as “a bleeding heart conservative.” When he left government service (after serving as President George H. W. Bush's secretary of Housing and Urban Development) the only political purposes for which he reliably could be dragged out of retirement were any calls to advance the economic and political power of marginalized ethnic groups, especially Blacks.

Developing an ear for the concerns outside of the traditional GOP base is essential to the GOP's future. The charming and optimistic Cain could prove a great agent for an overdue renewed championship of equality of opportunity within, as well as a persuasive envoy of, the GOP. A serious focus on equality of opportunity can exile anything like “DWB” beyond the Pale, rebooting the GOP's reputation inside urban enclaves.

Kemp's death left a vacuum. Now Kemp's mantle has fallen, at least provisionally, upon Herman Cain's shoulders. Cain rises to it. Kemp, for example, was the last modern political champion of the gold standard. In 9-9-9 An Army of Davids, coauthored with his senior economic advisor Rich Lowrie, Cain devotes over a quarter of the book to passionate advocacy of the gold standard. [Disclosure: the book references this columnist's work in Forbes.com and, in its end notes, some other writings and the work of several other Forbes.com columnists such as Charles Kadlec and Brian Domitrovic.] Cain's proposed mechanisms for the restoration of the gold standard are in many, although not all respects, strongly reminiscent of the work of Kemp's ally Lewis E. Lehrman (whose Institute this writer professionally advises) as set forth, in The True Gold Standard as well as in many editorial features by Lehrman.

Of even greater interest than the technicalities, and even the economics, of Cain's gold standard are the politics. Cain writes in the Wall Street Journal “I realize the Washington establishment goes ballistic at this suggestion. Gold is kryptonite to big-spending politicians. It is to the moochers and looters in government what sunlight and garlic are to vampires. The American people are another story. Nearly half (44%) support a return to a gold standard, according to an October 2011 Rasmussen Report. That support soars to 57% when respondents know it will 'dramatically reduce the powers of bankers and the political class to steer the economy.'”

Phrases like “Gold is kryptonite to big-spending politicians” are red meat to self-identified Tea Partiers, 70% of whom, reports Rasmussen, support gold. TeamRomney is looking to unite and excite the conservative, Tea Party, and Libertarian base to ensure a big turnout on Election Day. This columnist has shared Tea Party podiums with Cain and watched him electrify audiences.

There are a limited number of issues where the Republican Party can, authentically, represent itself as better aligned with Democratic rank-and-file sentiment than can the Democratic leadership. Economic growth is one of these, and monetary policy — good money — a crucial component of that. Although Gov. Romney has not endorsed the gold standard, as Cain notes, he “has said on record he is 'happy to look at a whole range of ideas on how to have greater stability in our currency and in our monetary policy.' His leading economic adviser, R. Glenn Hubbard, has devoted much of his recent book, 'Seeds of Destruction,' to rules-based monetary reform.” Team Romney's economic platform is broad enough comfortably to accommodate Cain's views — and the votes they can draw.

Cain is a charismatic spokesman. He stands for policies of free-market driven economic growth, very much including a Tea Party electrifying and Democratic-base-voter-pleasing call for gold. Add in Cain's recent critique of President Obama's apparently opportunistic embrace of gay marriage. Together, perhaps uniquely, these position Cain to take the fight right into the urban enclaves that have long stood as sacrosanct Democratic turf. In many of the swing states Cain's message could generate swings of several points into the GOP column. That could be the margin of a Romney victory.

In the long run Cain's greatest impact might be the repositioning of the GOP to grow its base through championship of economic growth, genuinely equal opportunity, and traditional values. Cain, more authentically than most Republicans, can take the fight right into the Democrats' base and win a share of these voters back to the Party of Lincoln. “The best defense is a good offense,” said Jack Dempsey. Herman Cain, unleashed, championing prosperity through the free market mechanisms of low tax rates and gold, coupled with equal opportunity and traditional values, could emerge as the game changer nobody quite saw coming.