Legitimisation Of Terrorism, Tribalism And Lies Under President Mills (3) 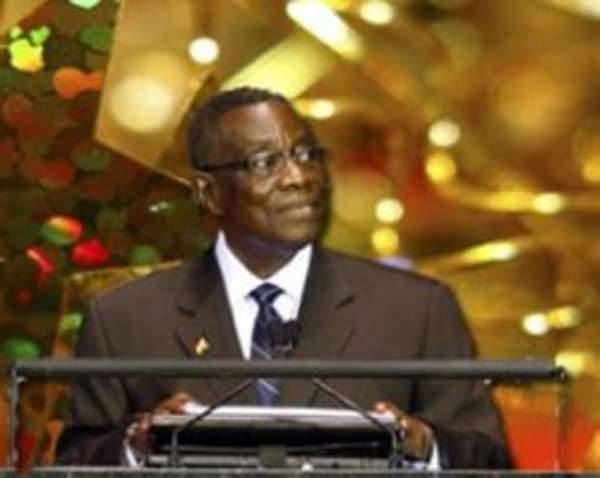 'Action and reaction are equal and opposite,' Newton's Third Law of Motion.

'If they come for your brother in the morning and you don't speak up, they will come for you in the evening,' Malcolm X.

Today, this country is clearly in a state of decay. I have just returned from Kumasi and was shocked to discover that the once Garden City has today turned into Garbage City. I presume Kumasi today presents a replica of what is happing to the entire country because of poor incompetent leadership entrusted to greedy bastards. The roads in Kumasi are choked, with vehicles moving at snail pace on the narrow roads with no proper connecting interchanges and access roads. Empty spaces have all been taken over with the connivance of the 'city' authorities and are being developed into departmental stores. Even the famous Kejetia lorry park will soon disappear as the place has not escaped the greed of the city authorities in allocating it for the construction of stores. The little space left at the lorry park and all pavements in the city shave been taken over by traders.  School compounds are also being used for the construction of stores. Water bodies, including the catchment areas of the main source of water supply to the city, have been sold out to estate and private developers who are seriously destroying the environment and thus threatening the water supply system of the entire community.

There are no provisions for car parking lots at the commercial areas. As such the city authorities gleefully charge shop owners on daily basis for parking their cars on the streets. This act deprives casual visitors, customers and ordinarily non-residents a suitable place to park their cars temporarily while at the same time causing serious congestion for other moving vehicles as the roads have been  narrowed to single lanes.  Buying and selling appear to be the mad motive and occupation of the people. Other available empty spaces are filled with mountain heaps of rubbish and uncollected garbage. All those who have the power of attorney over the Kumasi metropolis should bow their heads in shame for the deplorable conditions the city finds itself. The present state of Kumasi clearly reflects the unacceptable deplorable state of the nation in every field of human endeavour and points to the fact the future generation does not matter to the nation's leaders.

The national leadership should wake up to its responsibilities. The leadership should wake up to the needless death from cholera  of the citizens and of kids dying from malaria because of lack of treated mosquito nets and the callous state of pregnant women dying from childbirth. Our hospitals lack basic equipment and drugs. The national Health Insurance Scheme has collapsed and cash and carry is back with vengeance. Majority of the people do not have pipe borne water while most of the citizens suffer from infrequent power supply. The country lacks good roads. Pupils study under trees, lying on their stomachs to take lessons from ill-motivated teachers without books to work with. Our towns and urban areas are chocked with uncollected filth. There is gross despondency on the faces of virtually all the citizens of the country except those who are enjoying the largess of the NDC.

The economy is in a very terrible shape behaving like a limping man with the cedi in an acrobatic free fall. Interest rates are too high for any genuine businessman. The current level of unemployment has never been experienced in the history of this nation before. And yet the voodoo economists and statisticians who are at the helm of affairs of the nation keep on dishing out yo-yo figures which will make great economists Paul Anthony Samuelson develop goose pimples. The needles deaths resulting from this economic and political malaise are unacceptable. All these needless deaths and myriad of problems facing this country could have been avoided had billions of cedis not illegally and corruptibly been siphoned to finance the political ambition of the clearly failed corrupt and incompetent President Mills's NDC political administration, Woyomegate fashion.

In the midst of all these, President Mills's NDC administration could dream, design, formulate plan, implement, supervise a diabolical plan to steal the nation's money and pay it out as judgment debt where no contract existed. The Yamoransa-Anwiankwanrta road was constructed by a South Korean company, Daewoo, with funds from the Japanese government. Yet President Mill's NDC administration authorized the payment of non-existing judgment debt to CP for the same project at a time when CP was owing in taxes  millions of cedis in far excess to what CP was illegally claiming. Alfred Woyome has accepted in open forum that he did not have any contract with the state and yet he was paid a whopping amount of 52 million Ghana cedis which presumably was distributed to the top hierarchy of the NDC. President Mills's Finance Minister has categorically stated that the then Attorney-General and Minister of Justice under President Mills should be held responsible for the Woyome criminal act. Yet nothing has happened to her.

Woyomegate keeps limping on with no appetite on the part of President Mills's NDC administration to bring it to a lawful conclusion, leading to the recovery of the money illegally paid out. And yet the Mills-Mahama NDC administration has instituted a legal action of genocide, terrorism, and treason and hate speech against the person who blew the whistle on the Woyomegate scandal in order to smash him with a bulldozer.  Who qualifies to be charged with genocide, treason terrorism and hate speech?  Who is best qualified to be crushed with a bulldozer? Should it be the people who steal food from the mouth of the poor or the person who uses his mouth to point out the ills of the society? Judgment, thou hath to brutish beast and men have lost their sense of reasoning. Indeed, a fool has said in his heart, there is no God. Why are all the people condemning Kennedy Ohene Agyapong not boldly and emphatically calling on President Mills to refund the judgment debt illegally paid to Alfred Woyome and others with the same emphasis at their disposal, as they are using in castigating Kennedy Ohene Agyapong?

This African continent and this country Ghana for that matter have lost the way to salvation, growth and development. Africa can never lift itself from the current poor undeveloped state to the level of first class developed country like Singapore and Malaysia if we continue with the present corrupt and incompetent failed leadership. Africa and for that matter Ghana have produced educated leaders in every field of human endeavour and at every level of the human society who have proved beyond all reasonable that the education they have had has never succeeded in muddling them for leadership position.  The educated blackman in leadership position does not have the required intellect, the right level of IQ and the requisite thinking power to make informed choice devoid of personal greed. The educated blackman in leadership position does not have the intelligence to distinguish between need, want and greed. The higher the formal education the blackman acquires, the less intelligent he becomes and the more his ability to make rational and discerning decisions to enable him govern himself diminishes. How can a minister of state with the best legal educational background authorize the illegal payment of judgment debt to the foreign company running into millions of Ghana cedis?

How can a highly educated university professor of law occupying the illustrious combined position of Head of State, Head of Government and Commander-in-Chief of the nation's Armed Forces preside unconcerned and uncaring over such unprecedented gargantuan crime in the criminal realm of high treason, terrorism and genocide? It is complete madness. How can the educated people condemn Kennedy Ohene Agyapong and allow the beastly and jungle behavior of an uncaring regime to go scot free or to treat that regime with kid gloves? It is time to question the IQ of all the people we have been put in leadership position at all levels of the society and measure their independence of mind.