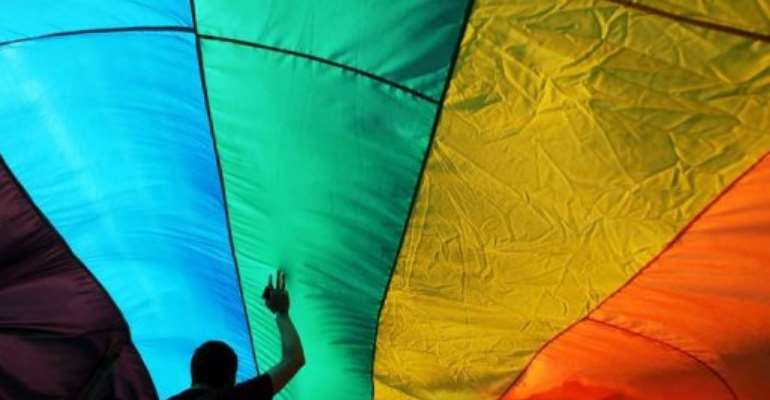 A demonstrator holds the rainbow flag during a Gay Pride parade. By Nikolay Doychinov (AFP/File)

The leaders, who advise the government on traditional laws and customs among ethnic groups such as the Zulu and Xhosa, made the request in reply to the annual invitation to submit suggestions to parliament's constitutional review committee, City Press reported.

South Africa is the only African country to allow gay marriage and adoption.

Its constitution, adopted after the fall of apartheid in 1994, reads: "The state may not unfairly discriminate directly or indirectly against anyone on one or more grounds, including... sexual orientation."

ANC lawmaker Patekile Holomisa, who chairs the constitutional review committee and is also a traditional leader, said ANC leaders had imposed equal rights for gays on party members and the country.

"The great majority does not want to give promotion and protection to these things," he told City Press.

"The last time this issue was discussed was about same-sex marriages. Most of the people in the (parliamentary) caucus were opposed to it, but then Luthuli House (ANC headquarters) and the leadership instructed us to vote for it."

Holomisa, who said he fears the ruling party will lose votes if it ignores the traditional values of its electoral base, called homosexuality "a condition that occurred when certain rituals have not been performed".

The ANC quickly distanced itself from Holomisa's remarks, releasing a statement that said the ruling party's chief whip in parliament would call a meeting with him "for clarity regarding his media statements".

"The ANC caucus distances itself from these views and would like it noted that at no stage has it considered debating this issue before parliament," it said.

"The ANC believes that any law which denies people the right to their sexual expression devalues them in our broader society and as such is an affront to their dignity and a breach of... our constitution."

Despite South Africa's liberal constitution, homosexuals still face discrimination, harassment and violence, especially in black townships, where lesbians are commonly targeted for "corrective rape" in the belief that sex with a man can change their sexual orientation.