Ghanaians must live in peace and in unity -Akufo-Addo 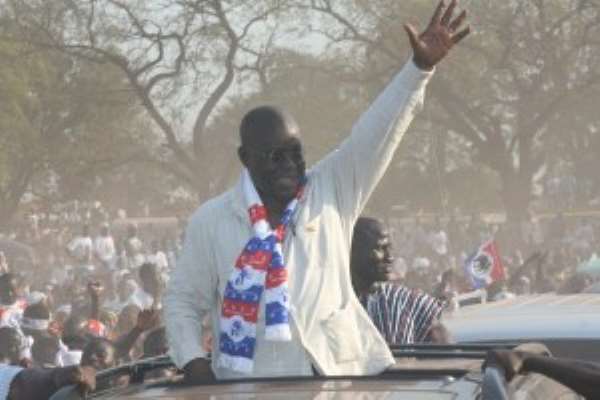 Ho, May 05, GNA - The Presidential candidate of the New Patriotic Party (NPP) Nana Addo Dankwa Akufo-Addo, Friday said Ghanaians “should never allow the richness of our differences to become a currency of spite and hate.”

“We must be proud to celebrate our differences and even share the occasional harmless jokes about where we come from.”

Nana Akufo-Addo was addressing the second General Meeting of the Volta Region House of Chiefs with traditional Queens in attendance.

“I do not have any ethnic agenda to promote, and I will not condone any such agenda”, he assured the Chiefs and Queens of the Volta region.

He said Ghana's success stories, especially since the beginning of the Fourth Republic, must not be compromised by “inflamed passions, tribally charged language and selective use of state power.”

“A strong Ghana must be based on the strength of its entire people. This is my profound conviction which will always guide my conduct', Nana Akufo-Addo stated.

He observed that Ghanaians are united by common hopes and aspirations and want to move in the same direction of a brighter future for present and future generations despite having diverse ethnic backgrounds.

Nana Akufo-Addo said he is “unequivocally committed to peace in our country” that was why even though he lost the 2008 Presidential election by “the smallest margin” in the history of Ghana and Africa he neither contested the results nor incited his supporters “thereby avoiding the spilling of even a single drop of Ghanaian blood.”

“My resolve remains the same today”, he assured.
Nana Akufo-Addo said the application of rule of law to the letter without discrimination is necessary, to overcome the anxieties and fears being associated with the 2012 elections.

“The rule of law is the glue that binds a free society together in peace and harmony,” he said.

In a Press statement, the Volta Region House of Chiefs said among others that “we want to place on record our appreciation of existing bonds of friendship between various Ewe and Ashanti chiefs and traditional areas.

“We want to also express our belief in the ability of the various security agencies to deal appropriately with individuals and groups who would want to disturb the peace that has become the distinguishing development of our entire nation.”

The statement urged the people of the Volta region to remain calm and treat Mr Kennedy Agyapong's “effusions” with contempt and as insignificant.

“We therefore would like to call on all Ghanaians to receive with skepticism politics that play on the forces that divide us, that play on our sentiments, make us uncomfortable and instead begin to welcome endeavours that seek alliances within our nation”, the statement said.