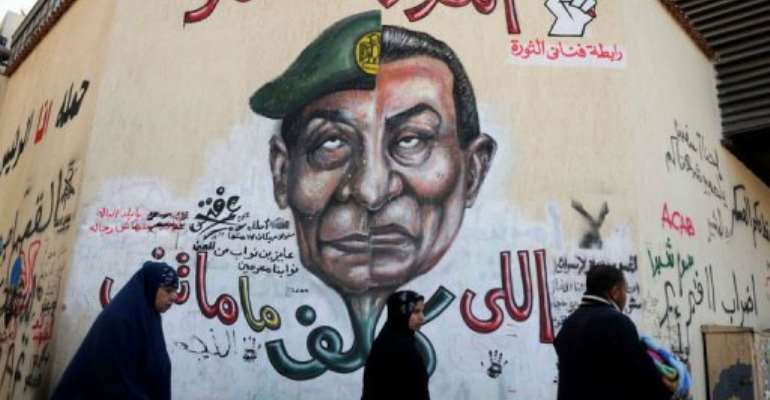 Egyptians walk past graffiti with a slogan reading, "The revolution continues" in Tahrir Square. By Mohammed Hossam (AFP/File)

CAIRO (AFP) - They were hit, pushed back and even fired at, but Egyptian activists have returned to the scene of deadly clashes in the heart of Cairo, determined to keep their revolution alive, this time armed with paint brushes.

From a distance, Sheikh Rihan street, a wide avenue in Cairo's usually busy administrative centre, looks eerily still. Not a car, not a moving soul.

But get closer, and a trompe l'oeil becomes apparent.

On the surface of a concrete wall built by security forces in the middle of the road, artists have painted a street scene recreating Sheikh Rihan with all its lamposts, pavements and trees, in a bid to melt away the barricades as part of their "No Walls" campaign.

Even after a popular uprising ousted veteran president Hosni Mubarak last year, activists have continued taking to the streets to push for the goals of their revolution -- freedom, political transparency and social justice -- which they say remain unfulfilled.

In November and December, fierce clashes between protesters and security forces in Cairo's administrative centre prompted authorities to erect a series of concrete walls to protect vital buildings, they said.

But protesters believe the walls were built to cage them in and prevent the spread of further protests.

"We didn't have a revolution so that in the end, they build walls to separate us from them and them from us," said Ammar Abu Bakr, a lecturer at the Fine Arts School in the historic city of Luxor, in southern Egypt.

"We have launched a non-violent campaign, simply by opening up the walls through drawing," Abu Bakr told AFP.

The once drab walls of downtown Cairo have turned into a giant graphic newspaper, recounting current events through an explosion of colour and form.

Caricatures of the ruling generals, portraits of protesters who died in clashes, scenes depicting street battles have turned the centre of the capital into an open air art gallery.

"Since our revolution is peaceful, if they play with walls, we will play with the mind. They put up a wall but we don't see it," said Amr Nazeer, a graffiti artist who participated in the No Walls campaign.

In a cat and mouse game with the authorities, the artists work fast to get exposure for their work before it is removed.

"It's an exhibition for the people, you express yourself and at most in a few days or a week it will be removed, then you paint again," Nazeer said.

"The message is always parallel to the events. When something happens or when there's an event, the revolutionaries come first and then we step in," said Abu Bakr, of the growing artists' movement defying authorities through chalk, paint, spray and stencils.

A ballerina on points, women in traditional robes carrying gas cylinders on their heads, wolves, spears, snakes with human heads, rainbows and balloons are just some of the images depicted in the murals that have covered the grey concrete walls.

"Authorities don't accept graffiti movements, not just in Egypt but all over the world... But we are trying to introduce a new style and propose new subjects," said Alaa Awad, another lecturer at the Luxor Fine Arts School.

Awad painted his own interpretation of a page from the Description de l'Egypte -- a rare copy of a book written by French scholars who accompanied Napoleon on his expedition to Egypt -- which was burned when the building housing it was set ablaze during clashes in December.

Authorities blamed protesters for starting the fire, saying they had deliberately destroyed precious Egyptian heritage, while the protesters insist they were the ones rushing to the scene to salvage what remained of the documents.

State media "tried to show that the revolutionaries were behind the destruction," Awad told AFP.

"My message is, there is no such thing as the Description of Egypt. Egypt needs to be described by its people," he said, standing in front of his blue and sand-coloured mural, which bears the slogan: "May we see the light of day."

A few weeks after it was completed, the enormous concrete blocks that provided the canvas for Awad's painting started coming down.

On Friday, dozens of angry anti-military activists, using a variety of creative mechanisms including ropes and levers, tore down the wall, on a main street leading to parliament near the protest hub of Tahrir Square.

After Mubarak was toppled in 2011, the military council of elderly generals who took power was idolised for not siding with the fallen dictator, but has since come under attack for cracking down on dissidents.

Back in central Cairo, the face of Samira Ibrahim, the woman who created a storm by taking the military to court over forced "virginity tests" of female protesters, features prominently.

On one wall, her face looks up defiantly above soldiers, all bearing the face of the army doctor who performed the virginity tests and who was recently acquitted.

Nearby, a series of portraits of the victims who died during clashes -- with bright orange wings -- cover one large wall.

Abu Bakr said he gave them wings because in Coptic Art -- his area of expertise -- "wings are related to martyrs, saints and angels."

The art has attracted many to the city centre, snapping pictures and posing in front of the graffiti.

"I pass by this street and I recognise the martyrs, yes, they sacrificed their lives. But as the graffiti says, they have now become angels," said Gamal al-Sayyed, an IT consultant.

CEO Of Travel Bureau Limited In Court For Stealing, Forging ...
21 minutes ago