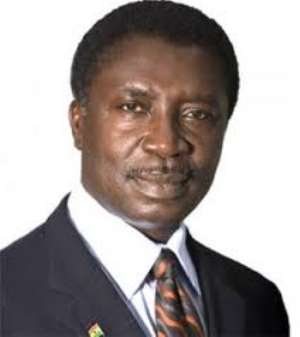 Many in Ghana affectionately call him Ghana's “heartman” in apparent bemusement for what he does for a living – opening up the torso of those with ailing hearts and fixing them. He is Professor Kwabena Frimpong-Boateng, whose extraordinary service to country, continent, and fellowmen has caught the attention of African students studying at Ohio University who voted him for the 2012 edition of the coveted African Heroes award.

Professor Frimpong-Boateng's extraordinary expedition to distinction began at the University of Ghana Medical School, where he obtained the MB (Bachelor of Medicine) and ChB (Bachelor of Surgery) degrees, emerging at the top of his class and also winning the Easmon Prize for being the best student in surgery. He served as a House Officer or intern at the Korle-Bu Teaching Hospital, Ghana's foremost teaching and referral hospital before moving to the Komfo Anokye Teaching Hospital in Ghana's Garden City, Kumasi, as a medical officer.

Professor Frimpong-Boateng, like many of his contemporaries who sought specialization in the medical field, had to migrate to Europe for lack of facilities for specialization back home. He headed to Boppard in Germany, where he studied at Medizinische Hochschule Hannover (Hannover Medical High School) and specialized in cardiothoracic surgery from 1978 to 1988. He is a qualified Cardiothoracic and Vascular surgeon and a consultant. He was one of the pioneers of the heart transplantation program in Hannover, where he also taught both undergraduate and postgraduate Thorax, Cardiothoracic and Vascular surgery.

In spite of the lure of economic security and luxury offered by the industrialized nations to professionals of his caliber, Professor Frimpong-Boateng decided to return home after a few years' at the Hannover Medical High School. For many of his compatriots and many other professionals from developing countries, these are not opportunities to be deliberated. They are simply an escape from economic and professional frustrations back home.

He returned to Ghana with a blueprint to open the Cardiothoracic Center, the first of its kind in a region where such facilities are to be sought in Europe, America, or South Africa by its elites. Like many other innovators, his journey has not been a smooth one to paradise. He has had a fair share of the frustrations and the disappointments that has forced many Africans to return to countries of their training after failing to find their feet in their own countries after their return.

This success story cannot be told without the mention of Ghana's former president, Jerry John Rawlings, who took personal interest in his project and opened an office at the seat of government, where activities involving the establishment of the center were coordinated from. Indeed, political leadership can make a huge difference in the equation sometimes.

Professor Frimpong-Boateng has trained myriads of students from Ghana, Nigeria, South Africa, Kenya and across the African continent and can rightly been seen to have affected many lives on the continent and beyond. He is also the founder of the Ghana Heart Foundation, a charity that offers financial support to offset the cost of surgery for the poor who are unable to afford the procedure at the center he helped founded. He is a member of the Ghana Academy of Arts and Sciences and has won many awards, including the Millennium Excellence Award in Ghana.

In 2006, he contested the New Patriotic Party's (NPP's) presidential slot in the hope of representing his party in Ghana's 2008 presidential elections but lost. Understandably, he must have appreciated the things that ail his country, poor leadership, like a sick heart, from his surgical lens, hoping he could be given the nod to represent his party and country in order to place his country under his surgical knife to correct its heartbeat. But politics can be more complex than the human heartbeat.

Those who made it to the award list were two of his compatriots, former Chief Executive Officer of the Commonwealth Telecommunication Organization (CTO) and an alumnus of the Center for International Studies, Ohio University, Dr. Ekwow Spio-Garbrah, and the poet extraordinaire, Professor Kofi Anyidoho. The others were Professor Eustace Palmer, a Sierra-Leonean literary giant, Dr. Wanjiru Kamau, Christened by the Obama administration as “a champion of change,” and finalist for 2011 CNN's Hero, Derreck Kayongo.

Past recipient of this award were Dr. Philista Onyango from Kenya, a board member of UNICEF and Professor Steve Howard, the Director of the African Studies program in OU. These are individuals who have demonstrated enduring commitments to the African continent in myriad ways.

Professor Kwabena Frimpong-Boateng, we welcome you to Athens, Ohio, with great pleasure. Your shining example should inspire others to also put their skills at the service of mother Africa. The African Students Union, Ohio University, says Ayeekoo to you!!!