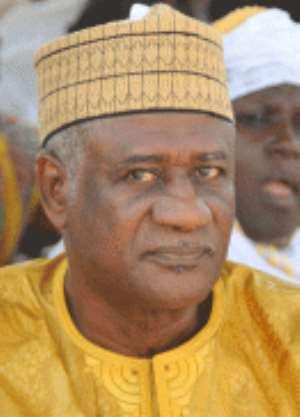 Two eminent members of the People’s National Convention (PNC) party, Professor George Abanga and Col. Zanlerigu, have been assigned by the National Executive Council (NEC) of the party, to meet with Dr Somtim Tobigah to iron out any differences that exist between him and other members of the national executive.

The delegation is expected to report back to the NEC, the outcome of their interaction and the way forward.

Following a suit filed by Dr Tobigah and others at an Accra High Court, the national congress of the PNC which was scheduled for tomorrow at the Sunyani Polytechnic in the Brong Ahafo Region, had to be postponed to December 9 to 11, 2011, after an emergency meeting of the NEC, which took the decision in Accra on Tuesday.

If hopefully the eminent members are able to resolve the matter with Dr Tobigah, then he would have to withdraw the case from the court. However, the legal team of the PNC, led by Raymond Atugubah went to the court on Monday November 28, 2011, to battle the case.

The Brong Ahafo Regional Secretary of PNC, Mr Bauh G. Inusah, who briefed the Daily Graphic on the new development in the party, explained that, at the NEC meeting, there was a sharp division among the members as to whether Dr Tobigah should be expelled from the party or suspended because of his decision to drag the PNC to court.

However, he said, the members finally decided that the two-member delegation was to resolve any differences that existed between Dr Tobigah and some leading members of the party, including Dr Edward Mahama, the flag bearer of the PNC in the 2008 elections, Mr Bernard Mornah, the General Secretary of the Party and Alhaji Ahmed Rahmadan, the National Chairman of PNC.

Mr Inusah explained that, those who wanted the expulsion or suspension of Dr Tobigah had argued that the party’s constitution did not allow any member of the PNC to send the party to court for the settlement of any matter.

According to the Regional Secretary, there were laid down procedures for any aggrieved member to follow rather than rushing to the court for redress.

First of all, he said, anyone who felt cheated or offended by any member or a group within the party, the so-called aggrieved person or persons should petition the party’s council of elders and also if he or she did not obtain a favourable response, the next person to direct his or her petition to was the leader of the party.

Mr Inusah further explained that if the concerned member or members were still dissatisfied, then the last resort was the national congress of the party to hear the case but not the court, saying that, in the current case, Dr Tobigah and his group did not follow the right procedure.

He pointed out, therefore that, the penalty for people who took the party to court was either expulsion or suspension, depending on the matter at stake, adding, ‘‘The court is for people to solve their cases but with the constitution of our party the court is not the place to settle differences’’.

The PNC Regional Secretary again indicated that the decision to postpone the national congress was primarily owing to the fact that only five regions had conducted their regional congresses and explained that per the party’s constitution, two-thirds of the constituencies ought to have had their congresses and elected their executives.

At the moment, Mr Inusah further pointed out that with the remaining five regions they had been able to complete more than half of their constituency elections while the rest were expected to finish off by December 2, 2011, to pave the way for the national congress now rescheduled for December 9 to 11, 2011.

He noted that, the general atmosphere at the NEC meeting was calm and members as well as ex-officio members had the opportunity to contribute meaningfully to the discussions on the table