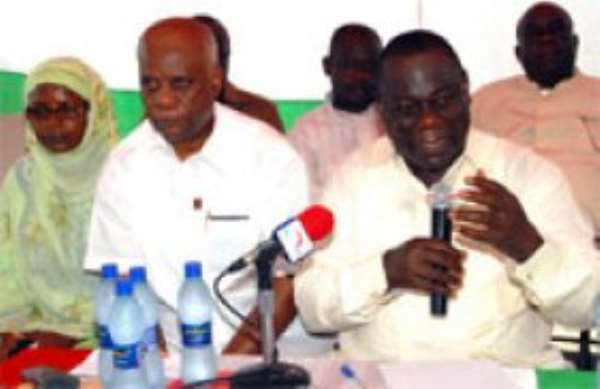 The Convention People’s Party (CPP) has promised to decentralise the police administration to the regional and districts levels for effective and swift protection of life and property, if Ghanaians vote for it in 2012.

The move which is in line with its policy of devolution of governance to the local level, will assist in abolishing the idea of a national police service headed by a central Inspector General of Police (IGP).

Presenting the party’s position in its weekly news conference dubbed “How the CPP Will Do It”, the CPP’s Shadow Member for the Interior, Mr George Oposika Aggudey, said the decentralisation process would make the police service accountable to local communities and also empower it to deal with peculiar local needs.

Mr Aggudey explained that the CPP would also establish a national fund similar to the GETFund, probably a Security fund, to mobilise resources to cater for all the laudable proposals it had made about the security.

He said in countries where security to life and property had been well managed, there was no position like the IGP but a number of commissioners of Police were appointed to oversee the activities of the various regions making up the country.

That, he said, had resulted in taking quick decisions to avoid what would have been bloody situations in several cases. He cited the assassination of the Ya Na and others in the Northern Region as well as other criminal cases in other parts of the country which occurred due to insecurity as the basis for the suggestions.

According to Mr Aggudey, the CPP perceived the segregation of the police personnel in barracks as a neo-colonialist idea and that the modern strategy was to have police personnel well remunerated and living within the local communities with the people.

With that, he said, they would be familiar with people and be responsive to their needs rapidly with a deep knowledge of facts on the ground.

He expressed the party’s displeasure about alleged politicisation of the recruitment of the security personnel at all levels and pledged that a CPP government would introduce a recruitment policy solely based on merit and demonstrated ability.

Mr Aggudey said the recruitment of security personnel would also be decentralised to the district level so that adequate background checks could be carried out on such recruits in their respective electoral areas, adding that this was to ensure that only people with sound conduct and character were recruited into the various security agencies, especially the police.

He said the course content for the police would be thoroughly reviewed to reflect modern policing and the demands of the contemporary society.

He said irrespective of the training of the police, if they were not well equipped it would come to naught and said the CPP would provide the police with modern equipment including vehicles, walkie-talkies for intelligence gathering and crowd controlling.

Mr Aggudey added that a CPP government would thoroughly overhaul the Ghana Immigration Service to make it capable of combating the growing threats of cross border and cyber crimes as well as terrorism.

He said, the CPP would revive the state of the art immigration facilities started during the Acheampong regime. It would, with a sense of urgency and through negotiation, revive the joint Ghana-Togo border posts to facilitate the movement of goods and people in line with the CPP’s principle of Pan Africanism.

He said the CPP would provide the Ghana National Fire Service with adequate resources and empower it to enforce building codes to ensure that all construction conform to set standards.

To confront the increasing threat of narcotics in the country, the CPP will work to rid the security and related agencies of corrupt officials, implement existing recommendations for reforms and then launch an anti-narcotics policy based on interception, prosecution, treatment and education.