Why Would President Mills and His NDC Fly Kufuor’s Jet Falcon 900, If They Don’t Want to Sit in the Jubilee House? 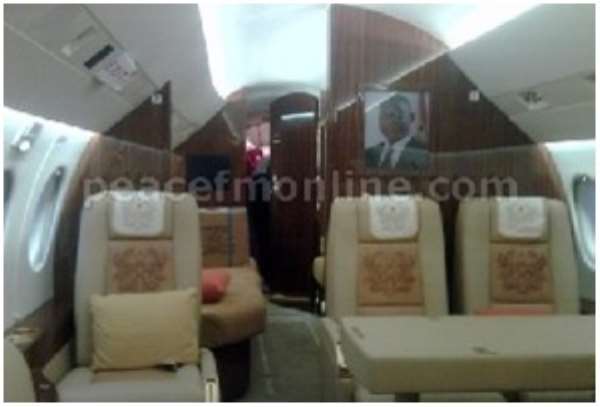 President Mills and his entourage can now fly the new presidential jet, the Falcon 900 for both national and international duties. The new jet was commissioned in Accra this morning by Vice-President, John DramaniMahama.

He said the aircraft will improve the capacity of the Ghana Airforce to transport government officials in safety and dignity. Touching on the necessity for the jet, the Vice-President said, “the existing executive jet, the Fokker 28, was acquired some 35 years ago and has served us faithfully and reliably over the years. Unfortunately it is now no longer safe for long haul flights. The falcon will therefore, from today, become the prime equipment that the Air Force utilizes to transport the president and other senior state officials on national and international assignments.”

You see now! President Mills is now saying the old Jet, the Fokker28; “the flying coffin” was too old for 35 years. But when they were sitting on the bench (NDC) in opposition they made “wide mouths” making facetious opposes to the acquisition of the Falcon by Kufuor.

What can I say? “If the butcher knew he was going to choose the head of antelope, he would have cut it completely with its neck”

Now! Why would the President Mills and his NDC annihilators, who almost objected everything from the NPP government of Kufuor and therefore refused to move to the Jubilee which was also built by Kufuor(NPP) now like to use the Falcon900 which was equally purchased by the same Kufuor who built the Jubilee house?

AsieduNketia even said Kufuor was electing the Jubilee house his him and his family and Ghanaian people needed the money for the Falcon so badly that Kufuor should have use that money wisely for Ghanaians.

As i am writing now Ghanaian school kids baldy need classrooms but President Mills has borrowed containers full of Dollars from China FOR RAILWAY AND TRAIN. “did the old lady not say first things first”?

I think I am getting bemused; somebody must help me here to comprehend.