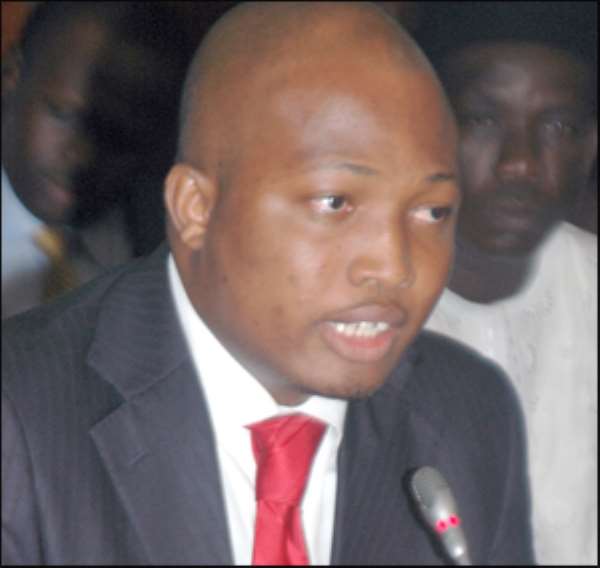 The two information ministers, Mr. Samuel Okudzeto Ablakwa and Mr. Agyenim Boateng, are two fine gentlemen that, any ordinary Ghanaian who's aim is to see most of the youth getting involved in politics will admire them and praise president John Evans Atta Mills for their appointment and approval by parliament.

But when we look at the way they are going about their duties can we say that they are in fact line with the aims and objectives set out for the ministry, the government and the good people of the country or have narrowed all their activities to the total satisfaction of their die in heart political party in power NDC and creating animosity in the system.

To tell the gospel truth many ordinary Ghanaians have not been satisfied by the way these fine gentlemen are going about their duties where by all that they say is reaction to something put out there by the opposition parties or persons who come out with observations and complain about certain short falls in the current administration of governance.

Studying the trend very carefully, one could say that the two ministers have totally veered off from the tracts set out for the minister which is to educate entertained and inform the general public about their rights, rule of law, illegal practices and the punishments one faces when involved them, causes of diseases and the need to prevent them, sanitation practices as well as moral education.

Quiet recently many were those who were heard calling for the head of the then substantive minister for information Mrs. Zita Okaikoi, with the simple charge that she was so dull in discharging her duties and for that matter she was not carrying the suppose goods of the NDC government to the people allowing the opposition parties to bite the government.

Does it meant that she was able to lie to deceive the Ghanaian who voted for the change in 2008 general elections which brought the NDC to power or she was cautious not to step beyond boundaries and attract the wreath of the public.

The recent pronouncements from the two gentlemen give one clear picture as to why certain faceless persons mounted pressure on the president to relocate her to the ministry of tourism.

A typical example is the statement made by the deputy information minister Mr.Agyenim Boateng that the government since it took office 15v months ago has created employment for 1.5million Ghanaians who were unemployed. What a crap I heard myself shouting after reading the story as I asked myself in which sectors were the employment placement made?

Thanks to Joy F.M. for their news file programme two weeks ago as I happened to listen to Nana Akomea challenging the figures and the authenticity of the figures since they were not coming from the rightful sources such as the Ghana Statistics Department, Ghana Labour Commission or the Trade Union Congress.

Mr.Agyenim Boateng's claim that the government has created employment for 1.5 million people since it took office should be treated as fallacy because it can never be true in anyway. If it was to throw dust into the eyes of the eligible Ghanaian voter then he must be told in his face that he has failed.

A simple explanation as to why what he said was a lie was that every where in the world no matter how a country is described in economic terms especially when it is doing good, self employment rise substantially when it faces economic recession at one part of its process.

Everybody knows that quiet recently United States of America[USA] and Canada experienced hard economic recession which saw most of the industrial giants which provides employment for millions of residents closed down resulting in lay offs that created hardships in peoples lives.

Though economy has not resurrected fully standing on its two legs firmly, reports coming out from authentic sources in Canada and published in the media across the country confirms that self employment rose substantially during the recent economic downtown while paid employment including government and private enterprises went down Metro News paper in Toronto, Canada on March 31,2010 reports.

What made the report authentic was that the study according to the news paper was conducted by Statistics Canada and not by any government minister sitting in his office and picking the phone calling party faithfuls somewhere to give him figures for propaganda purposes just to sink the opposition party.

Even in Canada where most of the world giant industries owned by America were situated Statics Canada reports that self employment increased by more than 100,000 or 4.3 per cent, between October 2008 and October 2009 whiles paid employment fell by 480.000 or 3.3 per cent.

Statistics Canada according to the newspaper said, the decline in paid employment largely predated the increase in self employment, raising the possibility that a large portion of the newly self employed could have been paid employees who lost their jobs early in the recession.

It further said, 28 per cent of recently laid –off paid employees came from manufacturing industries whiles many of the newly self-employed were in services.

Therefore with this facts and figures coming from an authentic source no one could challenge it as compared to that propaganda talk by Agyenim Boateng where he could not substantiate how many people were in the employment sector as against those unemployed out of the total population as at now and where particularly that they are hired for one to go and check.

It is time this political party campaign propaganda planned and adopted mainly to scatter main opposition parties or better still to deceive the electorate to believe that the government is doing well but in fact performing poorly must stop.

Let us empower the true agencies and departments to conduct their studies on regularly bases to advice the government on its decision makings. But for now, let us throw away the false statement made by the minister and wait upon the accredited agencies to do their work and come out with their findings that I will accept.

From: Stephen A. Quaye, Toronto-Canada.