Haiti Debacle: Why Good Intentions Must be Probed 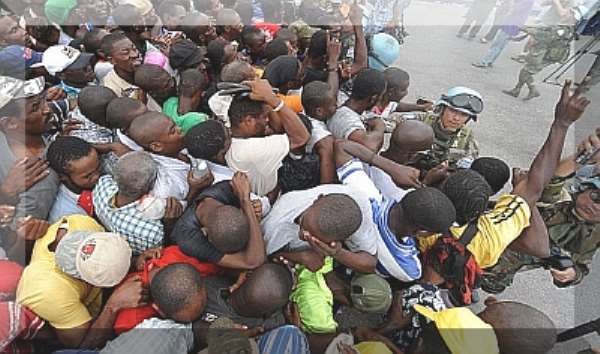 The attempted kidnap of 33 Haitian children by 10 missionaries from the United States raises serious ethical questions within the aid industry. What message does kidnapping children in the name of Christianity give to the world? Does it imply that their parents and Haitians in general are beyond recovery to better manage orphans if supported?

In the quest to support the traumatized people of Haiti, some have found quick fixes: joining the earthquake in destroying the very unit of society – the family. The natural instinct of children to look up to their parents for guidance and protection is being destroyed and replaced by the 'look-you-outer-there for help' attitude. In the short run, it may look and feel good but in the long run, we loose the sense of Haiti.

As much as we agree that in times of catastrophe, societies need assistance to recover and forge ahead, the American missionaries might probably be innocent victims illustrating just what their society thinks of Haitians as a people, and by extension, poor black people.

Clawing victims out of rubble with bare hands in Haiti illustrates just how the skewed global economic system has kept the third world on the scratch-the-ground-level (primary production). Africans calling for a deep probe into the negative effects of aid ought not to give up simply because swanky writers point at the use of machines vis-à-vis use of bare hands to illustrate Western superiority. Instead of urging Africans to shut up and wait for another catastrophe to strike, a fair debate ought to focus on how to remove the roadblocks that prevent productivity among the people of the South, and Africans in particular.

The way some western agencies are handling the Haiti catastrophe is reinforcing the erroneous belief that only the “West” can rescue the “South.” As such, the accused Christian missionaries find it in order to “sing” and throw it back on blacks without appreciating the fact that black hands are still in chains. Many bloggers pushing the argument that only “Whites” rescued blacks in Haiti fail to notice that the hand of the blacks are tied by the current global market system. Even from a media perspective, it is not easy for the narrow Western lenses to capture black efforts in rescuing Haiti.

It is up to us Africans and those of African origin to probe the system that has over the centuries hid “malicious software” within the aid industry to the detriment of our person. The Haiti debacle aptly captures Jacques Depelchin's argument in the book Silences in African History: between the syndromes of discovery and abolition; that the Western world causes problems and positions itself as liberator. By overthrowing reformist leaders in Haiti that were keen on fair labor laws and increased productivity of their citizenry, the Western world gave birth to a Haiti whose prison “cannot feed the 10 accused missionaries.”

As we confront these issues, it should be clear at the back of our minds that the actual war is not even against stealing of children and natural resources, but on systemic destruction of the African mindset and attitude by malfunctioning rescue packages.

The human spirit pushes individuals regardless of color or race, to assist each other in times of catastrophe but should not allow malicious characters to override good intentions. It is time blacks and Africans emerged from over 5 centuries of “silences” and put an end to this cyclic syndrome of “discovery” and “abolition.”