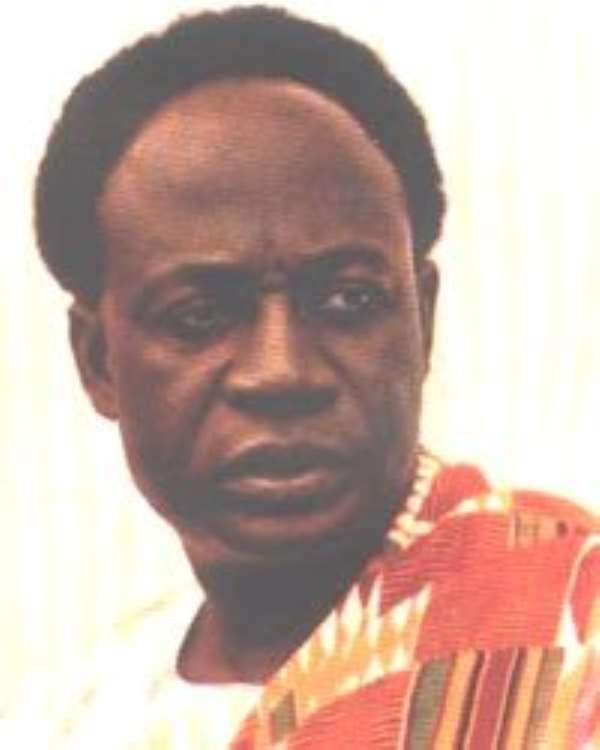 I have waded into the murky waters of these 91 comments made on this poem; Dr Nkrumah's prophecy and I have picked very informative comments about the life & times of Osagyefo Dr Kwame Nkrumah & what was the world politically like about his time. Like one of u here have said it was during the cold war. Will you expect the Western world to encourage the pollution of Africa with communist ideolgy when they themselves were having a hard time fighting the system in the USSR, China, Vietinam, North Korea & Cuba? From your points or comments I can write these few comments purely on unbiased grounds as a foreigner - of course I am not Ghanaian and therefore have no partisan party bias or sympathy over this point.

Lets get one thing clear here, the poet is not writing what Dr Kwame Nkrumah said. He is simply expressing his views poetically of what your country is now like without Osagyefo, depicting him as a light that quenched and the country went down some backward path or dark tunnel, politically,educationally,technologically and otherwise as he was expressing by the poem but I think he is a bit melancholic or melodramatic here about his views or poetic expressions. Ghana in the first place is not as bad educationally & politically as he is saying. Today you people are one of the promising democracies in West Africa - I mean you are showing us what democracy should be - free and fair elections where peoples votes count and also educationally you have a stable environment. Most of us in this region who could not afford to send our children overseas are bringing them to Ghana to study. Even by way of infrastructures, u are well ahead compare to some of us Africans who have oil money but could not boast of electricity and good road or even healthcare. U hear of some countries in Africa sending there presidents overseas for treatment and some even die there while these countries are rich enough to build a state of the art hospital where any president in the world will not feel insulted to receive medical care from.

U guys should be proud of your leaders and encourage them by making supportive remarks about them when u comment on them and also pray for them. If I, a foreigner could be visiting this site and be reading these stuff, I believe ur leaders are also reading them. Encourage them, they are doing a good job of governance irrespect of their perceived weaknesses compared to other West African countries.

Dr Kwame Nkrumah was a great idealist so was Karl marx, Mao, Lenin, Generalismo Joseph Stalin and all the whole lot of proponets of communist ideology because they all believe in the independence of the human race even without God. This, he started leading Ghana to by way of establishing state run institutions and industries/ research centres - your atomic energy research institute is a proof to this. If he had copied that spirit and was implementing those achievements without also repressing peoples freedom of expression and allowed multi-party system to exist, that would have been great but he also copied the negative aspect of communism known for its hated suppressing of people freedom of expressions, religious pluralism and all that.

I think he missed out on those aspects. It is good to have a balanced view of something in other to learn from it. If communism is honey, so long as it suppresses peoples opinions and ideas & even religion, I wont touch it with a pole of stick. The reason is because one day those things suppressed will boil out & kill. Any ideolgy that cannot stand or shys away from public debate and scrutiny is not good enough for the people, anytime, anywhere, because the bible said that in the multitude counsel the king is established but in the want of counsel, the throne runs into trouble. History has vindicated me on this view - where is USSR today?

From the ancient Hellenistic civilisations where democracy originated and even in the old Roman empire that went into popularisation of the free judiciary system we we mrdern people copied from today, you will see that matters that concern the people were freely debated on until they arrive at a concesus (Check out Socrates and Pythagoras writings). The danger about suppression of peoples views is that you may end up throwing the baby away with the bath water. A good example was the execution of the great Italian scentist & inventor of the pendulum clock, Galileo Gallile who came up one day and said that the earth revolves round the sun contrary to the generally held view then that the sun and all the known planets then revolves round the earth. He was charged for heresy by the then religious government that holds sway in Rome in those days and publicly executed but what is the true known position about this phenomenon today? Galileo's view.

So shall every other repressive govt or institution collapse (because of want of good ideas to evolve into something that will stand the test of time after it has succeeded in eliminating all its great idealist) wherever they are found in this world. Here I rest my submission.