Another Coup In Ghana. Is The Time Right? 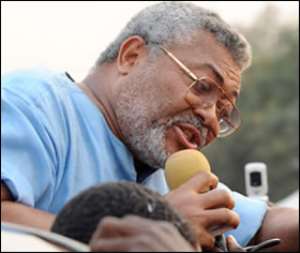 A couple of days ago, as I wandered rather aimlessly around the internet my attention was momentarily arrested by a Ghanaian website which had a brief home-made documentary depicting Chairman Rawlings' chilling broadcast on Ghana television after his 1981 putsch. Even though I had seen this footage in the past I could not help but attend to it again. The audacity and narcissism that characterised this broadcast had never ceased to amaze me. As this obviously disgruntled soldier spelt out the words that returned Ghana to the dark ages I tried to understand the psychology of the man. I scrutinized his rather gaunt features, his unusually wide eyes and the movement of his lips as he audaciously and single-handedly dissolved parliament, abolished all political parties and political association, arrested and incarcerated the president and the vice president. “HOW DARE YOU”, I heard myself shout at the computer. “WHO GAVE YOU THE RIGHT? ON WHAT BASIS DOES ONE INDIVIDUAL DECIDE THAT REMOVING A DEMOCRATICALLY ELECTED GOVERNMENT WAS RIGHT? HOW DARE YOU!”

Over the years I have listened to Chairman Rawlings and his posse of yes- men strenuously defend the two putsches they so recklessly masterminded with great consternation. For starters they rather craftily label the two takeovers 'revolutions' in a vain attempt to place these dastardly acts in the same league as bona fide classical revolutions such as those of the French and the Americans. Secondly they shamelessly point to the wanton corruption that plagued the country in previous regimes as well as the shortages of food and essential commodities. Dear reader the above are among the main reasons that Rawlings and his posse postulate as justification for the two bloody putsches in 1979 and in 1981 which saw the execution of countless citizens including General Kutu Acheampong, General Akuffo, Akwasi Amankwah Afrifa, Robert Ebenezer Abossey Kotei, Roger Feli, Joy Amedume, Air Vice Marshal Boakye, Colonel Roger Felli, Maj. Gen Neville Alexander Odartey-Wellington not to mention the countless Ghanaian citizens whose lives were shattered as a result. As incredible and preposterous as the above reasons sound let us, for the sake of argument, simplistically assume for a moment that corruption in Ghana could be squarely blamed on the above-named but did it justify their execution? (and I agree that corruption was in the country then as it does now). Again let us fatuously assume that the execution was warranted but whose right was it to sanction and carry out such executions? That Rawlings could single-handedly take it upon himself to order the execution of these and other people in hurriedly arranged kangaroo court sessions under the guise of an apparent 'revolution' is both craven and contemptible. If a handful of crazed barbarians cry for blood and sadistically demand “let the blood flow” does the 'selfless' 'Junior Jesus' acquiesce to such savage demands? Oh come on! Permit me to put the above in a clearer perspective. In the face of accusations of corruption, abuse of office and failed promises that have been visited on certain elements within the successive governments of Rawlings, Kufour and Attah Mills since 1992 would it be right for one disgruntled Ghanaian individual to take it upon himself to, as it were, right the wrongs in Ghana via a coup detat? Is a coup warranted because John Mills so blatantly disregarded his manifesto pledge of reducing the prices of petrol? How about accusations against John Kufour that his government had wantonly squandered state resources in the building of the presidential palace, the acquisition of two aircrafts and the sale of Ghana Telecom? Were these sufficient grounds for removing him from power through the barrel of a kalashnikov? Consider Rawlings' thuggery so unashamedly displayed by wrestling Kow Nkensen Arkaah to the ground, the brutality meted out to Salassie Djantuah and Kweku Baako or the manhandling of the 'Kumi Preko' demonstrators for breaking up a relationship with Zenato Rawlings, exercising a democratic right to free speech and for freely associating respectively? Do even these acts that so blatantly spurned the rule of law warrant a coup? On what moral, economic or political basis can a coup be legitimately organised in any of the above situations, dear reader? I am of the opinion that nothing short of genocide as defined by the United Nations warrants the deposing of constitutionally elected government. The begging question is why then did Rawlings not only overthrow a constitutionally elected government but also execute the countless people who deserved their day in court irrespective of how grave their offences were? The only reason I can think of was to satisfy potentate Rawlings' insatiable thirst for power. If indeed the man could offer justifiable reasons for the June 4th putsch on the questionable basis that it ousted a military government two weeks before a scheduled election, what reasonable excuse can he give for the removal of the democratically elected government of Hilla Limann? Indeed if even the Limann government was corrupt, I dare assert that it was a democratically sanctioned corruption which should have been brought to justice in accordance with the provisions of the extant constitution of the time. Under no circumstance was Rawlings justified to depose the Limann government by force.

I hasten to point out that throughout human history a cohort of narcissistic prima donnas much like Rawlings have, under the guise of bringing deliverance to the disenfranchised 'masses', staged bloody 'revolutions' only to turn out to be worse than the regimes they overthrew. Examples in include Hitler, Mussolini, Fidel Castro, Muamar –King of Kings-Gadhaffi etc. Playing on the emotions and the vulnerabilities of the citizenry in general and the uneducated rural folk in particular, these myopic, dogmatic, pharisaic and vainglorious 'revolutionaries' employ carefully rehearsed bombast that presents them as psuedo-messiahs championing the rights and the cause of the down-trodden. A critical appraisal of these usurpers of state authority reveals the following quintessential hallmarks. Firstly a near-religious belief in their singular right to prognose,diagnose and then to provide the panacea to all that plague a people. Secondly, the chronic use or rather misuse of the 'of the people' rhetoric in an attempt to appear as the ever-humble and ever-munificient champion of the cause of the disenfranchised who has been inadvertently propelled into power by divine providence. Thirdly the employment of long-winding often theatrical and convoluted extemporaneous speeches which often enchant the uneducated mind but is patently nonsensical otherwise. The latter is a key characteristic. The body language employed when they speechify is of particular note and is particularly characteristic of Hitler, Castro, Rawlings and Mussolini. Examples of these speeches include Rawlings' infamous 'Boom' speech, Gaddafi's recent marathon harangue at the UN and, last but certainly not the least, Castro's record setting 4 hour 29 minute speech at the UN in 1960. Fourthly and understandably a congenital distaste for free speech even when they succeed in morphing into apparent democratic governments as well as the employment of thuggery and state sanctioned brutality. This last characteristic was taken to a new low by John Rawlings' physical assault of Kow Nkensen Arkaah.

Many a Ghanaian person has posited rather childishly that Chairman Rawlings is to be credited with the current democratic dispensation in Ghana in that his long stratocratic rule prepared fertile ground and served as the foundation for the 1992 democratic epoch which the Chairman so 'selflessly' and 'humbly' permitted-something he was not obliged to do. In other words the prolonged suppression of freedom and the taming, through the threat of force, of the collective Ghanaian spirit by Rawlings had succeeded in rendering the Ghanaian populace benign enough to usher in democracy at the time that he did. I cannot help but be peeved by this sophormoric and asinine way of looking at this horrible episode of Ghanaian historiography. Assuming that the preceding conjecture is indeed the case are these Ghanaians implying that the end justifies the means? If somebody seizes your house(because according to them it was the right thing to do), keeps it for 20 years and gives it back to you do you congratulate him for keeping the house in 'good shape' or does the person still deserve to be arrested and prosecuted? I leave this question to your discursive mind to muse over, dear reader.

If Messrs Rawlings and Castro's exemplars are to be emulated then perhaps as we approach the 31st of December all Ghanaians unsatisfied and disgruntled with the Mills administration should seriously consider starting a 'revolution' of sorts with a view to saving the country from destruction. In fact being light-skinned in complexion perhaps I may offer myself as the new “Junior Jesus”; the saviour of the disenfranchised Ghanaian citizen. WHAT BLATANT AND ABJECT FOOLERY!