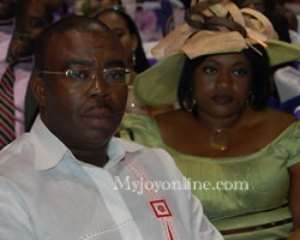 
An Accra Fast Track High Court has ordered former Information Minister Stephen Asamoah Boateng and his wife Zuleika to present their traveling passports to the state.

The court presided over by Justice Charles Quist issued the instruction, insisting that the couple had on two occasions attempted to travel while under investigations.

Nine persons including former deputy Information Minister Frank Agyekum face 14 fresh charges – including conspiracy to commit criminal offense, forgery of official document and attempt to defraud the state – after nine earlier criminal charges preferred against them had been dropped.

According to Joy FM's Sammy Darko who was in court the prosecution dropped all nine earlier charges against the accused.

The court admitted the defendants to a bail in the sum of GH¢10,000 each.

Mr Frank Agyekum is standing trial for signing a letter for the release of an amount in excess of GH¢86,000 to Flexiform Ventures when he was aware "due process" was not followed in awarding the contract.

Mrs Asamoah Boateng is also said to have taken a contract for a project on which she had no technical know-how. She is alleged to have secured business documents from her cousin Yasmin to get the contract.

The court has meanwhile adjourned hearing to August 27.