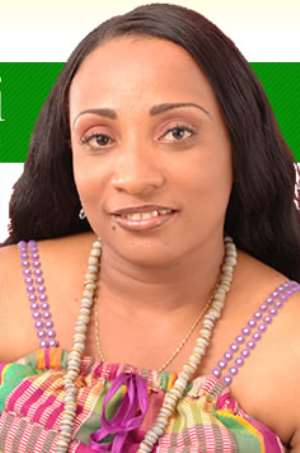 Accra, Sept. 8, GNA – Mrs Zita S Okaikoi, Minister of Information, on Tuesday at a Fast Track High Court in Accra, testified for the prosecution in the case involving Mr Stephen Asamoah Boateng, former Minister of Information and National Orientation, his wife Zulieka Lawria, six other officials and a legal non-entity.

They are being tried for allegedly conspiring to defraud the state of GH¢86,915.85 as a result of renovation works carried out at the Ministerial Block of the Ministry during Mr Asamoah Boateng's tenure.

The officers are being tried for various counts of conspiracy to defraud the state, contravening the provisions of the Public Procurement Act, forgery of documents and uttering forged documents and deceit of public officer.

They have pleaded not guilt at the court presided over by Mr Justice Charles Quist, which has admitted them to bail in the sum of GH¢10,000 each with a surety each.

In her evidence in chief, Mrs Okaikoi said when was going through some files on assumption of office as a minister on June 5, she came across documents signed by Sampong requesting payment to Phlexicom Ventures for renovation works carried out at the Ministerial Block of the ministry.

The minister said she quizzed Sampong as to why he should sign a letter for the release of funds without her consent and the knowledge of the two deputy ministers at the ministry.

Mrs Okaikoi, who is also a legal practitioner, said out of her amazement over Sampong's conduct, she wrote a letter to the Ministry of Finance on June 8 halting any payment.

At a meeting held at the ministry, she said issues concerning Phlexicom ventures came up and Sampong apologized for his conduct.

Mrs Okaikoi said Sampong told her that the renovation included the tiling of the offices of the Minster and Deputy Minister.

According to Mrs Okaikoi, Sampong said the minister in 2008 could not effect payment because, Mr Lawrence Dzakpa, the Principal Accountant of the Ministry, refused to approve the payment for the renovations works.

Mrs Okaikoi said Mr Dzakpa in his explanation stated that he (Mr Dzakpa) had two requests on his desk.

The requests, the minister said, were payment in respect of renovation work to Phlexicom Ventures and payment for three vehicles acquired from PHC Motors.

Mrs Okaikoi said Mr Dzapkpa told her that he had signed for the payment for the three vehicles from PHC but declined to pay for the renovation works because it lacked proper documents to facilitate payment.

The Minister said she asked Mr Sampong whether he had rectified and regularized the contract.

The witness said she was concerned about the payment of the GH¢86,915.85 because the Ministry had been given a ceiling of GH¢50,000 cedis for renovations under the Public Procurement Act.

Mrs Okaikoi said soon after the management meeting, she expressed her displeasure over the signing of the documents and wrote letters to the Chief of Staff with copies to the security agencies.

She said Mr Samuel Okudzeto Ablakwa, a Deputy Minister of Information, handed over the letters to the Bureau of National Investigations for further investigations.

The minister said later Sampong came to her office to apologize for his conduct.

The minister said while she was on admission at the SSNIT Hospital, she received a phone call from Sampong informing her about his (Sampong) retirement.

According to the minister, she told him that he would call him to inform him about who he should hand over to.

Meanwhile, lawyers of all the accused persons have responded to the charges preferred against their clients.

Nene Amegatcher, who represented Asamoah Boateng and his wife, said the story of the prosecution was unsustainable and that could be seen in the way and manner the charges were withdrawn and substituted.

Nene Amegatcher said Asamoah Boateng on assumption of office in May 2008 paid working visits to the Ministry's regional and district offices to find out the prevailing situation on the ground.

During his visits, defence counsel said, one of the major problems he found was the poor and bad state of offices.

This, counsel said, posed danger to workers of the Ministry.

Counsel said it was Asamoah Boateng's vision to see to it that workers of the Ministry of Information worked in a “conducive environment”.

According to the lawyer, there was nothing criminal about Asamoah Boateng leaving a “lasting legacy” when he dealt with unhygienic conditions at the Ministry.

Nene Amegatcher disclosed that it was at a directors' meeting that they unanimously agreed to improve conditions at the Ministry.

He also denied that Asamoah Boateng suspended all investment programmes and re-directed funds to the renovation of the Ministerial Block of the Ministry of Information (MOI).

Nene Amegatcher said Asamoah Boateng did not fabricate any invoice or documents.

In the case of Zuleika, Nene Amegatcher said she did not rob the state of the GH¢86,000 cedis because she was a self-made business woman.

Mr Egbert Faibille, who represented Agyekum, said his client signed the letter so that government could not be sued.

Mr Attah Akyea who represented Denkyira noted that charges preferred against his client were anaemic adding it was difficult for a contractor to conspire with Asamoah Boateng and Agyekum.

He said they were only waiting for what the prosecution would put across.

Mr G.S.K. Babanawo, who represented Supreme Procurement Agency Limited and Proper Arku, said the agency since 2006 had successfully conducted consultancy businesses with some Ministries and Agencies without any hitches.

According to him they had not conspired with anyone to defraud the state.

The matter was adjourned to September 17.
GNA