I Fasted At BNI - Asabee 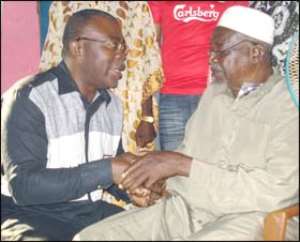 Former Information Minister, Stephen Asamoah-Boateng, also called Asabee, was released from the dungeons of the Bureau of National Investigations (BNI) on Saturday afternoon after a dramatic arrest and detention on Thursday.

Speaking to DAILY GUIDE soon after he breathed an air of freedom, Asabee revealed that he declined to eat food offered him by agents, saying he fasted for the period that he was a 'guest' of the security establishment.

“I fasted for 48 hours. I ate biscuits in the BNI cells on my last day and these were provided by my wife. I did not eat their food. I also avoided their prison dress,” he said defiantly.

The former minister is due in court today to face a number of charges leveled against him and five others including his wife, Zuleika, by the security organization about which he said, “The case would be interesting.”

Sounding confident and nowhere near being broken down as a result of the 'show of power' ordeal he went through last week, the former minister headed for the house of Salifu Maikankan who died on Friday from alleged police brutality, to sympathise with the family.

Maikankan was one of the picketers at the BNI offices where Asabee was being held Thursday night.

At the Kotobabi residence of the 34-year-old NPP activist, who is thought to have died as a result of an intense intake of teargas fired by policemen deployed to the BNI offices, Hon Asamoah-Boateng, in the company of his wife, sympathized with the bereaved family.

The deceased, according to some eyewitnesses, was also hit in the chest with the butt of a rifle.

Hon Asamoah-Boateng asked the bereaved family to take heart, as according to him, he died of a good cause and would forever remain a part of Ghana's history.

It is a painful experience, he acknowledged, adding that being a Muslim, the remains of Maikankan should have been buried by now.

Ghana, he noted, is passing through unusual times and gave the assurance that the party's leadership would ensure that the process is expedited so the body can be buried according to Islamic rites.

The former minister's visit, his first port of call from the BNI cells, was met with a widespread commendation by the many persons who turned up to sympathise with the bereaved family.

He parted with an undisclosed amount of money to the family and promised more support when such is needed.

He was received by both father and mother of the deceased alongside other family members.

Outside the house, Asabee was mobbed by persons who wanted to have a word with him.

The former Information Minister was released to his lawyers late Saturday afternoon after he was granted bail by the BNI.

He has been asked to report today at court where nine charges among them, conspiracy to defraud the state, would be preferred against him and five others.

Hon Asamoah Boateng was arrested by the BNI after he reported to them on hearing that he was wanted. His lawyers were also heckled and physically thrown out of the security premises by BNI operatives.

His appearance in court this morning and the subsequent trial would be keenly followed by many Ghanaians, especially cherishers of the rule of law.

With the former minister promising interesting sessions as he faces his charges, there cannot be shortages of thrillers as the learned personalities engage each other in the unfolding days.

The particulars of offence, according to sources, suggest that the accused persons allegedly conspired to breach the Procurement Act by not following due processes in obtaining a contract amounting to GH¢86,000 for renovation works at the Ministry of Information.

Even though six persons have been charged for the offence, only Asabee was held in custody, raising questions about the motive of his arrest.