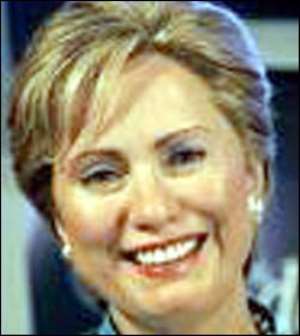 
US Secretary of State Hillary Clinton is due to hold talks with Somali President Sheikh Sharif Sheikh Ahmed in Kenya's capital, Nairobi.

She is expected to endorse Somalia's beleaguered transitional government amid fears the country is becoming a haven for Islamist militants.

Large swathes of Somalia are out of the government's control.

With the al-Shabab militants growing in strength, more than 250,000 people have fled their homes over three months.

Mrs Clinton will hold talks with the UN-backed Somali leader on the second day of her African tour.

Somali Foreign Minister Muhammad Abdullahi Omar told the BBC the US was "seriously engaged" in helping bring stability and peace to his country.

Wreath-laying
Before Thursday's meeting, she honoured the victims of the August 1998 attacks on the US embassies in Kenya and Tanzania, in a wreath-laying ceremony in Nairobi.

More than 220 people were killed and 5,000 injured in the first major attack by al-Qaeda on US targets.

AP news agency quoted her as saying that the embassy site was a reminder of "the continuing threat of terrorism, which respects no boundaries, no race, ethnicity or religion, but is aimed at disrupting and denying the opportunity of people to make their own decisions and to lead their own lives".

There are reports that al-Shabab - the Somali Islamist group which favours strict Islamic law and is accused of links to al-Qaeda - is gaining support from militants around the world.

Earlier this week, police in Australia arrested several men, charging them with planning suicide attacks on a base in Sydney and saying they were linked to al-Shabab.

The BBC's Will Ross in Nairobi says President Ahmed needs all the support he can get. Pro-government forces are only in control of a small section of the Somali capital, Mogadishu.

Our correspondent points out it is far too dangerous for the American secretary of state to venture into Somalia, as the fighting continues.

Speaking on the sidelines of an economic summit on Wednesday, Mrs Clinton said: "We know we're facing a very difficult conflict, and we also know that the presence of al-Shabab and terrorist elements within Somalia poses a threat," reports Reuters news agency.

Somalia's foreign minister told the BBC's Network Africa programme that Washington's support for his government was a "golden opportunity".

"We believe we have reached a critical stage where we hope to build momentum and mass to enable us to get to the next stage of stabilising the capital and the surrounding regions and then to move on."

The US admits it has supplied pro-government forces in Somalia with over 40 tonnes of weapons and ammunition this year, and another delivery of weapons is predicted, says our correspondent.

But there are growing fears that the Horn of Africa country - which has been without an effective central government since 1991 - risks becoming a haven for terrorists.

America's top diplomat described as "disappointing" Kenya's failure to investigate a bout of violence that left at least 1,300 people dead after the disputed December 2007 presidential election.

But she stressed that harnessing that potential would require democracy and good governance.