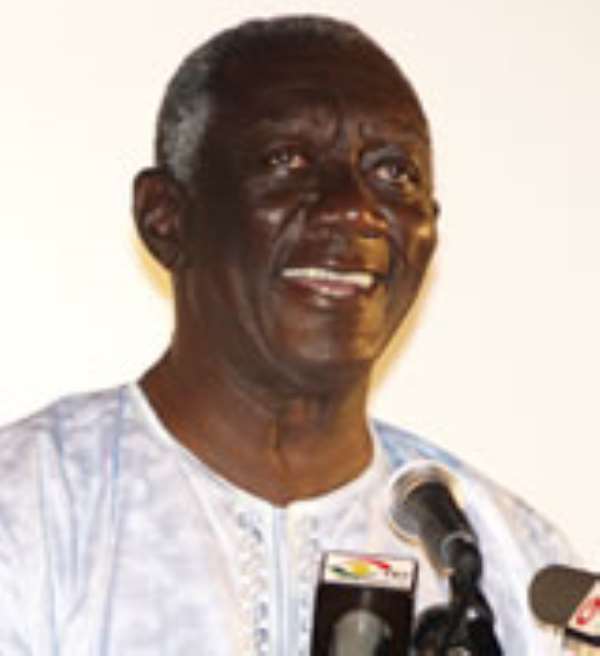 
Former President John Agyekum Kufuor has for the first time expressed his view on the presidential retirement package which has generated public outcry.

A source close to Mr. Kufuor told DAILY GUIDE that the former President was of the opinion that three cars would be enough for any retiring head of state, as against the six that the Chinery Hesse Committee recommended in the package.

The source noted further that it is former President Kufuor's desire that the $1 million seed money recommended for the establishment of a foundation be used for the institution of a professorial chair for research at one of the public universities.

It explained that the quantum of the emolument should not be viewed as a gift greedily put together for the former President, but rather as a resettlement package put in place to dignify the presidency of the Republic of Ghana, pointing out that after all, the former President used his private residence for his eight-year reign.

The source reminded Ghanaians that former President Kufuor had served the country for eight years, shuttling between his private home and office nearly every day without surcharging the state for it, adding that all those sacrifices were made out of Mr. Kufuor's strong desire to serve his country.

The Chinery Hesse Committee recommendation has caused public outrage such that former President Kufuor had been criticized over the contents of the report, with many contending that it was a deliberate ploy to further impoverish the state kitty.

The report, which was approved by the Ghanaian Parliament on 6th January 2009, included two residential facilities, six vehicles, overseas travels, medical and dental services, entertainment, non-taxable ex-gratia, establishment of a $1 million foundation, and other miscellaneous benefits.

The quality of the two accommodation facilities (one in Accra and another elsewhere), according to the report, should be of a standard befitting a retired Head of State who must be called upon to receive and entertain the network of dignitaries including Heads of State.

It said the standard of accommodation must be determined in consultation with State Protocol. The residences would not revert to the state in the event of the demise of the receiving former president.

The former President is to get a fully equipped and furnished office, staffed with five professionals and adequate secretarial support within the nation's capital.

The vehicles should be three saloon cars, two cross country vehicles and one all-purpose vehicle.

Travel in congested traffic should be facilitated appropriately with police escort, bearing in mind security considerations.

A former President who has served two consecutive terms should be entitled to a period of 60 days overseas travels taking into account the longevity of service and accompanying stress given the demands of the office.

Other miscellaneous benefits cover medical and dental services, adequate 24hour security service should be provided at all times, entitlement to Ghana diplomatic passport and diplomatic courtesies for former President and spouse, plus adequate entertainment provision by state protocol.

But sources close to President Kufuor say there is no such desire to milk the country dry, but rather, the proposal only seeks to restore dignity to the presidency.

For instance, former Deputy Information Minister, Frank Agyekum, said the package is meant to guarantee comfortable living conditions for ex-presidents after they have left office so as to discourage them from wanting to hang onto power and loot national treasure.

He said when Presidents feel their post-presidency life will be bleak; they are tempted to hang onto power.

Austin Gamey, a consultant to the Chinery Hesse Committee on emolument for former Presidents, said Parliament is to blame for the commotion that has greeted the announcement of the proposed package.

He told Citi FM that the final figures acquired were based on the prevailing economic conditions of the country two years ago, adding that the nation at the time could afford the proposed ex-gratia award.

According to him, it was up to Parliament to have taken into consideration the current economic conditions before giving its approval or otherwise.

Police made me stand in the sun for 5hrs for not wearing fac...
24 minutes ago