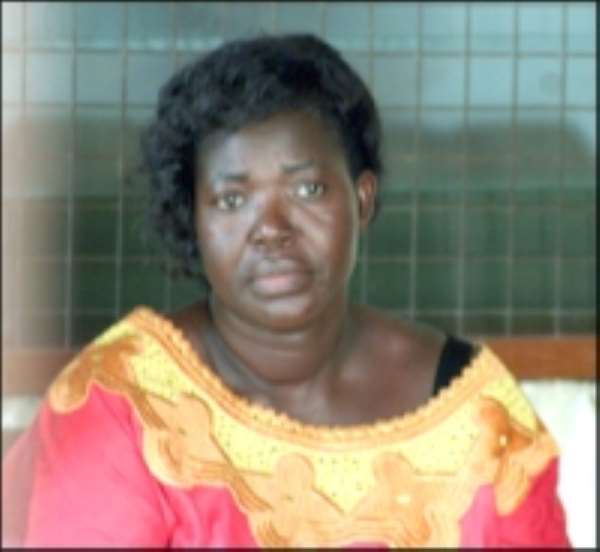 Lance Cpl Kennedy Frimpong, one of the policemen who arrested Paulina Ampomah, the suspect at the centre of the printed bank statements which alleged that President Kufuor and some of his ministers had stolen money, on Wednesday testified in court that Ampomah told the police after her arrest that she got the material from activists of the National Democratic Congress (NDC) at a rally.

He told an Accra Circuit Court where Ampomah, a single mother of two doing her master's at the University of Cape Coast, is being tried that she denied being the originator of the printed materials, saying she had them from someone whose name she did not disclose at an NDC rally at the Cape Coast Jubilee Park. The court was presided over by Mrs. Ivy Heward-Mills.

The student, a native of Assin Fosu, has pleaded not guilty to reproducing the printed materials to persons with the aim of causing fear and panic, and also denied forging bank statements.

About 130 copies of the statements purported to have originated from Prudential Bank Ghana Limited were found in her KIA saloon car.

Frimpong, who was led in his examination-in-chief by ASP George Abavelim, the prosecutor, said he was on duty in Cape Coast on December 6, 2008 when he received a call from an informant that someone was distributing some bank statements at Assin Fosu which alleged that President John Agyekum Kufuor and 24 of his ministers had stolen money.

He said he immediately informed one of his colleagues, Ernest Gyasi Ewusi, who went with him to the St. Francis Xavier Hospital at Assin Fosu where the documents were being distributed and met four persons including a certain Hayford Boafo with copies of the statements at the Out Patients Department (OPD).

He said they inquired about the source of the statements and the accused person was identified and they consequently had her arrested before taking her to the Assin Fosu District Police Command.

The witness said when interrogated, the mother of two admitted the offence and said she got the statements at an NDC rally; while a search in her KIA saloon car revealed more than 100 of the printed statements.

Under cross examination by Kwabla Senanu who is the counsel for the accused person, the witness said he had been a policeman for a year, and that he was assigned to the area four days to the presidential and parliamentary elections.

The Policeman denied that he was an undercover agent assigned to the area for special operations, saying he knew that the said Hayford Boafo who was also found with copies of the statements was a political activist of the New Patriotic Party whose master is Hon. Kennedy Agyepong, Member of Parliament for Assin North.

When asked whether his client was present before her car was searched and whether he knew that it was the said Boafo who put the documents in her bag, the policeman said he had no idea.

In addition, the witness said he was not assigned any vehicle for his personal use but used a vehicle belonging to Ewusi for the operation.

Counsel for the accused person asked for a copy of the witness' statement which was given to him; and he in turn asked the witness to read the statement aloud in court.

The case has been adjourned to December 30, 2008 for further cross-examination.