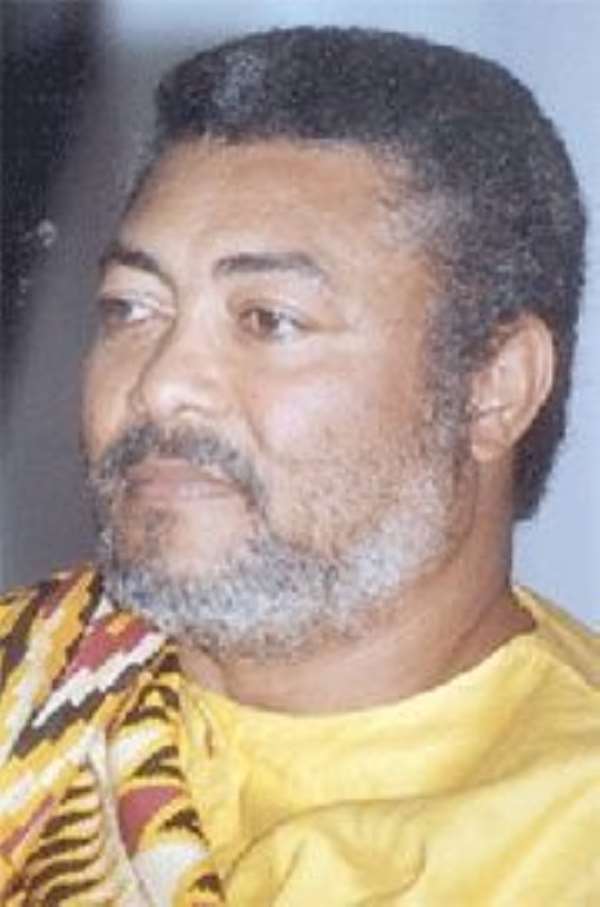 Former President J.J. Rawlings has denied that the commander of his security drew a pistol at the Akwasidae festival in Kumasi.

He said his body guard's display of a high sense of professionalism and discipline prevented what he described as a nasty scene at the durbar ground.

He therefore described the media twist to what happened as a desperate attempt by the New Patriotic Party (NPP) to cause dissatisfaction to his person and the National Democratic Congress (NDC) as a whole.

Reading a prepared text on behalf of the former President at his Ridge residence in Accra, a Senior Member of the Council of Elders of the NDC, Mr James Victor Gbeho, said President Rawlings had been attacked relentlessly, illegally stripped of his diplomatic privileges and persecuted for eight years without dimming his charisma” and wondered whether they could succeed in two weeks.

On the Golden Tulip incident, Mr Gbeho said Mr Babs Hammer, a photo journalist on the former President's entourage, was assaulted by the security detail and policemen accompanying the NPP Presidential candidate and later dumped him at the Buffalo Unit of the Kumasi Central Police.

He said Babs was hit with the butt of a rifle and severely beaten before being dumped at the Buffalo Unit.

“But in a bizarre twist of the facts, no other person than the Ashanti Regional Police Commander rather stated that Babs was assaulted by sympathisers of the NPP who questioned why he was taking shots of their presidential candidate without permission,” he said.

Mr Gbeho, commenting on the Akwasidae incident, said when the entourage of the former President arrived at Manhyia, they first went to greet Otumfuo Osei Tutu after which the Otumfuo delegated one of his secretaries to lead them to greet his sub-chiefs, as well as dignitaries, including President Kufuor and Nana Akufo-Addo.

He said as the entourage, including Nana Konadu Agyeman Rawlings, were seated, an unidentified security operative bumped violently into the group, nearly knocking down Mrs Rawlings.

“Surprised at what happened, Mrs Rawlings decided to wait for the husband to conclude the process without her but she was impressed upon by her husband to join him,” he said.

He said Mr Emmanuel Amanor, the security commander of former President Rawlings, who was behind the group, was accosted by four police officers who violently gripped and frisked him.

Mr Gbeho said noticing that he had a pistol in a holster, one of them attempted to forcibly remove it but Amanor, realising that the pistol could cock and go off, pulled up his shirt and opened the holster to allow for easy removal by the officers.

He said immediately the pistol was removed, the police officers screamed in unison as if the weapon had been brandished or even removed by Amanor.