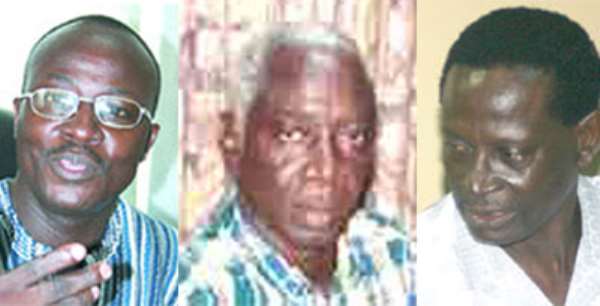 In the heat of concerns being expressed by various stakeholders about the alleged bloated voters register and suspicion of rigging, the New Patriotic Party (NPP) has called on the Electoral Commission (EC) to institute a transparent investigation into the matter.

In effect, the party has asked the Commission to involve the various political parties in their investigations into the case.

This, according to the party, would not only seek to erase doubts being harboured about the voters register but would also safeguard the Commissions' credibility.

Speaking at a press conference at the party's headquarters in Asylum down, General Secretary of the NPP, Nana Ohene-Ntow said “we do not object to the EC carrying out its own internal investigations, however, with the lingering of the impasse without any open, transparent approach towards getting to the bottom of the matter, the suspicions and mistrust brewing over the register can only get worse.”

He therefore called on the Electoral Commission to institute an open and transparent stakeholder investigation into the issue as a matter of urgency.

Despite raising the concern, the party noted that it had never sought to call the institutional integrity of the Commission to question. “We do respect the competence of the Commission in the mandate given it by the constitution and other legal instruments of the state”.

However, in the ensuing controversy surrounding the voters register, Ohene-Ntow said the EC could have acted more expeditiously than it has done so far.

The NPP's concern has arisen out of the what it described as unwarranted accusations of its political rivals in the National Democratic Congress (NDC) to the effect that the voters register in the Ashanti region had been bloated in order for the EC to rig upcoming elections in favour of the ruling party, the NPP.“Clearly, this is baseless and mischievous fabrication calculated to call the credibility of the Electoral Commission, the NPP and the whole electoral process in doubt” said Ohene-Ntow.

Had the NDC gone ahead and called attention to any shortfall in the register, the NPP said they would have succeeded in convincing everyone that their intention was noble.

To fabricate a charge against the NPP, its General Secretary said, simply betrays the NDC's sinister agenda and confirms their earlier intention to raise doubts over the results of the upcoming elections in the most likely event of the NDC losing.

The party likened the circumstance to giving a dog a bad name to hang it.

According to the NPP, it was thus convinced by this agenda of the NDC, taking into consideration recent pronouncements by the party's Flagbearer, Professor John Evans Atta Mills and other members of the party.

Professor Mill is on record to have said that the NPP was preparing to rig the December 2008 elections and should that happen, the carnage and chaos that rocked Kenya would be visited on Ghana.

The NPP has thus condemned these threats and false accusations and the attempts by the NDC to create an excuse why there should be mayhem in Ghana in the most likely event of them losing the elections. It has also called on Ghanaians not to be intimidated by these threats and to go to the polls on December 7 to cast their ballot in accordance with the dictates of their conscience and personal convictions.

As a political party, the NPP noted that it does not register voters let alone have the will or the capacity to rig any elections. “However, as a responsible political party, we cannot sit idle while the NDC executes its diabolical plot of preparing the minds of Ghanaians to question the results of the December polls particularly in the most likely event of the NDC losing” it emphasised.

In spite of the raging controversy, the NPP has reiterated its belief that the Commission has the ability and capacity to handle any complaints put before it, as the final arbiter, since according to the party, “in such matters Ghana's courts are also in the position to deliver the right judgement when called upon to do so”.

For the NPP, there was therefore no reason to inflame the political atmosphere.

In his 51st Independence anniversary speech, President Kufuor indicated his resolve to hand to his successor a united and peaceful country.

The President warned that some beautiful countries have been plunged into chaos simply because of a flawed electoral process.

He therefore called on the EC to be a credible referee during the registration, voting, counting and declaration stages of the electoral process.