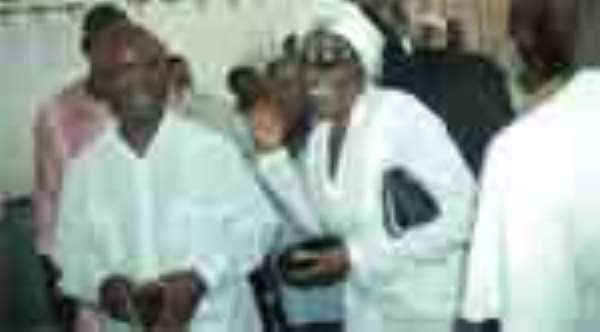 THE HOPES of former First Lady Nana Konadu Agyeman Rawlings to have her trial stopped were dashed for the second time as her application for a stay of proceedings was thrown out by Justice Richard Aquaye, an Accra Fast Track High Court Judge.

Nana Konadu is standing trial with five others for purportedly divesting GIHOC Nsawam Cannery to Caridem Development Company belonging to the 31st December Women's Movement, leading to ¢2.1 billion financial loss to the state.

She wanted a permanent stay of the trial or a stay of proceedings pending the final outcome of a civil suit she had filed against the Divestiture Implementation Committee (DIC) and the Attorney General, Joe Ghartey over the ownership of the cannery.

Her initial application for stay of proceedings for the same reasons was thrown out at an earlier court appearance by Justice Baffoe-Bonnie, now an Appeal Court Judge.

Justice Aquaye stated that he had listened to Mr. Lithur and ingenious as his submissions were, they “did not seem to impress me”.

Explaining further, the judge said he did not share the same opinion with counsel for Konadu that by substituting charges anytime he wanted, the A-G acted in bad faith and was capricious in his dealings with his client.

The judge said once the trial had not begun, the A-G had the right to substitute the charges as and when he deemed it necessary.

On the assertion by Mr. Lithur that the civil suit should have been given priority over the criminal case, the trial judge noted that it was rather criminal proceedings which had precedence over civil suits and consequently dismissed the application.

They have all pleaded not guilty to 15 counts of conspiracy to commit crime, causing financial loss to the state, stealing, causing loss to public property, conspiracy to alter documents and altering of documents.

Earlier in his submission, Mr. Lithur said the A-G as part of the executive arm of Government, was abusing the powers given him under the constitution and only the court had the power to stop him.

Hon. Joe Ghartey on the other hand was of the opinion that to ask the court for stay of proceedings was tantamount to asking it to interfere with the A-G's power granted him under Article 88 of the constitution to initiate criminal proceedings.

He said what the court could do was to ensure that the A-G, in exercising his powers, did not act maliciously or without jurisdiction, which was not so in this case.

Mr. Ghartey, who is also the Member of Parliament for Essikado, said he based the criminal proceedings on a report by the Auditor-General, Edward Dua-Agyeman, who also acted constitutionally, so the accused persons did not have any reason to complain.

According to him, the option was still open for Nana Konadu to return the assets of GIHOC Nsawam Cannery or pay the amount of money involved as he was only performing a lawful duty based on probity and accountability.

Demonstrate diligence and honesty in your work – Outgoing KM...
57 minutes ago