Ghana, NPP And The Future 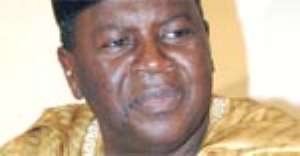 THE NEW Patriotic (NPP) presidential race is a matter that has not failed to capture the attention of every Ghanaian today. It is the most prevailing and burning issue. It concerns non-NPP supporters as much as the many excited NPP supporters.

Far from the 1998 contest that saw J. A. Kufuor emerging leader or any other race this has major differences.

The share number of candidates is replacing the perception of healthy competitive democratic practice with that of an undignified scramble.

The contest takes place at a period when the NPP enjoys unprecedented public goodwill and a sound economy by liberal economic standards. This backed by the prevalent public perception that the economy is on sure economic footing and sound financial management.

The NPP government is also blessed with a tongue tied opposition. The National Democratic Congress, ideologically tied to the acceptance of liberal economic principles is unable to offer any effective criticism of the government.

NON-AKAN
But non of the above conditions can compare in importance with the fact that for the first time a non-Akan is in the fore front of the race and only inches away to win the leadership contest of the Party. This is in the person of Alhaji Aliu Mahama.

The significance of this cannot be ignored. It will be a tribute to the memory of S. B. Domo and the Northern People's Party—the leading opposition party at the time that played a central role for the formation of the United Party (UP).

Things cannot be taken for granted. The NPP goodwill has largely been a Kufuor goodwill; thus with the departure of President Kufuor from the political scene and headlines, the party will really need to think of a new way forward. A new leader must command enormous goodwill from all sections of the country.

This kind of goodwill will be of a different character as it is very clear that ethnic and regional identity will play decisive roles.

Most core NPP supporters share a kind of child-like optimism that will not find a place in the heart of cautious political observer and floating voter of my type. It is important to make some things clear; this is by understanding what will guarantee an NPP victory.

THE ECONOMY
Today the correct opinion is that the economy is on sound footing under the NPP government. Few doubt this.

Whether the 5-6% steady record is accurate or not is insignificant as at what ever margin of error those figures represent a significant economic progress for a country; and both government and opposition spokesperson have conveniently ignored the fact the most significant contributor to that growth figure is the extractive industry. This could represent nothing more than a short term economic boom.

On this same issue of economic management, inflation has been kept on acceptable limits despite rising fuel prices. Looking back at the inflation figures of the year 1999 and 2000, it seems obvious that the NPP has not done really badly. But the question is will NPP be able to retain power?

TRIBAL ISSUES
It is important to understand that tribal issues have a great influence in electoral choices. This cannot be denied. The fact remains that all southern candidates choose northern candidates as running mates in all the political parties.

This is open recognition that tribal and regional tendencies have a decisive role in the fortunes of a political party.

This is even much more so in the case of the NPP. It begun with the narrow and unjustifiably useless clamour of ethnic balance for a Fante candidate; this is followed by an extraordinary and dubious claim to Fante ancestry by a prominent aspirant in order to avoid the accusation of Asante dominance and to outwit the rival Akyem power circle.

To me and many non-Akan voters who have some sympathy for the NPP regime, we only see in Asante, Akyem, Akwapim, Fante or Bono, a single Akan identity. If properly considered, the clamour for intra-Akan tribal balance should have a logic that justifies a broader national regional balance.

This point should be made. What has kept a great number of Ghanaians in faith with the New Patriotic Party government? Or better, what condition will guarantee its power for another four year term.

The shocking and embarrassing defeat of the John Howard and the Liberal Party in the general elections in Australia clearly shows that the economic achievements alone have no direct relation with electoral victory. In deed, eleven years of the Howard and Liberal party rule had strengthened the Australian economy.

Howard in accepting defeat stated that he has handing over a country, far richer and stronger than it was eleven year ago.

It can be feared that the NPP might be doing the same: handing over a Ghana better than it was eight years ago back to the NDC. The reason is clear.

Politics has much to do with intangible elements such as opinions, perceptions and identity. What had kept my loyalty for the NPP has been my hope that it opens itself to all non-Akan persons.

NON-AKAN FOLLOWERS
The candidature of Aliu Mahama provides the greatest opportunity for an NPP victory; and it will give all non-Akan followers a reason to feel proud of the party. This sentiment is being expressed all over in the country.

The longest serving Vice-President cannot be just thrown off; it is welcoming to hear that he is on top of the race. It follows the tradition of succession known throughout the world.

CONCLUSION
Given the high number of aspirants, post-December party unity must be well factored; this must express itself in electing a candidate who is at peace with all sections of the party. This is another area that makes an Aliu choice paramount to party cohesion.

Above all Alhaji Aliu has proven to be a competent leader and respectable statesman and must be allowed to succeed his boss.

But this is for the delegates to decide; but delegates must bear one fact in mind: they will be deciding between two and not eighteen candidates: Alhaji Aliu Mahama and Prof. John Evans Atta-Mills.

Under the present conditions no Akan candidate can command the necessary votes in the non-Akan areas to neutralize the strength of the National Democratic Congress.

Aliu and Mills having served as vice-presidents are the highest representatives of the Kufuor and Rawlings legacies which will be the summit of the 2008 general elections.

For me and many millions of Ghanaians it will provide the most convincing reason to give the New Patriotic Party a third trial.

Sensitize School Children On Wearing Face Masks Before And A...
45 minutes ago