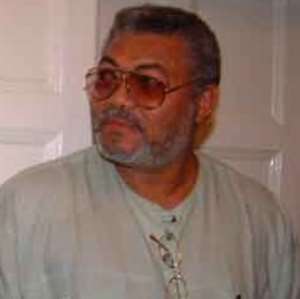 Family, let me crave your indulgence for once. I know much has been said and written about the June 4th, 1979, coup and you would be right to assume we must move on to more important matters, such as the energy crisis. For such, you could be excused to stop right here and switch to other topics. For those looking for sober reflections you are welcomed to continue.

The often served menu, when it comes to June 4th, 1979 coup, is that it was a broomstick revolution. There are those who would invoke providence and say it was a divine intervention, come to cleanse and clean Ghana; and what better way than it was led by a white lamb in the person of Flt Lt Jeremiah Rawlings John, and his black enabler, Capt. Boakye Gyan? Varied reasons and claims given to justify the coup include: to eradicate corruption; to punish all those who had taken part in overthrowing constitutionally elected civilian administrations; and to purge the military of serial chronic coup bouts.

Perhaps it won't be a bad idea to revisit, briefly, the political and social conditions that existed which provided the fertile grounds for the coup. Then at the time we had a military government under the banner, Supreme Military Council, chaired by Gen. F.W.K. Akuffo. He had come about via a palace coup that ousted the Acheampong regime which previously ousted a civilian Busia regime. What necessitated the Acheampong ouster could largely be attributed to his faux pas regarding his Union Government formula, which the people rightly renounced as a rouse of the unelectable military to become a permanent fourth wheel in governance besides, the executive, legislature and the judiciary. Kalabule was the norm and life was basically tough and rough. To get ahead of the rising tide of civilian malcontents, the Akuffo SMC II government had hurriedly initiated moves to return the country to civilian rule. The soldier-man could not stand the heat in the kitchen anymore. Public opinion of the military had sunk to an all time low. Under the circumstances Ghana had become akin to a fetus looking for a surrogate belly to lodge in or an accident waiting to happen. And accident, it happened, when barely 20days after his capture at a failed coup attempt, a group of low rank soldiers broke into the prison cell of JJ Rawlings and put him ahead of an insurrection of their own to get their pound of flesh.

One has to revisit the pronouncements of the key players at the time with the benefit of hind sight to really pass objective comments on what happened on that fateful day. Yours truly, was just a tiny minnow, an upper sixth former, bent on crunching and munching volumes on Government, Economics and Geography at T.I. Ahmadiyya Secondary School (AMASS), Kumasi. I recall my first reaction was nothing sort of nationalistic. My first reaction was: "What the heck is that. Now I guess we wouldn't have the peace of mind to write our A' Level exams", ….which I was then feverishly brainstorming myself to go through to university. Again we were scheduled to hold elections in July and I had gotten myself wrapped up with Ackah Blay Miezah's T-shirts, embossed with some colorful butterflies. I loved the high quality T-shirts not the political shout-outs of the man himself. I was in no mood for any wanton distraction and disturbances on the national scene. I had a very important task at hand, and no coup could justify any interruption whatsoever. True to my fears, some friends lost their lives when we were forced to put our June exams on hold and go and haul cocoa from the villages.

Again we were sooner caught up with waves of revolutionary "witch-hunts" that was sweeping across our nation. No where, and I was avidly attuned to what was going on in the media; no where was it ever mentioned by the coup makers that their main reason for the coup was to have come, punish, and hold to account those senior officers who had been part of previous coups to overthrow constitutionally elected civilian governments. If that was the case what was the reason for the flopping of our defenseless mothers and sisters and the pulling down of Makola market by soldiers? Again if that was the case, I find it difficult to comprehend why Rawlings would have had the nerve to come back again in December 31st, 1981, to overthrow the Limann PNP government, knowing very well that he had been part of a coup that killed others for staging other coups in the past to overthrow civilian regimes?. But this is the position of Boakye Gyan and Ansah Atiemo. I guess you can write that claim off as an after thought, calculated to throw dust into the eyes of the uninitiated.

Then there is also the Rawlings often mentioned reasons for the coup: to cleanse the country of corruption. Of the lot he is the one who has been fairly consistent in his excuse for the coup, speed staged for his benefit and rush delivery, and not by him, per se. But then one has to take up what he said on various platforms and compare it with what he did or enabled on the ground. I cannot forget the chilling and traumatizing effect of the brutal torture and murder of a popular Kumasi based evangelist, Odeyifo Asare, at Kumasi Kejetia roundabout. For days his bullet riddled body was dumped at this greatest of crossroads in Ghana for all to come, watch and be intimidated. This was actually preceded by days of intense man hunting and searching of passenger cars, buses, and taxis leaving the Kumasi metropolis. Any useless drunk induced soldier-man appointed himself the lord of all to subject just about anybody to brutal assault under the guise of revolutionary putsch. But then as days passed by it began to dawn on discerning and observing citizens that the coup's intention was skewed towards pay backs, victimization, vandalization, confiscations, torture and murder of the business class, most of whom where Akans, and most of the drunken fools doing the caning and beatings were non-Akans. Ghana was tethering on explosive civil and tribal war and that was the reason for the sigh of relief that engulfed the nation when the Abongo boys returned to the barracks.

Just take a sample pool of the comments on Ghanaweb forum and you would not miss the fact that we are living with the consequences of that abominable coup. It sowed the seeds of tribalism and distrust amongst the citizenry and we are still reaping the results. The people who were shouting out the most, at the top of their lungs, "let the blood flow" often under the influence of akpeteshie were not Akans, and the people whose blood they were thirsting and clamoring for were not their brethren, but the Akans, who they have wrongly assumed as the Haves in Ghana, and they, the Have-nots. So it was. Thank God we came off that era, without plunging our country further down the tubs. Rawlings and his ilk are the people who entrenched the specter of tribalism in our society, but he won't own up to it. When did he ever own up to anything, anyway?

We have to dismiss the often trump up card to fool others that the June 4th coup did not entrench tribalism in Ghana, for Rawlings was himself married to an Akan woman. We only have to remind ourselves that Adolf Hitler's pedigree and ancestry included Jewish blood. For let us ask ourselves, if the coup was to punish previous coup makers, how come of the lot who were part of the NLC regime, only Afrifa was singled out, picked up and summarily executed without any fair and decent trial, whereas J.W.K. Harley, Commissioner of Police, B.A. Yakubu, Deputy Commissioner of Police, Colonel A.K. Ocran, J.E.O. Nunoo, Assistant Commissioner of Police, and A.K. Deku, Deputy Commissioner of Police were left out, Ankrah and Kotoka having passed away at the time of the coup? Then let's saunter to Acheampong's demise. Acheampong's NRC military coup and junta originally consisted of Brigadier N.Y.R. Ashley Larsen, Chief of Defense Staff, Colonel E.A, Erskine, Army Commander, Commodore, Major A.H. Selormey, Major R.M. Baah, Major K.B. Agbo and Mr. J.H. Cobbina, Inspector General of Police. Of this group only Acheampong was executed. FWK Akuffo could not be said to have staged any coup to overthrow any civilian government, and by the time he launched his palace coup, none of the original members of the NRC, were still in the SMCI. Rather Akuffo and his men could be said to be the ones who had taken steps to return the country to civilian rule, yet he and others in the SMCII were killed by Rawlings and his gang.

Could it be said those who pressed for the execution of Afrifa, Acheampong and Akuffo had other reasons other than the stated ones to single them out? Could it be said the shadowy hands of Capt. Boakye Gyan and Rawlings were linked up to the rumors that Osei Poku, who together with Arthur killed Kotoka, was a relative or uncle of Boakye Gyan? Or more so Rawlings yielded to Afrifa's execution because despite the facts to the contrary, the rumor still persisted among some uninformed Ewes that Afrifa engineered through the backdoor to get Kotoka killed so that he could become the chairman of the NLC?

Posterity would judge the midwives and progenitors of June 4th coup as the ones that sowed the seeds of tribalism and mistrust amongst Ghanaians. They would be alas be seen as people who only see the wrongs of others but not theirs, and do not take responsibility for the consequences of their action. That they accuse others of crimes which they themselves harbor the ambition to become and supplant. If you want proof, check Rawlings of June 3rd. 1979, against the Rawlings of June 4th, 2007. You would think you are in a state of permanent surreal and disbelief. Now he fathered, founded and owned a political party to keep the aluta on a permanent roll. Why else we should not be excused to assume GAF stands for Ghana Armed Robbers and not Forces? What types of corruption did June 4th, 1979 come to eradicate that we still don't have today? Why would Rawlings come again on the second time, if the reason for the first one was to kill all those military officers for overthrowing civilian regimes? Again if Acheampong was wrong for wanting to be permanently in our politics, a la Union Government, what rational do we give to justify Rawlings 19 years rule and his P/NDC? A little birdie told me, conmen come in many fabrics; in army fatigues and civilian clothes. Don't believe what they tell you. At the end of the day it was a quintessential Machiavelli scam. Rawlings and Boakye Gyan wanted everything the Afrifas, Acheampongs, and Akuffos have and more. They just weren't bold about the truth and you fell for it.