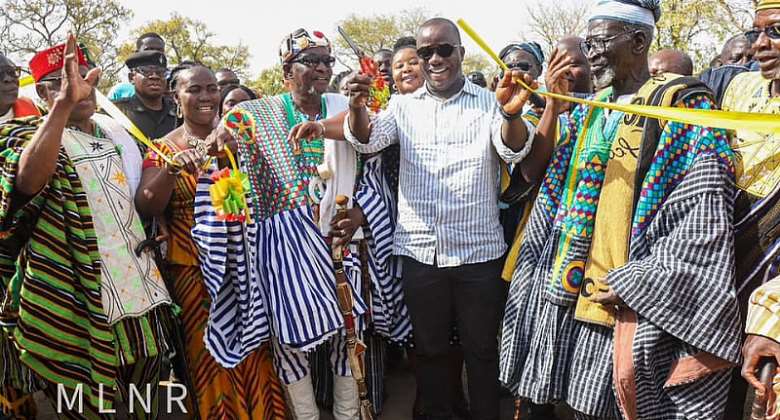 The Minister for Lands and Natural Resources, Mr Samuel A. Jinapor has launched the Upper East Region's first Community Mining Scheme (CMS) on Tuesday in Bongo-Soe.

Speaking at the ceremony, he indicated that the northern part of the country has a wealth of mineral deposits.

He cited the presence of mining companies such as Cardinal Namdini Resources and Perseus Mining, among others, as evidence that the northern part of the country was endowed with mineral resources, particularly gold.

He emphasized the importance of correcting historical mistakes by ensuring responsible and sustainable resource exploitation.

According to the minister, the government was committed to revitalizing the mining sector and nurturing local giants in the small-scale mining industry and the Community Mining Scheme was an excellent way to do so.

He hoped that the Community Mining Scheme would create jobs and improve the livelihoods of people in the area.

Mr Jinapor indicated that the Community Mining Scheme has a manual that should be followed religiously, adding that the Ministry would not hesitate to revoke the license of CMS if they fail to follow the measures stipulated in the manual.

He urged the Scheme's management to collaborate with stakeholders, including the DCE and traditional authorities, to ensure that the companies pay royalties, create jobs and engage in corporate social responsibility programmes in the communities they operate.

The Upper East Regional Minister, Stephen Yakubu, expressed his delight that the job creation project had been launched in his region.

He assured that the CMS manual would be implemented and he urged the youth to commit to the project's success.

He also stated that the government-donated gold katcha would be used for its intended purpose.

The Paramount Chief of Bongo Traditional Area, Naba Baba Salifu Atamaale, on his part expressed optimism that the scheme would create jobs in the region and he would also ensure that the scheme abides by the country’s community mining laws.