The sacking of 8 SHS girls for slandering the President: Examining the missing father equation 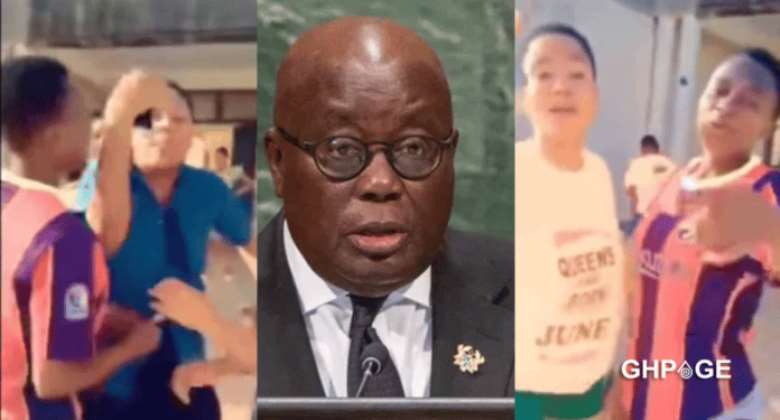 A story as read on gbcghanaonline headlined '8 Chiana SHS students who slandered President Akufo-Addo dismissed'. The story read in part "Eight female students of the Chiana Senior High School in the Upper East Region who were caught on video allegedly insulting President Akufo-Addo have been dismissed, according to the Ghana Education Service (Okyere, 2023)".

The videotape which went viral in November 2022 which I had a copy and shared same on mine fatherhood page "Beyond Fatherhood" on Facebook. The viral video caused agitations on social media and also questioned indiscipline in schools which lead to the identified students being suspended.

Yesterday, 12th January, 2023, the Ghana Education Service (GES) announced that "Its investigation into the incident established that the said students used words of vulgarity against the President of the Republic, further describing the actions of the students as “very undesirable, and contrary to the acceptable standards of the conduct generally required of any student in Ghana’s educational system (Okyere, 2023)”.

By virtue of this, the 8 girls have all been dismissed for such an action. This has generated a lot of consternation and debate as to the propriety of the action of GES vis-a-vis the rights of the 8 girls to education. The rights issue even though important isn't my focus for now but, how did we get here is my primary focus.

The Bible says in Proverbs 22:6 "Train up a child in the way he should go, And when he is old he will not depart from it". This dictum is well known and an accepted cliché. How have these girls been trained by their fathers, society and the school itself to be able to muster courage to insult the first gentleman of the land and to record same in a video? Indeed, the uncultured tone and the gestures these 8 girls used in denigrating the President in the viral video is even more sickening.

This demonstrates palpable failure on the part of all of us as fathers including our president who has unfortunately been slandered disrespectfully by these uncouth girls. In this beautiful country of ours, people insult our presidents with reckless abandon and nothing happens to them. Social media has made such debauched habits even more popular and the use of intemperate language has gained currency and has become fashionable. What have we done as fathers or what laws have the powers that be enacted to control how we use social media or how we insulate our leaders or elders in general from such verbal attacks?

To support my position that fathers have failed in shaping the moral fabric of our society, I reference an article published on 11th September, 2019 on peacefmonline titled "Rawlings, Akufo-Addo Biggest Victims Of Politics Of Insults - Prof. Karikari". In the said article he was quoted to have said among others "In my estimation, the two people who have fallen victim to this kind of thing (insults) most profoundly are Jerry John Rawlings and Nana Akufo-Addo. They have been the biggest victims of political insults”. Which people engage in such insults?

The former Executive Director of the Media Foundation for West Africa (MFWA) added “…Of course the biggest politically insulted personality has always been Kwame Nkrumah, but in our time these two people (Rawlings and Nana Akufo Addo?) have had the worst of the political communication that has been in the airwaves for some time.”

From the above, it goes to show that we are and have become a people who have lost our way and culture. Indeed, if the first president of our land is the most slandered in our history and in the fourth republic, Nana Akufo-Addo and J. J. Rawlings are, then fathers have failed in standing up to be countered. "The most insulted and sabotaged President in the contemporary history of Ghana" is a title for an article written and published by Rockson Adofo on modernghana.com in 2021. In the said article, Nana Addo-Dankwah Akufo Addo, the current president, was the victim.

In trying to put together this write up, news broke out that, the president has pardoned the 8 girls and the Ministry has directed GES to allow the girls to go back to school. That to me as a Fatherhood Advocate, is commendable because according to the GES report all the 8 girls are second year students of the Chiana Senior High School, putting their maximum age, in my estimation at about 17, thus being minors.

All these funfair associated with the 8 Chiana Senior High School girls are needless. The state should be at the forefront in instilling moral discipline into our schools and that should be a matter of deliberate policy. Our country by now should be thinking about how to enact laws that insulate our presidents and or our leaders from unnecessary public opprobrium and ridicule.

Fathers have failed miserably because Senior High School students aren't allowed to take phones to school. How were the girls able to record the video and with whose phone? How come the teachers in the school have failed to be doing thorough search in order to seize such gadgets? Who bought such phones for the girls (their fathers, sugar daddies, boyfriends)?

In Ghana's 8th parliament, there are only 40 women MP's out of the total 275. That is about 11%. In the Executive arm and Judiciary, males dominate. Thus, if things go awry, as Fatherhood Advocate, I'm tempted to blame fathers for failing to address such challenges.

In sum, let all fathers bow down their heads in shame for the despicable level of moral decay our society has sunk into. Traditional leaders, academicians, politicians and the clergy have all failed our motherland. For minors to muster such courage and blatantly malign our president when they knew it was being recorded, is a reflection of our society. The absurd show of bravado by these girls in the video, is in itself stupendous.

I thank the president for vetoing the decision of GES' sacking of the 8 girls, but, apart from that public show of sympathy he should be seen to be putting in place policies, programmes and laws to promote our culture which develops our moral ethos.

If we all agree that there is moral decay especially among the youth, then, the time to act is now and men (fathers) must lead the charge.