How to impeach a president: Ramaphosa case puts new rules to the test in South Africa

By Richard Calland - The Conversation
Article 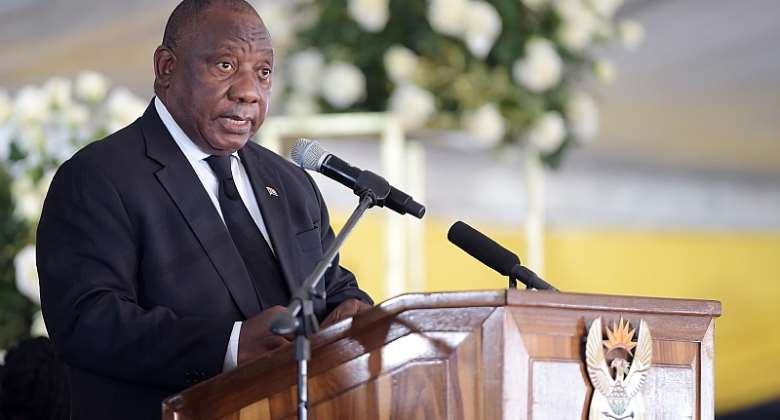 South Africa's President Cyril Ramaphosa faces possible impeachment in the country's parliament over the illegal stashing of thousands of US dollars at his farm in 2020 . This is not the first time there's been a threat of impeachment of a president in post-democratic South Africa. His scandal-prone predecessor, Jacob Zuma, survived an impeachment vote in 2017 over the illegal use of public money to renovate his private residence. There is, however, a difference in the process being followed this time. It is the first since parliament adopted rules to guide the process for the impeachment of a president in 2018, following a Constitutional Court judgment . Richard Calland explains.

This is the first time a process of a motion being tabled and an independent panel being established has been used. That alone makes it a very significant moment. How the panel interprets and then applies “the law” will set an important precedent. It may be subject to judicial review, especially if the panel finds that there is insufficient evidence for the impeachment process to proceed to a full parliamentary inquiry.

The process is triggered when a party with parliamentary representation tables a motion in the National Assembly requesting impeachment.

In this instance, this was done by a small party with only two seats , the African Transformation Movement ( ATM ), in terms of section 89 of the constitution .

Section 89 is one of two parliamentary routes by which a sitting president (or their government) can be removed from office. The other is in terms of section 102 of the constitution, which is a vote of no confidence – a purely political, and, therefore, subjective matter. Several such motions of no confidence were tabled against Jacob Zuma, but he survived them all, as the ruling African National Congress whip held the line.

Section 89 contains three specific grounds for “impeachment” (although the section does not use the word). The National Assembly may remove the president from office (with a supporting vote of at least two thirds of its members), only when the president:

has committed a serious violation of the constitution or law

or suffers from an inability to perform the functions of office.

The fact that this is a parliamentary process, triggered by a particular section 89 motion, and that it requires an objective test to be met, is of very great significance because it requires that an evidence-based finding be made in relation to one or other of the three grounds.

The new rules now provide for a two-stage process to establish whether such evidence exists to justify the removal of the president from office.

The first step is that after the motion has been tabled in parliament, the National Assembly must set up a panel to conduct a “preliminary enquiry relating to a motion proposing a section 89 enquiry.”

The underlying purpose of the panel is to prevent spurious or vexatious impeachment attempts to proceed without any proper evidential basis.

Accordingly, the panel must be composed of “three fit and proper, competent, experienced and respected South Africans, which may include a judge, and who collectively possess the necessary legal competence and experience.”

Parties represented in parliament can nominate people to serve on the panel, whereafter the Speaker of the National Assembly makes the appointment. In this case, the Speaker has appointed former Chief Justice Sandile Ngcobo as the chair.

The motion tabled by the African Transformation Movement seeking Ramaphosa's impeachment, as leading law reporter Franny Rabkin has pointed out , provides tramlines within which the panel must stay when performing its mandate. This limits the evidence and the allegations that the panel is authorised to consider.

The motion is relatively limited in its target area. It confines itself to the specifics of the mysterious theft of money at Ramaphosa's Phala Phala farm, and his immediate response to the theft.

Hence, Ngcobo is likely to be fastidious with regard to confining the panel's deliberations. Any evidence or allegation relating to a matter not rooted in the original motion is likely to be disregarded.

The panel's overriding legal responsibility is not to determine whether there is a “prima facie” case – meaning that “at face value” there would appear to be a case to answer. Rather, it is whether there is “sufficient evidence” of one or other of the three grounds for removal from office set out in section 89.

In this case, the third ground – incapacity – does not arise. Instead, the question for the panel is whether there is sufficient evidence of serious misconduct or a serious violation of the law.

The word “serious” here is very significant. If Ramaphosa has broken the law or behaved inappropriately or unwisely in his response to the theft, that will not be enough to meet the test, unless it is “serious”.

It seems to me that the test of “sufficient evidence” is a subtle but qualitatively higher one than “prima facie”, because the panel is required to consider the evidence presented by the African Transformation Movement and then the president's response, and to make a finding.

In turn, this means that the chair of the panel and his two colleagues face a rather tricky task because the rules place severe limits on the scope of their investigation.

What the rules say is “in considering the matter” the panel

may, in its sole discretion, afford any member an opportunity to place relevant written or recorded information before it within a specific timeframe.

It is clear that the panel has done this, and that the African Transformation Movement, at least, has responded by placing what they claim is further evidence before the panel. But unless it is relevant to the motion, and falls within the tramlines that it set, the other, extraneous evidence will and should be disregarded by the panel.

Having sought evidence from members of parliament – this being a parliamentary process – the panel has also been required to give the president an opportunity to respond. This may explain the delay in the panel concluding its work and the need for a two week extension to 30 November .

After that date, parliament has rightly postponed rising for the year so that the panel's report can be debated in early December.

The report is required to make findings and provide reasons for its conclusion, but it can only do so based on the written evidence adduced before it.

Given the threshold test that the rules establish for the performance of its mandate, it is more likely than not that the panel will determine that there is not sufficient evidence.

Even then, the words the panel uses will be weighed heavily in the balance politically. At the very least, a lot more information is going to be in the public domain about the curious events of that February night in 2020 at the president's farm, and how he handled the matter.

It could have enormous implications, not just for Ramaphosa's immediate political future and as well as his long-term legacy, but for constitutional accountability in South Africa.

Richard Calland is employed by the University of Cape Town, is a member of the Advisory Council for the Council for the Advancement of the South African Constitution, and is a partner in political risk consultancy The Paternoster Group.