Must the Council of State be Scrapped? 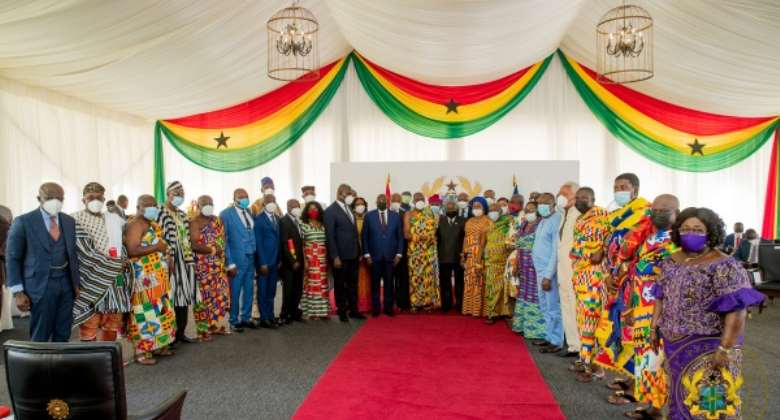 Ghana's Council of State as an advisory body is composed of eminent citizens that deliberate on matters of national concern and counsel the President on such affairs in the performance of his functions. Some of the members on the Council are directly appointed by the President to advise him while others are elected – the representatives from the regions.

The structure of the Council makes it an impartial advisory unit that must focus on addressing national development challenges without political prejudices. But there are reasons to doubt the impartiality of the Council, because the people that are appointed by the President may be party enthusiasts. The regional representatives may not have the disposition to be fair in their advisory decisions because they may not be party faithfuls of the ruling party: the partisan nature of the politics of Ghana manifests at every level.

Thus, the effectiveness of this advisory unit is weakened because decisions of the Cabinet of the President may override the advisories of the Council. The Council of State, as it happens, is required to meet four times a year, as stated in Article 92(1). It can also meet if requested by the President of Ghana, the Parliament of Ghana or by at least five sitting members of the council. The number of times for its meetings raises critical questions about its effectiveness and efficiency. The President performs his functions daily and may need pieces of advice on some of his routine roles. That does not mean the Council needs to meet daily.

This way, the mission of the Council of offering credible, impartial and timely advice to the President of the Republic, Ministers of State, Parliament and other Public Agencies to ensure responsible and accountable Governance is not relevant and attainable.

But these challenges do not put a demand on Ghana to scrap this unit. It appears the Council of State is not being used appropriately to achieve the ideals of the Constitution of eliminating partisanship at every level of the development of Ghana. The Council of State may serve the interest of the majority of Ghanaians who are not directly involved in governance issues. It is also suitable for entrenching the spirit of national cohesion and patriotism: the members come from different political ideologies and orientations to collaborate with one another in proposing development ideas to the President, Parliament and other state agencies.

Therefore, the country needs to refine the structure of the Council of State and the statutes that regulate it. The recommendations and proposals of this advisory unit must be binding on some of the authorities or agencies it advises with some exceptions to the President and the Parliament of Ghana.

It is reported that former President John Agyekum Kufuor stressed at a Seminar on Reviewing Ghana’s 1992 Constitution, organised by the Institute of Economic Affairs (IEA), that a second chamber should be composed to focus more on experiences than democracy. This was made to back his call for the scrapping of the Council of State. He believes the present times and the relevance of the Council of State no longer seem to align.

In agreeing with him regarding the inappropriateness of the Council of State presently, I think the composition of a second chamber is not immediately relevant too. A second chamber will have the same characteristics of deepened partisanship and polarization because the new unit may be constituted by the President or a governmental institution. A second chamber, depending on how it is structured, may demand election of persons or appointments which might not solve the challenges with the current system.

The current system needs to be fine-tuned by eliminating the elections of the regional representatives and focusing on selecting experience statesmen from each of the regions without recourse to their political affiliations. The Council of State requires the use of more experience people who have the integrity and willingness to withstand political prejudices. The entire structure of the Council of State must be rewired to fit into developing an impartial institution capable of proposing acceptable development solutions in executing its Mission.