A Psychologist Tells Atiku To Endorse Obi For The Sake Of God And Country, And Here's Why 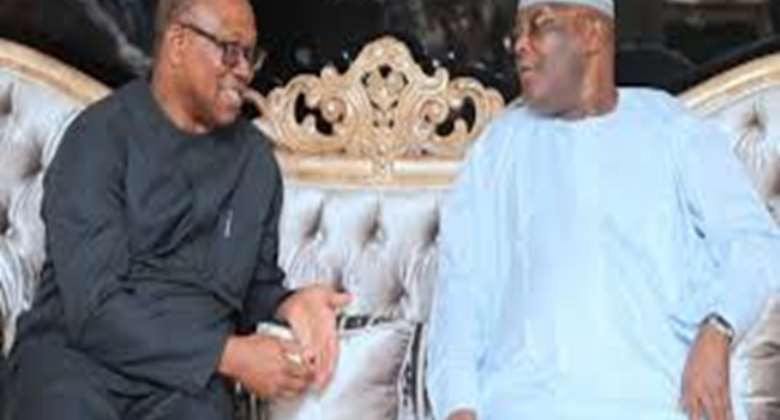 Alhaji Atiku Abubakar as the presidential candidate of the People’s Democratic Party (PDP), it is looking too late now for any final fence-mending session between you and the anti-Atiku candidacy, a situation that has made the inner battle within the Peoples Democratic Party (PDP) difficult to overcome by you or your current in-house political enemies.

At least five irritated governors, some southern chieftains of the Peoples Democratic Party, which include Governors Nyesom Wike of Rivers State, Seyi Makinde (Oyo State), Okezie Ikpeazu (Abia State), Ifeanyi Ugwuanyi (Enugu State) and Samuel Ortom (Benue State), have openly poisoned your 2023 presidential election bid. The current disunity among the factions within the ranks of the party could make your candidacy irreparably troubled.

There are just a few weeks left before the election. To think there is going to be a genuine conversation about reconciliation is just a fantasy.

Mr. Atiku, this isn't just about your personality clashes with Wike; it's a full-fledged philosophical war in which you, as a Northerner, want to preside over the nation as a PDP presidential representative, while your other party faction sees it as unfair to the nation's southern geopolitical zone.

Don’t run on divine wishes as the intractable crisis confronting PDP ahead of the 2023 general elections is enmeshed in the instrumentality of lack of godliness on your part to see the fairness of power shift to the South. That is the operating perception in Nigeria.

Unfortunately for you, while the Governor of Edo State, Godwin Obaseki, appears to be on your side, the infighting between those who defected with him from the All Progressives Congress (APC) to the Peoples Democratic Party (PDP) and the original party members in Edo State only makes you weaker.

The lone south-south state, speaking of Delta State, under the governorship of your Vice-Presidential Candidate, Ifeanyi Okowa, lacks the complete show of strength to save you.

In the Middle Belt of Nigeria, Governor Samuel Ortom of Benue State has left you as the presidential candidate of the Peoples Democratic Party.

The current APC government in power, whose presidential candidate, Asiwaju Bola Tinubu, has all-round support from all northern and southern factions with Buhari, has a psychological distance from you because they have painted you to Nigerians as a Cameroonian, not a citizen of Nigeria, even when this is an exaggeration of facts. That means you should not be running in any Nigerian presidential election.

Mr. Atiku you recently gave a political shot yourself when you said this, "What the average Northerner needs is somebody who’s from the North and also understands that part of the country and has been able to build bridges across the country. This is what the Northerner needs. It doesn’t need a Yoruba or Igbo candidate. I stand before you as a pan-Nigerian of Northern origin."

This was a terrible national shame on your part, especially when it pertains to the people of the South-East the only zone in recent Nigeria yet to take its turn at the Presidency.

In an apparent subconscious manner, Governor Obaseki, a recent runaway politician to the PDP, in an apparent subconscious manner, although he continues to fluctuate, said, "I don’t know whether you have them in your house. Just ask them, ‘which party are you?’; they will say ‘Obidients’; you understand. They do not want us; they are not talking about PDP or APC. They are looking for alternatives, and there are many. You see all of them queuing for their PVCs now. They are not looking at the direction of the PDP or APC now. They are looking for alternatives. "

Then, as part of his apparent subconscious distractions and uncertainties, nervous about the dying political fate of PDP's win, Obaseki just said, "God forbid, but should APC win and come to power in 2023, this country will break. APC has done much damage to this country... "

So, Mr. Atiku, looking at all these interconnected adverse factors around your person and candidacy, the odds are against you.

Your only chance of winning is if the ruling All Progressives Congress (APC) Presidential candidate, Asiwaju Bola Tinubu, becomes incapacitated or dies, which I hope does not happen, but even if it does, the entire Nigerian people see the APC and President Muhammadu Buhari as a complete economic, political, and legal disaster to the country, who has harmed the little democracy that was growing in Nigeria.

Mr. Atiku, many Nigerians have no doubt that you are a good man and have served your country in different ways in public service, but the political will of the nation, except for a few ethnic men and women, is not on your side. I know you love this young nation called Nigeria. If so, what do you have to lose by directly or indirectly patronizing the new collective voice of the people, we are talking about Peter Obi. Sir, this is the time to be on the right side of history. Show it boldly.

Unlike Obaseki, Mr. Atiku, do not allow Nigeria's democracy to collapse through any means. You helped plant the initial seeds of democracy in Nigeria in 1999. As you can see, under Muhammadu Buhari, many Nigerians believe that the political rights and civil liberties around the country have greatly deteriorated to their lowest point. Nigeria's democracy is at a dangerous inflection point. Obi is not perfect, but you will agree that he remains an ideal president for Nigeria. In fact, he is your political heir.

Mr. Atiku, Except for the presidency, God has long blessed you; but where the people have chosen to make Obi serve this country, you sir, can, in good faith, make it happen; and this you can do in the coming days and weeks; if you do, you will be fighting for a better, fairer, and brighter future for every Nigerian.