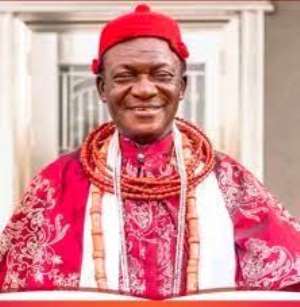 Key families in Okere-Urhobo on Monday took steps to foil the divisive and land grabbing plan of one Louis Okumagba.

They also urged the good people of Delta State and the general public to completely discountenance the false publication by Louis Okumagba.

Heads and members of the Olodi, Oki and Ighogbadu families of Okere-Urhobo of Warri South spoke on prejudices of some local and foreign publishers on the land opposite Don Domingo College, Warri Monday morning.

Chief Gideon Okumagba, a representative of the three families, read the statement of the royal families aloud to newsmen.

The families accused Louis Okumagba of distortion and inciting fear in Delta State.

“The families of Olodi, Oki and Ighogbadu collectively owned landed properties in Warri.”

The Okere-Urhobo leaders said the land was acquired by the defunct Bendel State Government.

“The families are represented by Heads of the Kindred family and are the original owners of the land until it was acquired by the then Bendel State Government. The families currently have their administrative office at No 60 Okumagba Avenue Warri where they meet frequently to deal with issues. on family lands and other related family matters.”

They offered an itemized and caustic indictment of Louis Okumagba’s behavior in Warri South.

“As one of the elders in the family, specifically as related to the false claims by Louis Okumagba, I am well abreast of the issues raised in that publication. The good people of Warri are not in any war or in a battle over the landed property opposite Don Domingo College, Warri, and it is very shameful that the said Louis is trying to incite tribal/ethnic battle in that publication.”

They promised to file a libel suit against individuals and organizations publishing Louis Okumagba’s false narrative.

“It is not true that the Alema of Warri Kingdom, High Chief Emmanuel Oritsejolomi Uduaghan, used officials of the Delta State Government to intimidate and arrest Louis Okumagba. To be candid, it was Chief Gideon Okumagba that reported his criminal extortion of money from developers to the Police Area Commander Office in Warri.”

The statement emphasized how the matter was dragged to the office of the Inspector General of Police Abuja.

“While the case was being deliberated on in Abuja, Louis Okumagba jumped bail and hurriedly filed a fundamental Human Rights Application against me, the Inspector General of Police and Chief Emmanuel Oritsejolomi Uduaghan at Warri High Court just to shield himself from being prosecuted for his criminal act. I equally filed a Counter application in that case and at the end the Judgment was resolved in my favour while his Fundamental Human Rights Application was dismissed with cost. Louis has been a fugitive. Since that judgment, he has not been seen within Warri.”

Particularly, the families accused Louis Okumagba of trying to sow discord amongst Deltans through falsehood.

“Louis Okumagba claimed that he has been in the forefront of the land in dispute is false and misrepresentation of facts. And the alleged grabbing of over 30 hectares of land by the Okowa Government led by High Chief Emmanuel Oritsejolomi Uduaghan is equally false. The land was acquired by the then Bendel state for public purposes. The Delta State government has since done the needful by releasing/returning parts of the land to the Olodi, Oki and lghogbadu families who are the rightful owners. 4.6 hectares of land was released to the family on the 26 day of June 1988 and another part of the unused land was released to the Olodi,. Oki and 1ghogbadu families on the 14 of January 2000. Also, the Olodi, Oki and Ighogbadu families have an agreement with the Government of Delta State over the remaining parts of the land.”

The families told news men there was zero evidence for Louis Okumagba claims of land grabbing.

They scolded Louis Okumagba for rendering a real disservice.

“There was never any consultation by Louis Okumagba with the well-known families of Olodi, Oki and Ighogbadu before that Publication was made by him. It’s a futile attempt to incite the Urhobo and Itsekiri into a needless bickering. There is no dispute as far as the land in this narrative is concerned. The said Louis should avail himself to enable the police conclude their investigation in the crime levied against him. The land in question belongs to the Olodi, Oki and lghogbadu families of Okere-Urhobo and he should stop spreading false claims and division among the families and tribes in Delta State. If there are disputes in any land owned by these families, it is the heads and members of the family who will collectively decide to institute an action in court.”

Last week, the families condemned the role of Chief Louis Okumagba in the 30 plots released to the Olodi, Oki and Ighogbadu families of Warri in the Okere – Urhobo kingdom of Delta State.

They described it as a negative development and a minus for peace and development in Delta State.

In a letter titled, “Attempt / efforts to cause communal war, fanning embers of communal dispute, conduct likely to cause breach of peace and criminal defamation of characters of our clients; Olodi, Oki and Ighogbadu families of Warri in the Okere – Urhobo kingdom of Delta State, all committed by Mr. Louis Okumagba – a call to investigate the allegation herein, the families urged the Inspector General of Police to use his good office to investigate allegations against Louis Okumagba, so as to prevent a monumental communal war/crisis between Itsekiri and the Urhobo of Okere Urhobo Kingdom.

“God forbid a repetition of what happened in 1997/98 in Okere-Urhobo Kingdom.”

Counsel to the Olodi, Oki and Ighogbadu families of Warri in the Okere – Urhobo Kingdom, L O. Egboyi & CO said in 1974/76, the then government acquired a part or portion of our client’s land for public purpose.

“In 2017, the Delta State government gave part of this acquired land to Messrs. Seriviri Nig. Ltd. for the purpose of partnership (Leisure Park) with the state government, covered by a certificate of Occupancy. Considering the size of the land given to Seriviri Nig. Ltd, for the partnership, it could not utilize the entire land. So, it entered into agreement with our client family, wherein, it released 30 plots thereof back to the family – our clients.”

The Olodi, Oki and Ighogbadu families of Warri are made up of the popular Okumagba family of Warri, Okere- Urhobo kingdom.

“Our clients are the owners of all the land in the entire Okere-Urhobo kingdom Warri. Certain Mr. Louis Okumagba who is the black sheep of the family started to foment trouble, disturbing and threatening Seriviri Nig. Ltd, with thugs and dangerous weapons which led to his arrest in 2019 to the Police Force Headquarters', Abuja. After being granted bail by the police, the suspect (Mr. Louis Okumagba) rushed to file a fundamental Human Rights action against the Police, at the Delta State High Court, sitting in Warri. The action stalled the prosecution of the suspect (Mr. Louis) by the Police.”

The families said the suit of the suspect against the Police was dismissed by the Delta State High Court, sitting in Warri, with a specific order of the Court directing the police to arrest and prosecute the suspect (Mr Louis Okumagba).

“While the Police were looking for the suspect for arrest and prosecution as directed by the Court, the same suspect went to social media (Opera news) to declare that “there will be looming danger of war/crisis between the Itsekiri and Urhobos”, thereby inciting, promoting and instigating communal war between the two peaceful co-existing communities of Itsekiri and Urhobo.”

This incitement, according to the families, created several apprehensions in the minds of locals, which has affected the hitherto peace that reigned and pervaded the two communities.

“Furthermore, the suspect posted on the same social media that some named members of our clients namely, Chief Gideon Okumagba, Stanley Oki, Chief Victor Okumagba, Engr. Prince Ojuvwu Okumagba and others, sent assassins to his house to kill him, but he escaped by the whiskers. He confirmed that he had a one-on-one confrontation with the assassins, who confirmed the named members of our clients above, as the people who commissioned them to eliminate him.”

The legal practitioners described Olodi, Oki and Ighogbadu as bunch of responsible families.

“Olodi, Oki and Ighogbadu families are known throughout Nigeria for their peaceful disposition. The named individuals are distinguished and respected members of the Okumagba family and the Nigeria Society. Our clients therefore take the allegation of hiring assassins by its members very seriously, especially in this era of Security challenges in the country.”

The families also deplored the actions of Louis Okumagba and urged the Inspector General of Police to use his good offices to investigate the allegations and anyone found culpable to be brought to book.

“So, if investigation reveals the named individuals as assassins or connected to the attempt assassination of the suspect, as he alleged, they should be so indicted and prosecuted. But otherwise, the law on criminal defamation as enshrined in the Criminal Code and status in Nigeria are still very potent and alive. We assure you of our client's co-operation with your men in the investigation of this petition.”